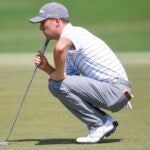 Justin Thomas has been working with Scotty Cameron since he was a junior golfer.

Outside of Justin Thomas himself, no one knows the ins and outs of his putter better than the man who has been creating wands for the former world No. 1 since he was a junior golfer: Scotty Cameron. The master craftsman reminisces about the first time he met Thomas, their Phantom X5.5 putter collaboration, and the importance of a welded neck in the latest edition of GOLF.com’s Gear Talk.

What was the impetus behind giving Justin Thomas the “Inspired by” treatment with this creation?

Scotty Cameron: It was simply working together with him over the years. With the last five years of wins and becoming world number one, it just seemed like the right time to do it with a really special guy, a cool guy. We’ve been asked, ever since he put that in play five years ago, a lot of people want that model with the welded neck. So it all came together and it turned out fantastic.

We’ve done putters with Tiger [Woods], Jordan [Spieth], [Brad] Faxon, Sergio [Garcia] and [David] Duval. Making a putter for a player started out when I was a kid, you always wanted the signature of Tom Weiskopf or Jack Nicklaus or the Arnold Palmer signature model. And those ended up being kind of a store-line type of deal. So going from a signature series or a signature, I wanted more of a “Inspired by,” which was kind of a takeoff of the signature series.

What was the process like working with him on this putter?

Cameron: I’ve worked with him in the studio because we can’t travel with COVID going on. We decided to do this a while ago. I have my couple of graphic artists that I work with in the studio. I started the process by asking him what his signature was like and pulling that up. We went to his foundation page and I pulled up his logo. We basically put things together and sent him on screen A, B, or C? Then it wasn’t two minutes he got back: C.

Then I did the front of the putter, boom. B. Then I gave him three options of headcover colors for the foundation, and it was A. And it was that simple and slick. But it’s funny, the last thing that he asked for, he wanted to see if it was possible to do a Circle T. And I said, “Not possible, but let me get creative,” so we took his foundation JT logo, and kind of put some half circles around each side to kind of mimic it. He was a gem to work with.

What’s the story behind the welded neck on this putter?

Cameron: Well, we normally don’t put a neck onto this head. It normally has a bent shaft. We have a low bend and we have a high bend, and the low bend performs very much like the toe flow of JT’s. People are adamant about having a welded neck, and the reason why it’s welded is that we wanted to get it done in a half-hour to go get back on camera, to see if he could line it up and stroke it any better.

And so that’s why originally it was welded. It was just my idea in the shop, a prototype. So we could make that putter without the weld, the neck, because it’s always welded from the bottom. You take off the bottom-weight, it’s welded underneath. But because JT has that neck and it’s welded, everybody wants that neck. So, every head is hand-welded from the bottom and the top of the neck. And with 2020 pieces, all of that hand welding takes time. Then we have to make that neck. So it’s the neck and the welding, and we have to engineer that now so the neck fits into a keyhole, all the way in that we can weld it when we take out that back weight.

How difficult is it to churn out more than 2000 putters based on something that’s specifically designed for a pro?

Cameron: Well, it’s pretty simple to make one, but when you have to make 2020 — there’s so much handwork involved. We mill it from the blocks and the aluminum, and the only way we can hit the weight is to have the aluminum in there also. Because if it was all steel, it would weigh like a brick. We normally get it within the weight of two paper dollars. It wasn’t designed to have a neck, so we redesign it to get the weight where it’s needed and then add the neck and add the weld.

What was his reaction when he saw the putter for the first time?

Cameron: It was after they played at Harding Park, and he came to Los Angeles for a photoshoot and marketing asked if they could bring one of the putters to show him and get his reaction. I wasn’t there, but on the video they took, I see him talking about the things we talked about over the last five years that he loved about the putter — low profile face, topline thickness. And you know, you don’t think he listens, but he listened to all those things that we had talked about — what I didn’t like, what he liked. And then the graphics and the color, the JT circle. He loved it.

What’s really funny is what transpired as they were shutting down the shoot. They’re taking down the folding chairs and all the stuff, he says, “Hey, can I take this stuff with me?” And marketing says, “No, you can’t. Those are the first articles.” But JT still ended up taking the putter with him. We had a call that day from our marketing guy saying, “Hey, Scotty, JT took the putter.” I’m like, “Well, man, he can’t show that before the release. He’s going to let the cat out of the bag.” So I text him: “JT, did you end up with the first putter?” And he sends back a smiley face with, “It’s awesome.” I guess it’s a good thing he liked it enough to take it with him.

How much did consumer interest factor into bringing this putter to market?

Cameron: We’ve felt the momentum of people asking for JT’s putter. You could have gotten that putter without the neck or the welded neck, with a spud, and a low bend or high bend. But they wanted JT’s version, so the demand is there. It felt like it was the right time, him becoming world number one. It just seemed like the right time. He’s worthy. He won with it; he’s won majors with it. The timing was right and I think the market is right. It’s a home-run product.

What do you remember from that first interaction with Justin? I know you guys have a relationship that dates back to when he was a junior golfer.

Cameron: Our rep Scotty Burke brought him in, and Justin had won everything as a junior. He came in with Scotty and his mother, and I do remember he was about nine or 10 years old at the time. Just the manners of, “Yes, sir,” and I asked him to call me Scotty. And big eyes. He was always wanting to learn. I remember Scott telling me, “It’s unbelievable the talent of this kid.” I took him around that day. We had studio open and Paul Vizanko was on the cameras with him and I was showing him around the back and what we could do for him. He was just simply a kid with bright, open eyes, with manners. And I love that he has stayed kind and humble. He is a gentleman of a kid now. And I call him a kid, he’s 27, but he’s just a little older than my daughter.