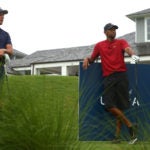 Phil Mickelson and Tiger Woods wait to tee off on the 10th hole at Medalist Golf Club.

Check in every week for the unfiltered opinions of our writers and editors as they break down the hottest topics in the sport, and join the conversation by tweeting us @golf_com. This week we discuss who the star of The Match: Champions for Charity was, how Tiger Woods looked in the event, how Medalist Golf Club looked and more.

Sean Zak, senior editor (@Sean_Zak): Phil Mickelson was the most entertaining aspect of the match, from the moment he missed the fairway with an iron on the 1st. He helped guide Brady back into form and smack-talked a quiet Tiger Woods. Unlike The Match I, Phil actually hit some great shots here, too.

Alan Bastable, executive editor (@alan_bastable): Phil, Phil, a thousand times Phil. That drive he parachuted over the trees and onto (and then just off) the green at the par-4 11th was an all-timer, made all the better by Brady holing the eagle putt — maybe a top-5 shot for Mickelson’s televised career, and yes, I realize this was only an exhibition. Mickelson was like a carnival barker out there, pepping up his partner, conducting short-game clinics and no doubt driving Tiger nuts. Justin Thomas was also surprisingly good. His Tiger story from the Presidents Cup was a winner, and he dropped the zinger of the day on Barkley when he called out Sir Charles’, um … less-than-svelte physique.

Alan Shipnuck, senior writer (@Alan_Shipnuck): Phil was indeed great fun, and Tiger entertained merely with his wizardly ballstriking, but I thought Peyton was the MVP, with his down-home charm, ace storytelling and rock-solid play that helped his team build a big lead on the front nine that ultimately proved insurmountable.

Zak: It did feel like 1 v 2 for a while there on the front, and that wasn’t all because of Brady. Peyton was impressive.

Josh Sens, senior writer (@JoshSens): I dunno. I think Brady was the most interesting. Watching him slap it around and struggle, going from brooding to upbeat, silent to smack-talking, he seemed so … human.

Dylan Dethier, senior writer (@dylan_dethier): Peyton’s play and commentary each exceeded expectations. He’s on the winning side, so he gets the MVP. Tiger looked really good too, though.

2. If social media was any indication, the Match was well received by viewers. But is there any element of the event/format/telecast that could have been improved upon, or done differently (note: please save your Brady takes for the next question!)?

Zak: Either Tiger’s mic wasn’t working well or Tiger wasn’t talking. Regardless, the broadcast felt lacking in the Woods department, though he made up for it with some impressive play. Would have loved to hear what he’s been up to, how much he’s been playing, etc.

Bastable: Agreed. It was almost as if Tiger didn’t want to be there (the same cannot be said for his game). We called this one pre-Match, but Brady and Manning didn’t get nearly enough strokes. Three shots was a joke. One blow per hole would have made things way more interesting on the front nine.

Shipnuck: I’m sure Tiger’s mic was fine, that’s just who he is in a competitive situation: enigmatic, brooding and totally focused. I would have liked to see a long-drive purse on every hole, which would have created a lot of tension between wanting to hit bombs and playing smarter to win the hole.

Bamberger: I would have liked to see the QBs play all the way into the hole just ONCE, on a long tough one. They’re good athletes, but golf into the hole is hard.

Sens: I would’ve liked to see more alternate shot. The recovery shot is the most exciting shot in golf, and that format gives you plenty of them.

Dethier: Good points, all! The format was a home run. Faster pacing out of the gate is the only other slight improvement I’d offer; those first six holes took nearly two hours.

3. Tom Brady was a wreck for most of the match (his hole-out on the 7th hole not withstanding) before finding his groove on the last few holes. Was his underwhelming play the biggest surprise of the day?

Zak: TB12 was shockingly bad early on, but as a mid-handicapper who has definitely been there, I started to feel bad for the guy. To me, the biggest surprise is how he couldn’t reset until he had holed out on 7. I would have figured he’d be able to scrape a bogey together before then.

Bastable: Amazing to me that a guy with six Super Bowl rings, who’s accustomed to playing in front of millions of eyeballs, could be that rattled. I mean, nerves can be the ONLY way to explain it, right? No way he would have broken 50 on his own ball on the front nine, even with the hole out. Even Brady-haters had to feel for the guy. We’ve all been there — only not with half of America watching.

Shipnuck: Nah, I’m an 8, too, and perfectly capable of hitting it sideways on any given day, and that’s without all the pressure and distractions built into this event. Brady had some great moments to balance the disastrous first seven holes.

Bamberger: He stands up well to the ball and he’s a good athlete and he’s strong, but that weak grip makes you so wristy and unreliable. Or so I’ve heard.

Sens: Not surprising. Given his handicap and the setting. Also when he said before the match that he’d played 18 holes that same day, I figured he was in trouble. Clearly, he was searching.

Dethier: I think the hole-out was a bigger surprise than the poor play. Brady shot over 100 at this same course last year, so some struggles were to be expected. But the hole-out? That was electric.

4. Sunday also marked the first time we saw Tiger on TV since the Genesis Invitational in February. Woods undoubtedly had command over his game. What did you take away from his performance?

Zak: He was very impressive and, frankly, he made that worst-ball 66 from a few years ago seem like the norm. Man knows his way around Medalist, that’s for sure.

Bastable: Game was airtight from tee to green, but his driver was the most encouraging element. Absolute smoke show. If he can keep that going through the summer and into the fall, major No. 16 could well follow suit.

Shipnuck: Yep, he couldn’t have swung it any better: great rhythm, perfect balance, smooth transition. His short-game wasn’t that sharp, but that will come. Agree with Bastable: Tiger’s play makes the rest of this season much more intriguing.

Sens: At this point, as we’ve said many times before, it’s all about his health, which, given how suddenly things can change, makes it very hard to predict. But if he stays pain free, we’ll see another major out of him in the next four played.

Dethier: He hit the ball low and with impressive control. Also, he disappeared. I was struck by both those things — he seemed more than content being the best golfer and quietest entertainer in the foursome.

5. Medalist lived up to its fearsome reputation — its forced carries and bunker-lined fairways certainly put a scare into Brady and Manning, anyway. How would you assess the course as a tournament site?

Zak: Well, we know it’s not great for non-pros, but I think it would be a fun one-off site for the Honda Classic one of these years. I think I speak for many people when I say it would absolutely take my lunch money … perhaps even on a good day.

Bastable: Course was too damn hard, bringing to mind the last big-time exhibition there, in 1995, when Nick Price and Greg Norman (Medalist co-designer!) had their shins kicked in. I know the venue was Tiger’s choice and we could see why, but for players of Brady’s and Manning’s caliber, it was no bueno. The QBs must have lost two sleeves between them. Next time, go play Streamsong. Even Brady could hit those fairways.

Shipnuck: Definitely a great test of golf … and not one I’d be eager to play!

Bamberger: I’ve played it, I was there for the Shell event. Not easy on either side of the ropes, to say the least.

Sens: For a Tour event, yes. It’s also entertaining to watch those guys up against a serious test. But for a charitable match, I’m with Alan. We heard Brady speaking Spanish (Agua! No bueno!) too often today.

Dethier: I didn’t think it was too hard, since it was fun to watch these guys battle the elements. I wish it wasn’t so saturated. I wasn’t struck by an immediate desire to go play the course. In all, it looked good but not crazy-good. Still, cool to see Tiger at his home track.

6. We always learn something new about players’ personalities when they’re mic’ed up for 18 holes. What did the Match II teach you about Tiger and/or Phil?

Zak: It reminded me that Phil should go into acting in retirement and Tiger’s best selling point — his ball-striking — hasn’t changed. At this point in his life, Tiger isn’t going to be a flamboyant player in any match. But he’s still one of golf’s greatest competitors, so he’ll make for a great Ryder Cup player-captain despite being quite boring in these made-for-TV matches.

Bastable: Tiger’s reservedness spoke volumes. He was on his home course, 20 minutes from his Jupe home, and striping the ball. He should have been an ambassador, full of chirp and good cheer, but he didn’t embrace that role. Weird, just didn’t seem himself — by which I mean his 2018-20 self.

Shipnuck: It’s like Tiger knows he can’t out-chirp Phil so he just shuts down. Especially with no fans in the beginning, the Tour is going to have to try harder to deliver for fans. This exhibition showed it would be crazy not to mic up Phil and JT and others … but don’t waste the Duracells on Tiger.

Bamberger: Agree, Alan. Tiger plays golf to beat people. He’s not there to entertain you. Phil is.

Sens: Well said above. I don’t think we really learned anything new. What we already knew was reinforced.

Dethier: Phil seemed to genuinely be having fun, which was telling, because I wasn’t sure the last time around. That twinkle in his eyes is reserved for a strange few entertainers in the sports world.