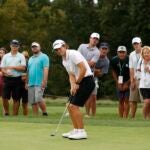 The yellow line on the flange of James Piot’s Ping i-Series Piper H putter has faded with age. It’s a custom alignment aid that was added to the putter years ago by the U.S. Amateur champion after his dad cast the putter aside following a brief run that failed to produce enough magic on the greens. (We’ve all been there.)

“He used it for like two weeks and was like, ‘This thing is not worth it,'” Piot said.

Around the time Piot was in middle school, he picked up dad’s castaway putter and gave it roll.

“I was like, ‘This thing is actually awesome,'” he said.

From that point forward Piot and the “garbage putter” were nearly inseparable.

“They actually nicknamed it the garbage putter, because I got line drawn on it and it’s just — it’s not the best looking thing.”

Piot used the putter almost exclusively through junior golf and much of high school, but even when he shelved it for something else, he always returned to the worn wand.

Looking for a change of scenery on the greens earlier in the summer, Piot retreated to the basement to find something that could help him get through U.S. Amateur qualifying. There, situated amongst a sea of other potential options, was the “garbage putter.”

“I was too cheap to go buy a putter, so I looked in the basement,” he said.

The putter has been anything but garbage since it earned a spot back in the bag. Piot shot 62 and tie for ninth at the Southern Amateur, then reached the Sweet 16 at the Western Amateur before winning the Golf Association of Michigan Championship the week prior to the U.S. Amateur.

On Sunday afternoon at Oakmont, Piot’s putter once again got the job done as he rallied from 3 down at the turn — winning four straight holes — to defeat Austin Greaser, 2 and 1. The incredible finish included a 20-footer for par on the 17th hole to close out the match.

“It’s survived a lot, believe me,” Piot said of his trusty putter.

After a summer to remember, the “garbage putter” is here to stay.

Phil Mickelson will forever be known as the king of the two-driver setup. The 6-time major winner remains one of the select few who found success with two big sticks in the bag, employing a pair of 9.5-degree Callaway Big Bertha Fusion FT-3 on his way to winning to the 2006 BellSouth Classic by an astounding 13 shots — and the Masters.

The latter is probably more impressive by a small margin.

What Mickelson learned along the way is that there are benefits to carrying two of the same club. In his case, it was to produce a draw and fade off the tee at Augusta National.

The setup hasn’t produced a win for Frenchman Damien Perrier, but he’s been doing his best Mickelson impression this season — with a slight twist. Instead of simply playing identical drivers with different characteristics, the European Tour pro has been employing a mix of old and new school with a combo consisting of Titleist’s TSi3 and 913D3.

No, your eyes aren’t deceiving you; Perrier is still playing a driver that’s nearly a decade old.

“I have been using the two drivers set up for all 2021 and considered it in 2020 on a few occasions depending on the course setup and my needs,” Perrier told GOLF.com. “The actual length for these two is basically original which is 45 inches, I believe, for the TSi3 and a little shorter for the 913 (44-and-a-half).”

So what’s a pro doing with a driver from 2012? According to Perrier, difficulty locating a “fairway finder” 3-wood led him to try a second driver last year to boost his confidence. Instead of adding a second TSi driver, Perrier found the older 913D3 produced ideal numbers as a secondary option off the tee.

“When I want to maximize the chances to reach the fairway when I’m not 100 percent comfortable, I will go with 913,” he said. “It has a less aggressive ball flight (167-173 mph ball speed) for decent distances and also my spin is about, on average, 400-500 RPM higher than the Tsi3 for a softer landing and release in case I’m playing a course that requests to shape the ball both ways without crossing the run-outs.”

Simply put, Perrier’s 913D3 is essentially a 2-wood with a larger profile (445cc). When he has more room to bomb it, the TSi3 comes out of the bag. But when the tee shot requires the ball to end up in the short grass, the 913D3 gets tapped.

“[Even] as modern golf requests us to hit it further, as a pro you still want to keep control of your game reaching fairways,” he said. “It’s necessary on the European Tour with the thicker roughs and firmer greens.”

Rickie Fowler isn’t the only pro with a putter from Tiger Woods’ “old Scotty Cameron stock.” Ross Fisher made a putter change at the European Tour’s Cazoo Classic and for those who caught a glimpse of the wand, it likely made a few do a double-take. While the deep milling on the face of Fisher’s putter looks closer to what’s currently found on McIlroy’s 009M, the overall shaping, face height and “Cherry bombs,” are identical to Woods’ iconic Newport 2 GSS.

According to Titleist, Fisher was one of the lucky few who received a Newport 2 head from the backup stock that was once reserved for the 15-time major winner. Fisher returned to the putter last week at London Golf Club, but he’s had this particular flat stick in his possession for five-plus years.