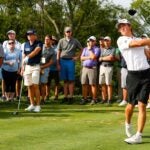 James Piot was facing the biggest deficit of the match, by any player, with just nine holes remaining in the 121st U.S. Amateur. And then he flipped the script.

Piot won four straight holes to retake the lead and never lost it, beating Austin Greaser 2 and 1 in the U.S. Amateur final on Sunday at Oakmont Country Club in Pennsylvania. With the win, Piot now has invites to next year’s Masters, U.S. Open and Open Championship.

Piot, a Michigan State senior, and Greaser, a North Carolina junior, saw little movement to start their 36-hole final on Sunday. Piot went 2 up on the 11th hole, but that didn’t last when he lost the 12th with a bogey. They traded 1-up leads until Greaser went 2 up on the 22nd hole and then made it 3 up with his par on the 27th. With nine to play, Piot was 3 down.

But he won the next four holes with two birdies and two pars, using a mix of superb play while also capitalizing on his opponent’s mistakes to go 1 up with five remaining. He won the 33rd hole with a par to go 2 up and then held off Greaser and closed it out on the 35th.