Unlike that actual swinging of a golf club, which requires a complex combination of technique and athleticism, putting is a simple art. It’s not a huge physical movement. If anything, it’s more mental. Pick the correct line, hit the ball on that line, with the right speed, and it might go in.

But simple doesn’t mean easy. Pros spend hours upon hours practicing, often using specific drills. Here are a few of the most common…

Using a few tees — either by placing them outside the heel and toe of your putterhead, and/or trying putt your ball through a set if tees — is a very common way pro golfers practice. It’s quick to set up, and it’s a simple way to make sure your putter is moving on a good path, and your ball is starting on your intended line.

A handy tempo tip here. If you’re worried your stroke is too uneven, especially in transition, place a coin on the back of the putterhead. As renowned putting coach Phil Kenyon suggests, try throwing the coin away from the target.

If you struggle with a slow backswing and transition, then a great drill is the coin drill. Try and throw the coin away from the target as you approach backswing and in transition. Some of the best putters have their peak acceleration in transition. This drill helps create a feel for that. @martinkaymer59 demonstrating the drill nicely. #philkenyon #mikekanski #puttingsolutions #puttingelements #leesullivanputting #davidangelotti

This is probably THE most common drill I see PGA Tour players practicing. And the best part is that it’s so simple. Pick one hole, stand anywhere from three to five feet away, and work your way around the hole like a clock.

One of Tiger’s favorite putting drills doesn’t involve a putter at all. He hits a few putts with a wedge to get the feeling of “blading” his putts, which helps the ball roll end-over-end.

An easy distance-control drill that’s perfect for those struggling with their lag putting. Find a hole, place a club or flagstick about two feet behind it, back up to 20 feet or so and hit putts. You goal is to have your ball finish either in the hole, or past the hole but not touching the club behind it.

Here is one of my favourite golfers/instagrammers @fredriklindblom coming in hot with probably the best drill you can do to both test and develop your speed control. Do this drill as Fredrick does in the video at 10, 20 and 30 ft as well as at 4,5,6,7 and 8ft feet so you are both testing and developing you speed control over all distance ranges. This drill is also a great one to do when you hit the course to test the speed of the greens!

6. String over ball and line

This one requires some assembly, but erecting a string over your ball, putter and line accomplishes a few things, which is why so many pros do it:

Try this putting drill the next time you’re on the practice green.

The simplest drill on this list is also one of the most effective, and it’s Tiger Woods-approved, so there’s no excuse not to try it.

All you have to do his hit putts one-handed. Either hand will do, but most use their trail hand, which will help you feel the putterhead release.

If you prefer a stroke that’s closer to straight-back, straight-through, Follow Sungjae I’m’s leadd and place a club or alignment rod along the heel of your putterhead. If you hit the object, you’ll know your stroke is arching too much. 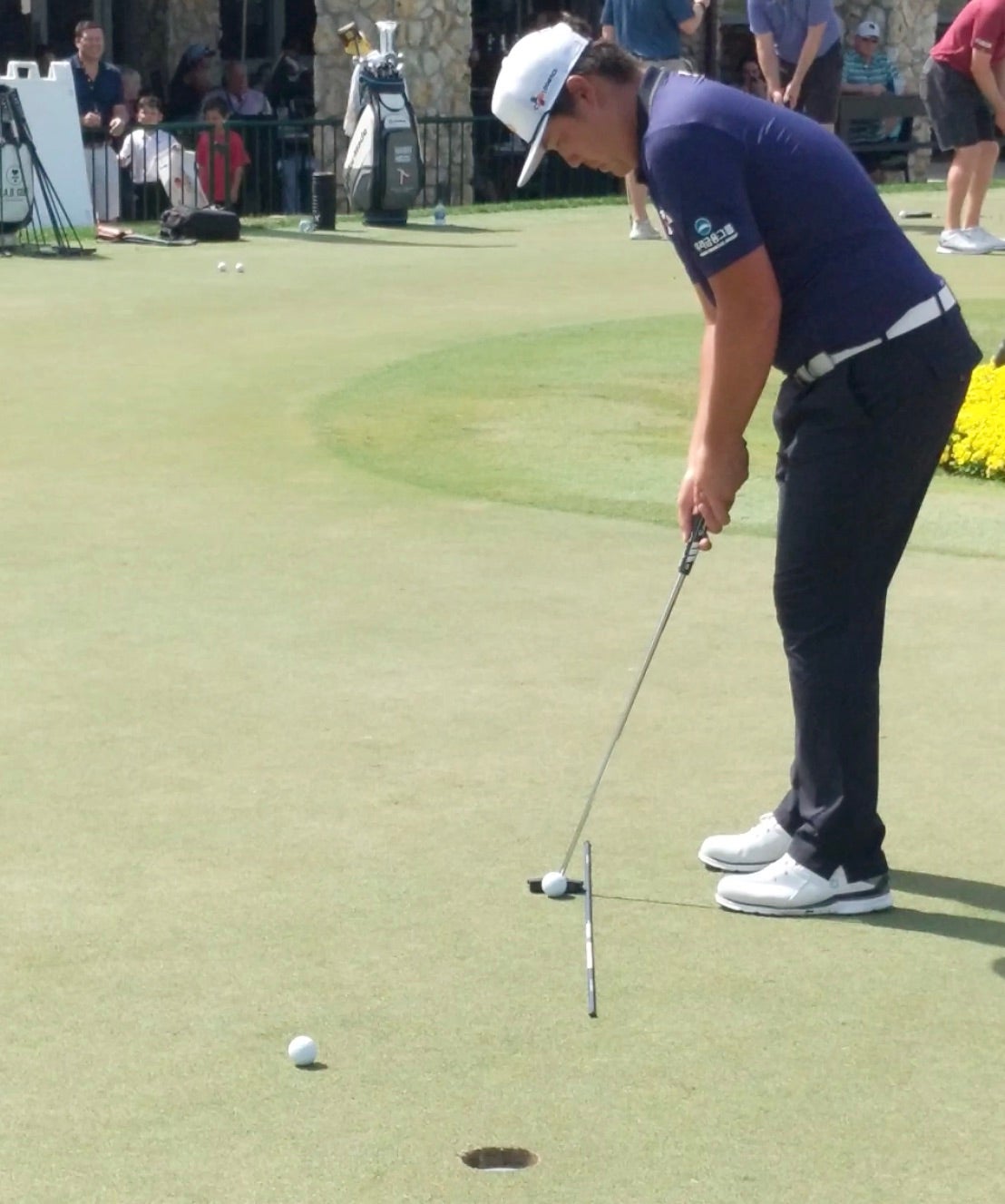 Another way to practice a straighter back, straighter through stroke is to use two clubs (or alignment rods). Place them outside the heel and the toe, and putt through them like they’re train tracks. 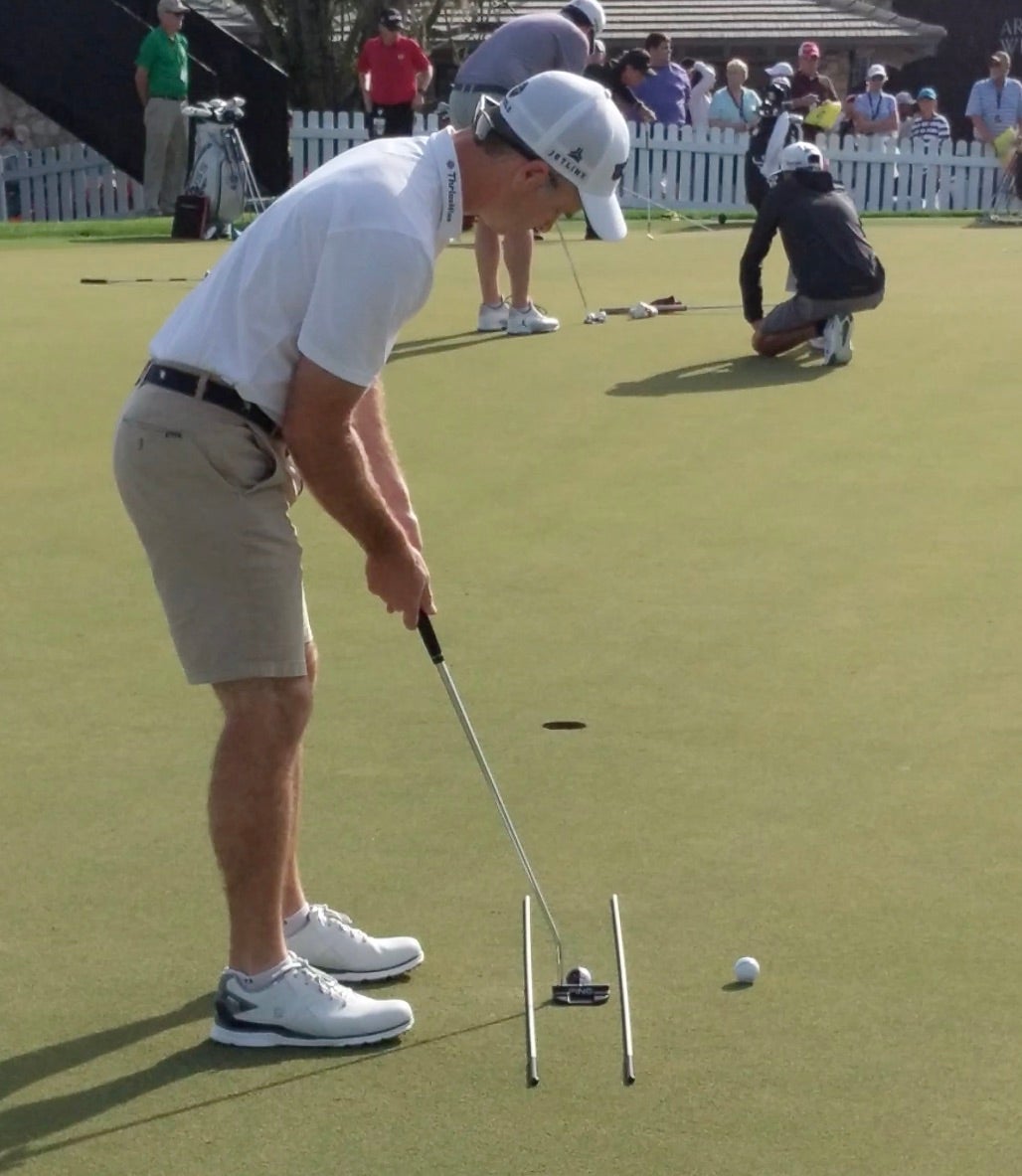 Drawing a chalk line on the ground accomplishes mostly the same thing that a string does. It doesn’t help you check to see if your eyes are over the ball, but it also doesn’t obstruct your view like the string does, which some people prefer.