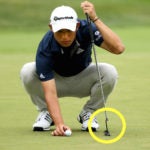 The neck of a putter refers to the area of the club that connects the shaft to the club head.

Collin Morikawa’s win at the 2020 Workday Charity Open was with a newly-adjusted, long-neck putter, which can be a teachable moment for two reasons:

Ahead of his recent victory, Morikawa switched back into a long-neck TaylorMade TP Juno putter (the neck/hosel of the putter stretches farther up the shaft than on normal plumber’s neck putters). Before we get into how a long-neck putter could be beneficial for your game, let’s take a look at how Morikawa ended up using that putter to win, and why fitting matters so much.

Recently, Morikawa joined our Fully Equipped podcast to discuss equipment, and the subject of his putter came up. Over the last year, Morikawa has been searching high and low for a putter that suits him. He said he’s tried a number of different TaylorMade putters, including Spiders, the new Truss options, Junos and Sotos.

“For me, I like messing around with different shapes and things but I think what I’ve come to realize is I need a putter that just sits nicely in my hands,” Morikawa said. “So when I put it down I don’t have to adjust my body or anything, it just naturally sits to where I want my hands to be, where I want my body and eyeline to be.”

While reviewing videos of his stroke during quarantine, Morikawa noticed his putter was sitting with the toe up in the air.

So, Morikawa alerted the TaylorMade team to the issue. In order to fix the problem, they flattened the lie angle of his long-neck Juno putter, which Morikawa had laying around from when he used it at the 3M Open last year. And just like that, Morikawa found his winning putter setup.

“It actually brought my hands a little more vertical, which is weird, but it brought them in a place that just feels comfortable,” Morikawa said of the putter changes. “I don’t have to adjust anything….my putter’s already nice and flat to the ground.”

As for the putter design itself, we wanted to break down who the long-neck style is right for. Tim Briand, Senior Vice President for GOLF.com’s sister company True Spec Golf, explains.

“[A long neck design] basically changes the face-balancing of the putter,” Briand said. “Anything that has a long stem in the hosel, especially on a plumber’s neck, is going to move the center axis of the shaft to run more through the center of the face, which by definition is going to make that more face balanced, in general.”

According to Briand, face-balancing is great for golfers who tend to push putts; for a right-hander, that means missing putts to the right. He says that face-balancing can work to help golfers square the face more easily at impact.

Therefore, if you’re someone who likes playing a blade-style putter, more specifically with a plumber’s neck, and you tend to leave the putter face open at impact, then give a long-stem plumber’s neck a try.

In case you missed it, check out our full podcast and interview with Morikawa below!