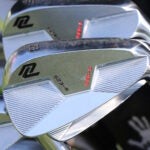 On the PGA Tour, most players use clubs made by name-brand manufacturers. It’s rare to look into the bag of a PGA Tour player and see a logo from a brand that’s largely unfamiliar to the general golfing public.

While each player has their own motivations for choosing certain equipment, their reasons typically boil down to some combination of money, trust and availability. The big companies have been in business for decades, so they’ve built trust among golfers through success and reliability. They also have money, which helps companies 1) develop products that perform for the best players in the world, 2) pay those players to use their products in competition, and 3) fund teams of club builders and fitters to travel to PGA Tour events and help players get the exact products they need.

It’s no wonder that equipment manufacturers with smaller budgets have a difficult time competing with bigger brands for a spot in the bag of a PGA Tour player. But every now and then, you’ll see clubs make it into a player’s bag that aren’t made by a household name.

Currently an equipment free agent, Moore told GOLF.com on Tuesday at Silverado Resort and Spa (host site of the Fortinet Championship) that he’s been searching for the right irons all year. Throughout most of 2021, Moore relied on Mizuno MP-18 irons, but New Level Golf’s 623-M irons caught his eye in a unique way… or, at least, a unique way for a professional golfer. Apparently, Moore is just like a regular golf consumer who learns about golf clubs through websites and online videos.

“I saw one of the independent review places and they actually rated the clubs really high compared to everything else,” Moore told GOLF.com. “Some of that stuff is nice to see sometimes – an unbiased opinion. I hit them and actually really liked them.”

Eric Burch, the founder of New Level Golf, told GOLF.com that Moore’s management group reached out to New Level recently because Moore wanted to try the irons. New Level then made two different sets of 623-M irons for Moore upon his request (one was made with Moore’s longtime True Temper Dynamic Gold Lite X100 gamer shafts, and the other with prototype True Temper Elevate shafts).

New Level launched its first production run of irons in 2018, and the 623-M muscleback models that Moore has in the bag this week launched later that same year. The 623-M irons are one-piece forgings made from 1020 carbon that are then CNC-milled. Like other small-headed player’s irons on the market, they have thin toplines and reduced offset, which better players often prefer, but they have slightly wider soles and milled tuning slots in their cavities to lower overall center of gravity (CG) and increase feel, according to the company.

“I’ve absolutely loved them so far,” Moore told GOLF.com. “I haven’t played them in a tournament yet, but I loved everything at home practicing and playing, and they’ve done everything I want an iron to do.”

Both Moore and Burch each confirmed that there is no sponsorship deal or revenue sharing agreement in place between the parties. Moore was simply curious about the irons, New Level supplied him with two sets, and Moore is deciding to use the 623-M irons this week in Napa.

While not all PGA Tour players are willing to try out irons from boutique brands, Moore has a history with using golf clubs from various manufacturers, ranging from smaller brands such as Scratch Golf, to more mainstream companies such as PXG and Ping. In his words, Moore is “not afraid to try different stuff, I’ll just say that.”

Want to try these somewhat mysterious irons out for yourself?

Well, that may be a difficult task. The 623-M irons are sold out on the company’s website, and Burch says the company only has leftover stock set aside for Moore and professional golfers on other tours. New Level is, however, releasing a new lineup of clubs in November, according to Burch.

While Moore’s particular irons aren’t necessarily readily available, there’s an important lesson to learn here. The best equipment for your game isn’t necessarily what you see other golfers using, whether it’s on the PGA Tour or your home club. It’s imperative to get with a trusted fitter or local professional to try out as many options as possible to find out what you like and what performs best for you.

Don’t be afraid to try anything and everything when it comes to golf equipment. Experimentation is a crucial (and fun!) part of the process to playing your best golf, and you just never know what’s going to work until you try.