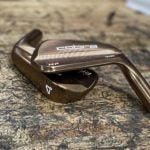 The return of golf’s megastars on Sunday at TaylorMade’s Driving Relief charity event will have a completely different look than what viewers are accustomed to seeing when they tune in to televised tour coverage. A skins game format. No caddies. Sunday bags. A lot has changed since professional golf went on hiatus at the Players Championship.

While the players haven’t been competing on the course, some have been working on their gear behind the scenes. That includes Rickie Fowler, who plans to debut a new set of Cobra RF blades at Seminole Golf Club. The irons have an identical look to the “RF Protos” he put in play at the end of last year, but instead of sticking with a traditional steel finish, Fowler chose to go outside the box and select a bronze-gold finish that’s unlike anything in the marketplace.

“He had a vision in his head of what he thought would be really cool, unique and pleasing for him to look at,” Ben Schomin, Cobra’s tour operation manager, told GOLF.com. “I spoke to R&D and told them this should just be his golf club. We’re making it for him anyway, so any tweaks or changes should be his.”

The iron creation process for Fowler’s new blades started two years ago, but according to Schomin, it really started to pick up steam when the 5-time PGA Tour winner made a trip to Cobra HQ ahead of the 2019 Farmers Insurance Open. During the visit, Schomin and Fowler went through the archives and looked at old blades to gather inspiration, but the more they looked at old product, the more Fowler realized he wanted to go away from the conventional muscleback blade look and build his set around one club in particular: the 7-iron.

“I remember him telling me, ‘I really love the 7-iron, it’s the best-looking club in the set,'” Schomin said. “But to him, everything below the 7-iron didn’t look nearly as good in the address position. So we built the set around that one club in particular, trying to give those clubs in the bottom of the set a similar look.”

While at headquarters, Schomin took a set of old muscleback heads and started grinding each one to establish a baseline — how it looked at address — for where Fowler wanted to start with each iron in the set. The process lasted until dinnertime.

From that point forward, Fowler’s irons underwent 33 additional revision (most of them rapid prototypes) — if you’re wondering what the significance is behind the “Rev33” on the head — before the first hittable version was machined in-house, from 304 stainless steel, prior to the 2019 U.S. Open.

Many of the changes are subtle enough for only Fowler to notice. However, there are a few that the average elite amateur should be able to pick up on when these irons eventually come to retail later this Fall, starting with the flat topline that was designed around the look of Fowler’s 7-iron.

“The topline being flat (or straight) from the toe to the par area in the throat of the club is different,” he said. “If you look at the 7-iron at address, it’s like, OK, that looks kinda crazy. It’s got no loft to it, looks pretty square and has a flat topline. But it’s not outrageous or out of the ordinary. Then you get down into the 8, 9 and pitching wedge and you can tell it has a very unique look to it. But that’s what he was envisioning, wanting the rest of the set to look kind of like the 7-iron.”

Rory McIlroy has already commented on the other alteration to Fowler’s irons, a significantly straight transition from the hosel into the leading that makes it appear the heads have onset. In actuality, Schomin said the irons have some semblance of offset, but it’s nearly impossible to spot with the naked eye.

The lack of offset comes from a parallel hosel transition that differs from the standard tapered transition where the hosel is thickest in the upper section and thins out going into the score lines. Using a uniform thickness throughout the hosel gives the head minimal offset, although Schomin noted the back of the head and muscle had to be cleaned up to ensure the proper flow.

The tungsten plugs found in Fowler’s previous sets will once again play a role in his latest creation. So, too, will the sole width and contours that deliver his preferred turf interaction for each individual iron.

“There are some things he wanted to change, but when it came to performance, he didn’t change any of that,” Schomin said. “It’s basically identical to his old stuff.”

As for the striking PVD finish, Schomin confirmed it won’t wear out over time. After the color was selected from a book with 30 different metal swatches, Fowler put the finish through its paces — Schomin did as well, blasting hundreds of bunker shots to see how it held up during a trip to see Cobra staffers Fowler and Jason Dufner — to ensure it wouldn’t wear over time.

“Rick’s been working hard on these irons,” Schomin said. “It’ll be cool to see the final version in play this week. They are certainly unique.”