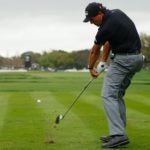 Phil Mickelson's iron composition is one to copy, especially if you're a mid-handicapper.

When Phil Mickelson takes to the course on Sunday for the Match II, he’ll do so with an iron setup that should look very familiar to some recreational golfers. With more manufacturers designing different irons that can be blended to create a fully-optimized set, even players of Mickelson’s caliber are embracing the opportunity to put two or three different iron models in the bag.

That brings us to Mickelson’s current iron setup, which consists of a combination of Epic Forged (4-7) and Apex Pro (8-PW). The Apex Pro won’t raise any eyebrows, but the sight of an elite ball-striker playing Epic Forged — an iron designed for a wide range of handicaps — all the way through the 7-iron is something that should make golfers take notice.

If you’re unfamiliar with Epic Forged, it’s loaded with game-changing technology, including Callaway’s Callaway’s 360 Face Cup that delivers significantly faster ball speeds. There’s also a tungsten core wrapped in a TPU material that’s suspended in urethane microspheres to absorb unwanted vibration without impeding clubface flex at impact. In other words, this sleek iron has it all. It’s built for distance.

And yet, a five-time major winner sees the benefits of using it not just at the top of his set, but through the mid irons as well. Professional golfers are usually averse to adding more distance in the name changing their tried and true yardages, which brings us to an important lesson that can be gleaned from Mickelson’s setup: Consider the idea of going outside your comfort zone when putting together a blended set.

“[Phil’s] not afraid to piece it together,” Callaway senior Tour representative Johnny Thompson said on GOLF’s Fully Equipped podcast. “He’s had sort of that combo look for a while now. I think a 15-handicapper who might need a little help with the longer clubs — elevating the ball and getting it up in the air — if they want to use a game-improvement 3-, 4- and 5-iron, but then a middle-of-the-road, like your standard Mavrik 6-iron through wedge.

“I think Phil shows you don’t have to stick with one model [3-iron] through [pitching wedge]. I think it’s cool that he’s not afraid to find each part of a set that works best for him. He’s not afraid to mix it up. He creates his own combo sets.”

Mickelson has used as many as three different iron models at one time, which might seem excessive for some golfers. However, if there’s a benefit to be found by having one or two clubs from a particular model — a setup Daniel Berger has had success with in the past — it might be worth entertaining the idea of adding them to fill a gap.

One other thing to consider if you’re going to use different iron models? Check the loft specs to ensure they transition seamlessly through the set. Some brands are keeping a close eye on lofts for those who want to try a blended set, but if you’re considering a glorified game-improvement model at the top of the iron composition, you’ll need to make sure there isn’t a yardage hole due to the significantly stronger lofts. (Note: It’s OK to bend your irons up to 2 degrees to tighten any loft gaps, but anything beyond that number will negatively affect turf interaction.)

So go ahead and consider the idea of copying Phil Mickelson’s iron setup. It just might make you a better iron player in the long run.