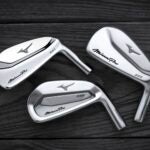 The Mizuno Pro name is coming to North America.

Diehard gearheads are naturally going to get excited by the Mizuno Pro scripting on the back of each head. How could you not? The scripting used to be a way to differentiate the Asia-only Mizuno Pro from the MP line found in North America. The Mizuno Pro line brought us the buttery-soft TN-87, which was designed around a traditional blade profile that featured a thin layer of copper just below the chrome to deliver a softer feel.

But unless you lived in Asia or had connections to secure a set of Mizuno Pro irons, golfers stateside were left out in the cold.

Mizuno has since released a North American version of the MP with the distinctive copper underlay, but the Mizuno Pro name remained Asia-only — until now. In an attempt to bring the brands together, the Mizuno Pro name will now be available in the States on the new 221, 223 and 225 irons.

While it’s easy to assume all three models possess many of the traditional traits we’ve come to know and appreciate from Mizuno Pro, the latest creation is anything but classic.

“This line really doesn’t lean towards history,” Chris Voshall, Mizuno’s head of product, told GOLF.com. “It has a much bigger lean towards what’s coming. There’s only one traditional club in the whole range — 221. The true essence of Mizuno Pro isn’t to be stuck in history, it’s to make it. The same guy who’s going to be excited to see the old Mizuno Pro logo is going to be blown away that this 223 goes farther than any iron that looks like that he’s ever seen.”

Mizuno continues to look towards the future, but it’s impossible to completely forget the past. It’s one of the reasons why the 221 exists in the lineup. The true muscleback is built for the traditionalist who doesn’t require noticeable distance increases.

Forged from a single bar of 1025E mild carbon steel, each head undergoes a grain-flow, high-density forging process that keeps the metal grains intact from heel to toe for a pleasing feel at impact. Improving feel further is a thin layer of copper — it’s also part of the 223 and 225 designs — resting just below the carbon steel.

“This is the evolution of the blade,” Voshall said. “It’s everything the better player is looking for. We’ve made some nice refinements, but it’s the true muscleback in the line.”

The refinements begin with the removal of mass from the heel and toe sections to thicken the muscle pad. Adding discretionary mass to the back of the head tunes the harmonics to produce a more muted sound at impact elite ball-strikers should appreciate.

While the 3- through 6-iron blade length has remained unchanged, the 7-iron through pitching wedge (46 degrees) now features a slightly more compact profile. The topline includes an aggressive bevel that makes it look visually thinner in the address position.

Mizuno Pro 223 isn’t your standard cavity-back offering for the better player. In fact, it could be debated no club in the lineup made a bigger leap than 223.

“This iron took a dramatic step from where we’ve been in the past,” said Voshall. “This middle club in the lineup has evolved aggressively over the last number of generations. The middle club was the split cavity, which was just a slightly larger blade with a cavity in it. It was SC with MP-18 and MMC with MP-20, which was our Ti muscleback construction. The MMC was great at distributing weight around and pulling the center of gravity back for a higher launch and more spin, but there was no COR gain whatsoever.”

With Mizuno Pro 223, distance won’t be an issue. During recent player testing with 223, GOLF.com’s Andrew Tursky saw more than a mile per hour ball-speed increase with the new iron when compared to the previous generation. While the overall look remains constant throughout the set, Mizuno engineers made sure the long and mid irons had some extra oomph.

The 4- through 7-iron are forged from a high-strength Chromoly material that allowed the face to be thinned to flex more efficiently at impact for additional ball speed. A slot was also added in the lower section of the longer irons to further enhance the trampoline effect, particularly on shots struck low on the face. The slot is covered by a badge in the back cavity to keep debris out and gets progressively thinner as it gets into the scoring clubs.

The short irons (8-iron through pitching wedge) are forged from 1025E mild carbon steel — the same head material as 221 — and feature solid construction. In addition to possessing a noticeably more compact profile than the MP-20 MMC, the thin topline, reduced offset and narrow sole should appeal to the better player who requires a touch more forgiveness.

Mizuno’s MP-20 HMB was initially designed as a long-iron replacement that eventually turned into a full-blown set. With Mizuno Pro 225, the decision to create a complete set was purposeful. The overall look was refined to give 225 a more blade-like appearance with reduced offset and a thinner topline.

But don’t let the svelt profile fool you: the 225 is packed with forgiveness. Similar to the 223, the set consists of two different head materials, beginning with a forged 4135 Chromoly face in the 2- through 7-iron that’s extremely thin to ramp up speed.

“This is the evolution of the MP-20 HMB iron you’ve seen before,” Voshall said. “We’ve made some really nice refinements to this one as well, and a lot of that’s where we’ve started the design from. It’s a perfect execution of that hollow-bodied construction, but in a more blade-like profile that performs nothing like that.”

Tungsten weights housed inside the heel and toe of the hollow cavity — roughly 28 grams per head — are meant to increase launch and improve the overall stability of each head.

While it’d be easy to continue to multi-material design into the scoring clubs, Mizuno chose to keep the cavity hollow in the 8-iron but remove the tungsten. From there, the 9-iron through gap wedge (49 degrees) transitions into a half-hollow construction forged from 1025E mild carbon steel.