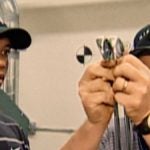 Tiger Woods and Mike Taylor made magic together throughout the 2000s.

Perhaps the greatest irons player of all-time, Tiger Woods, has long had a wizard behind his golf clubs. That man behind the curtain works in a Fort Worth shop where he carved Woods irons out of blocks for more than a decade.

That man is Mike Taylor, who used his particular brand of Texas sorcery to perfect Woods’ initial Nike irons. You see, our man TW, particular as ever, didn’t initially fall in love with his new set. The feel wasn’t there. It’s a tricky thing to get right, but Taylor was the man for the job.

How’d he make Tiger’s irons feel right for the greatest ball-striker who ever lived? How’d he get in that position to begin with? And what was it like, making irons for the greatest irons player of all time? You can find out by listening to this episode of the Drop Zone. Equipment Editor Jonathan Wall takes us behind the curtain — inside Taylor’s shop — and tells the story of how a master craftsman helped Woods make magic of his own.

But back to those irons. You’ve seen the commercial before: Tiger Woods’ headcover, Frank, is yapping to him at a barbershop. Tiger is getting his hair cut and Frank, well, his fur is being “cut,” but Frank goes on and on about the “tungsten plugs” in Nike’s new fairway wood. Well, that tungsten insert is exactly what Mike Taylor was introducing to Woods’ irons.

According to Taylor — outlined well in Wall’s feature story — the tungsten inserts were welded into the steel iron heads. The tungsten was inserted with a TIG welder and led to what Woods described as better “feel.”

You get the feeling, no pun intended, that feel is a difficult thing to produce, but Woods and Taylor had quite the bond. Taylor helped fashion irons and wedges for more than 15 years with Woods at Nike. If anyone could do it, he’d be the guy. Lo and behold, Taylor’s new tungsten-ized irons were not only cherished by Woods, they also helped push the center of gravity to the middle of the clubface. What was good for Woods would go on to be good for Nike. And what was good for Woods and Nike was great for Taylor.

For more on their bond, check out the feature story in this week’s episode of the Drop Zone. Follow wherever you listen to podcasts: iTunes | Spotify | Soundcloud | Stitcher