The club behind Hal Sutton’s ‘Be the right club today!’ moment 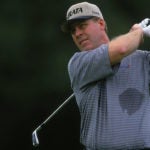 Hal Sutton's most famous moment has plenty of Ben Hogan behind it.

“Be the right club today!”

On the 72nd hole of The 2000 Players Championship — battling Tiger Woods in his prime down the stretch — a 41-year-old Hal Sutton hit an unbelievably clutch 6-iron into the 18th hole at TPC Sawgrass to seal the tournament. While the 179-yard shot was in midair, Sutton begged the distance to be right, and it was.

Certainly, it’s one of the most famous 6-irons ever hit, and Sutton still has that 6-iron in his club collection at home. Recently, Sutton shared a photo of the Ben Hogan Apex iron to his Twitter followers.

The photo revealed that his custom iron had his initials stamped into the back cavity. As an equipment junky, I needed to find out more about Sutton’s irons, and what made them different from stock Hogan Apex irons.

Luckily, I was able to get in touch with the man responsible for the custom work on the iron: Ronnie McGraw.

McGraw started working with the Ben Hogan Golf Equipment Company (BHGEC) in 1980 as Gene Sheeley’s assistant; Sheeley, of course, was (player) Ben Hogan’s legendary personal club maker. McGraw started with the company by helping introduce new iron models to Tour players at professional events and working with R&D. Later on, he ground irons and wedges for Tour players himself, and he still works with the company today.

Sutton turned pro around the same time that McGraw joined BHGEC, and started using the company’s irons. Sutton had a deeper connection to Hogan than just the clubs he played, however.

Growing up, Sutton’s father got his son a membership to Shady Oaks because he wanted his son Hal to learn from Ben Hogan, according to McGraw. That’s where Sutton took personal golf lessons from the man himself.

“Hogan took [Sutton] under his wing,” McGraw explained. “His dad was a rich guy, and he wanted Hal to be around Hogan… he thought just rubbing shoulders with Hogan would be good for him.”

So, it’s only right that Sutton used Hogan’s company irons throughout his professional career. Sutton didn’t use any old stock model irons, though.

“Hal wanted his irons ground,” McGraw explained. “The toe of the irons were too rounded for him, so we would square it up… he wanted thin toplines, thinned soles. He didn’t want chrome and nickel-plating on them because he thought the carbon-steel forged irons felt softer with no plating.”

McGraw said he remembers telling Sutton that his line of thinking on no plating was “bull-,” but that’s what Sutton wanted. So, throughout his career, Sutton played custom versions of whatever Hogan company irons were out at the time.

A custom build was typical for Tour players who used BHGEC irons, though. According to McGraw, Hogan wanted to grind his company’s clubs exactly how Tour players wanted them, so when the player wasn’t playing well, he could “look in the mirror.” That way, as Hogan said, “it damn sure won’t be our fault.”

Flash forward to 2000, and Sutton had a custom version of Hogan Apex 1999 blade models in the bag.

According to McGraw, the stock versions of those irons had been in the works for years prior to their public release. McGraw and Tom Kite worked tirelessly on the designs with McGraw watching and listening, and Kite providing feedback on the range.

“I got in my car so many times to drive to Austin C.C., and we watched Kite hit those irons a million times,” McGraw said.

“When do you think these irons will be ready?” McGraw asked Kite.

“When the CGs (center of gravities) on the 2-iron through the wedge are in the sweet spot,” Kite answered.

Finally, Kite and McGraw found the right design for each iron, and Sutton started using a custom version of those irons in 1999. Sutton’s irons were equipped with True Temper Dynamic Gold X100 shafts and cord grips; McGraw says Sutton used cord grips because that’s what his mentor Ben Hogan used. His irons also measured between D2 and D3 swing weight, according to McGraw.

As Sutton’s photos on Twitter reveal, he had “H.S.” stamped into the back cavity. As McGraw explained, the custom stamping of initials began out of necessity, rather than aesthetics.

“Later on, we had some of the 99’s still left, and [Sutton] used them all up,” McGraw said. “He went thru all of our last heads, him and Mark Brooks.”

So, if you’re looking for a set of fresh Hogan Apex 1999 irons and can’t find them, you have Sutton and Mark Brooks to blame!

How It Works: Whoop is so much more than a round-the-clock performance monitor

Considering a DIY gear project? Grips are a great place to start