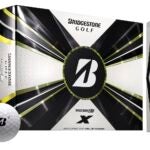 The Tour B's ReactivIQ cover benefits shots off the tee and around the green.

Professional golfers usually get their way when it comes to equipment. When Tiger Woods and Bryson DeChambeau asked Bridgestone to bring a new Reactiv cover formula to market in 2020 with its Tour B, it wasn’t a matter of if the equipment manufacturer could make it happen, but how quickly it could ramp up production for two of the biggest names in the sport — along with the retail golfer.

“Bryson and Tiger kind of pushed us to bring it to market,” said Elliott Mellow, Bridgestone’s marketing manager. “I wouldn’t say it was necessarily premature, but with areas still to improve upon. What I mean by that is the 2020 ball has a urethane material plus the multiple impact modifiers. It’s kind of a blanket formula across all four models.”

Adding “impact modifiers” to the urethane allows the cover to react differently depending on the force imparted at impact. For example, a driver swing speed allows the cover to recover quickly, which in turn generates more ball speed and distance. However, when a softer touch is delivered — think a deft wedge shot — the cover stays on the face longer, taking on more of the grooves to produce additional greenside spin.

Instead of continuing on with the same Reactiv, Bridgestone used the additional runway to create a new Reactiv iQ cover formula for the 2022 Tour B Model (X, XS, RX and RXS). The impact modifier recipe has been maximized for each ball in the lineup, with the help of DeChambeau and Woods, which means golfers will receive all the performance benefits for each specific model.

“The reason I am with Bridgestone is we share the drive to always innovate and look for ways to improve,” said DeChambeau. “In fact, I really like being part of their R&D team. Over the last couple years, we have optimized the recipe of impact modifiers in the cover to develop the new REACTIV iQ material. Its constant innovation that is allowing me to increase ball speed off the tee while also increasing control and consistency.”

Bridgstone’s Tour B line continues to feature four models — Tour B X, Tour B XS, Tour B RX and Tour B RXS. The three-piece Tour B X and XS are geared for swing speeds over 105 mph with the X producing less spin and a lower flight off the tee than XS. Both balls produce ample greenside spin with the help of Reactiv iQ.

For golfers under 105 mph swing speed, the three-piece Tour B RX and Tour B RXS are ideal options. The balls have similar performance benefits to the X and XS through an optimized cover formula that places a premium on distance off the tee with reliable short game spin. The RXS generates a higher launch and spin rate than its RX counterpart.

The new cover formula has been well received on Tour since it was introduced at the end of last year. DeChambeau (Tour B X), Woods (Tour B XS) and Matt Kuchar (Tour B X) have already put the ball in play, and Fred Couples and Lexi Thompson are expected to convert as well in the coming weeks.

“When you combine 900 polymers engineers and layer in feedback from Tiger and Bryson, it’s a recipe for innovation,” said Mellow. “These guys are hands on with R&D which really helps push our designs to the next level. Our R&D focus the last few years has been the study of contact science, optimizing the moment of impact for the needs of each shot. With Reactiv iQ, we have made great lengths to do just that.”