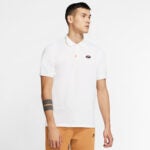 The Nike Polo — a street inspired style with a unisex fit — has become a staple on tour and a hot item for golfers everywhere. It made major headlines in 2019 when Tiger stepped out rocking a version with a ‘Frank’ patch and Rory wore one with a Nike shoe box adorned on the chest. Expect to see more of that at the upcoming U.S. Open Championship.

Nike is releasing a ‘Tiger Slam’ version of the Nike Polo to honor Tiger’s achievement of winning four consecutive major championships. Tiger and Nike collaborated to design the retro-looking logo for the shirt. It’s meant to represent the balance and unity of opposing forces — like the focus and passion we’ve seen from Tiger throughout the years.

The yin-yang-inspired design also represents his eastern and western backgrounds, the mental and physical aspects of golf and Tiger’s love for opposing competition. Of course, it’s red and black, just like Tiger’s signature Sunday look.

The limited-edition polo will officially be up for grabs on Nike.com on September 15th, but you’ll have to sign up to be a Nike member first. In the meantime, shop other colors of the Nike Polo below.

This iconic style combines Dri-Fit technology with street style, making this a great polo for on or off the course.
buy now
Pro shop