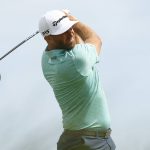 Instead of simply signing a couple of pitchmen who could help push product, the 43-year-old targeted a “technical” player and a “feel” player who could help provide valuable feedback during the shaft creation process — and maybe even shape the direction of the company.

Six months after LA Golf entered the shaft space in 2018, it announced a partnership with U.S. Open champion Bryson DeChambeau, who quickly filled Dickens’ “technical” role and helped get the company’s multi-material putter shaft off the ground.

“If the engineering design was like a songwriting credit in the music industry, [Bryson would] have a full credit on the [putter shaft] design,” Dickens told GOLF.com. “He was incredibly involved in the design structure and had some ideas that weren’t on our radar. I still remember our head engineer had to go home and get out one of his old college textbooks to look up some of the terms he’d used. He challenged our thinking on design structure.”

With DeChambeau in the fold, Dickens set his sights on tracking down the “feel” player. What he didn’t realize is it’d take two-and-a-half years to land the guy he wanted: Dustin Johnson.

Johnson and LA Golf announced a formal partnership last week at the U.S. Open, almost three years after Dickens sat down with the two-time major winner, his brother (and caddie) Austin and agent David Winkle at Pebble Beach to figure out a way for the two sides to join forces.

“I still remember Dustin saying he was in, but only if the shaft made him better performance-wise and felt better — meaning more comfortable — in his hands,” said Dickens. “I had no idea how long that journey was going to be, but it ended up being incredibly valuable.”

Over the last six months, LA Golf created six different prototypes for Johnson before it landed on an iteration of the Tour Axs Blu with lower torque and trajectory that convinced him it was time to make the switch official at the PGA Championship.

“With Dustin, it’s all about the visuals and the feel, and most golfers fall into that bucket,” Dickens said. “He said it’s the first time he’s been able to swing as hard as he can and know his misses will go almost as far as his good drives.

“All the manufacturers have had their shot with Dustin over the last 15 years. He tests everything. But he’s chosen to use the same shaft for years and years. He really is set in his ways and very superstitious. He has such a higher bar. He had no desire to change until he was more comfortable. The fact that he put it in play for the first time at a major was very validating.”

Along with providing feedback on future LA Golf products, Johnson will take on another role as a major shareholder, sitting on the company’s Board of Directors alongside DeChambeau.

This isn’t the first time Dickens has put an athlete in a position of power. On the way to turning Marucci into the most-used bat in Major League Baseball, Dickens placed former major leaguer Jose Bautista on the Board and watched him flourish in his new role.

“[Jose] was involved in every aspect of the business,” Dickens recalled. “One of the biggest fights we ever got in was over the shipping and receiving company we used. He’d be texting me from the dugout nitpicking everything from the gross margins of our accessories to our fulfillment. That’s incredibly valuable. We have plenty of private equity and bankers involved, but we love having the player perspective.”

Dickens doesn’t expect DeChambeau and Johnson to pour over the balance sheets, but he does plan to glean whatever insights they’re willing to provide on products and the industry as LA Golf continues to grow. It’s a blueprint that’s served Marucci well over the years. The baseball bat manufacturer has a similar advisory board — the board includes Bautista, Albert Pujols, Chase Utley, David Ortiz and Buster Posey — who test and approve products during the creation process.

Dickens is also hoping LA Golf’s ascent somehow mirrors the overnight success Marucci enjoyed in baseball, where it went from new kid on the block to the most played bat in MLB in 5 years.

“There are far more similarities [between baseball bats and golf shafts] than differences,” he said. “The shaft is a component part, but the grip doesn’t change ball performance. And the head has been regulated for years. The one place you’re going to keep seeing any real, meaningful change is with the shaft.

“We’re going to try and disrupt the shaft space, which is really where the ball performance comes from. In terms of LA Golf as a brand, we’re trying to figure out how to translate brand momentum and feedback directly into the aftermarket where we’re doing direct-to-consumer sales with all our shafts.”

In the past three years, LA Golf has gone from a relative unknown to a rising name on Tour, with the brand’s TPZ graphite putter shaft leading the way. According to Dickens, LA Golf has seen seven major winners use the putter shaft in the last 60 days, and the requests to test continue to grow — to the point that a waiting list now exists on Tour.

“I think this putter shaft is going to take over the market,” he said. “It’s the most talked-about product on Tour. No one else was really thinking about the putter shaft. At the U.S. Open, I had guys coming up to me wanting to learn more about it. The interest is definitely there.”

Having DeChambeau and Johnson front and center using the shaft certainly doesn’t hurt. Just don’t expect LA Golf to expand its stable of staffers anytime soon. Similar to the way Marucci targeted marquee players in television markets early on, LA Golf is focused on quality over quantity as it continues to grow.

“We’re not fixated on winning shaft counts,” he said. “If we get half of the best players using our product, the rest will fall into place.”