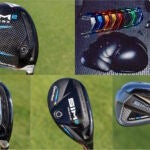 It was a banner year for TaylorMade’s SIM products in 2020. Both Dustin Johnson and Collin Morikawa won majors – The Masters and the PGA Championship, respectively – using SIM drivers and fairways. Also, and rather unexpectedly, a throng of pro golfers began using hybrids for the first time in years thanks to TaylorMade’s SIM Max Rescues.

The original SIM drivers proved successful on Tour, and in our 2020 ClubTest, due to TaylorMade’s commitment to speed; aerodynamic shapes, Speed-Injected resin, and fast materials. While the new 2021 versions include many of the same speed-inducing technologies, TaylorMade has made weighty changes with its follow-up SIM2 line.

Most notably, the company has honed in on improving forgiveness throughout the SIM2 family to enhance overall performance for golfers.

“Forgiveness equals confidence,” said Tomo Bystedt, Senior Director of Product Creation for Metalwoods at TaylorMade, in a press release. “In 2020, we built a driver that was aerodynamic, promoted favorable launch properties and had one of the hottest faces in golf. By increasing forgiveness with SIM2, SIM2 Max and SIM2 Max D, we’ve truly engineered a driver with no tradeoffs.”

Additionally, TaylorMade has made its SIM2 fairways higher launching to help on shots hit from the turf, and the company used direct feedback from tour players to craft its all-new SIM2 Rescue club.

Below, we discuss everything you need to know about TaylorMade’s new SIM2 drivers, fairways, rescues and irons, plus the new MySIM2 custom personalization platform. The new SIM2 clubs will be available for preorder on January 19 and hit retail on February 19.

Now, let’s dive into the tech!

There are a few major changes you’ll notice when comparing the SIM2 drivers against the successful SIM drivers of yesteryear.

Firstly, and most colorfully, there’s a new aluminum “Forged Ring Construction” that makes up the rear portion of the heads. This ring allowed TaylorMade to adjoin the crowns and soles in a way that drives weight further back in the heads for increased forgiveness.

Secondly, the sole plates of the SIM2 drivers are now made entirely of six-layer, high-strength carbon to go along with carbon crowns. This construction helped TaylorMade save weight in places it didn’t want in order to stack more weight in the back. The full-carbon soles were possible in the SIM2 head, specifically, thanks to TaylorMade removing the weight-adjustable track of the previous SIM model.

The only part of the SIM2 heads that are made from Titanium, according to TaylorMade, are the CNC milled face cups that have varying thickness to help on shots hit off-center.

As you’ll notice, TaylorMade kept some of the same popular technologies from previous years: TwistFace to reduce negative effects of heel and toe shots, and an Inertia Generator – by way of the wing-like protrusion in the sole – to increase speed and aerodynamics. Also, TaylorMade is still injecting resin into the faces to get speed consistently closer to the USGA limit, but the Speed Injection Port is now located in the toe section, rather than having two ports on the face. For overall speed across the face, Speed Pockets remain in the soles, too.

Three models make up the SIM2 driver line: SIM2, with a 16-gram back tungsten weight, SIM2 Max, with a 24-gram back tungsten weight for more forgiveness, and SIM2 Max D, which has a heel-ward construction for draw-bias. The TPS Front Weights (those small circles in the soles near the faces) are located optimally to produce the differing desired effects of each head model.

But wait, who wants different colors?

As part of its new MySIM2 personalization program, TaylorMade is allowing for color changes in five different areas on the SIM2 and SIM2 Max heads:

Check out the video below for our head-to-head ClubTest between the SIM2 and SIM2 Max drivers vs. the original SIM and SIM Max.

Continuing to utilize its popular V-Steel sole construction for playability from the turf, TaylorMade has lowered weight in its SIM2 fairway wood heads to drive weight lower. For golfers, lower weight in these heads allows for easier launch, which is especially helpful on shots hit off the ground.

As with the drivers, the SIM2 fairways are offered in three different head models: SIM2 Titanium, SIM2 Max and SIM2 Max D.

The Sim2 Titanium head, at 170cc, is the most compact and tour-inspired design. It’s made with an 80-gram sole weight for low center of gravity (CG), and it has a ZATECH Titanium Face for fast ball speeds. The SIM2 Max (190cc) and SIM2 Max D (195cc) have faces made from C300 steel, and are constructed for greater forgiveness and launch. The SIM2 Max D, of course, has a draw-bias designed into its head.

Like the SIM2 drivers, the SIM2 fairways have black carbon crowns with contrasting chalk toplines to frame the golf ball for alignment.

As previously discussed, TaylorMade’s SIM Max Rescue clubs took pro golf by storm in 2020. Rory McIlroy was an early adopter, and Johnson won the 2020 Travelers Championship with two rescues in the bag after playing hybrid-less throughout his career.

This year, the all-new SIM2 Rescue was designed with direct insights from McIlroy and Johnson. Thanks to feedback from the game’s top players, the SIM2 Rescue is designed for an iron-like ball flight and workability, according to TaylorMade. There’s also a new leading edge, sole geometry, internal weighting, and a blacked-out look.

The SIM2 Max Rescue, on other hand, uses a different sole geometry that includes TaylorMade’s V Steel technology to offer golfers more forgiveness, and has a white chalk topline.

After charting thousands of shots from players of wide-ranging skills, TaylorMade says its engineers sought to expand the sweet spot of its irons. To put it simply, golfers tend to miss the center of the face and TaylorMade wanted to help them out.

So, for its new SIM2 Max and SIM2 Max OS irons, TaylorMade developed what its calling a “Cap Back Design,” which features strong and lightweight polymer materials that stretch the length of the back cavity. The point is to add rigidity to the upper portion of the face, which improves the flexibility of the Thru-Speed Pocket lower in the face. For golfers, that means more speed and distance on shots across the faces.

The danger with high-tech irons is that feel and sound sometimes get sacrificed for performance benefits. That’s why TaylorMade’s new SIM2 irons have a back cavity insert, called an “ECHO Damping System,” to produce a softer feel and sound.

Compared to the SIM2 Max irons, the SIM2 Max OS (oversized) has lower weighting, wider soles, stronger lofts and more draw-bias. Both irons, though, have thin faces, fluted hosels, 360-degree undercuts behind the faces, and “Progressive ICT” that helps shift the sweet spot toward the toe in its long irons.