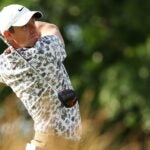 McIlroy is carrying a TaylorMade Stealth 3-wood this week at the U.S. Open.

But the setup only tells half of the story.

Those who keep close tabs on McIlroy’s gear might have noticed a different 3-wood in the bag for the weekend at St. George’s Golf and Country Club.

In a rare mid-tournament switch, McIlroy chose to shelve SIM Ti for a Stealth during the third round, believing TaylorMade’s latest 3-wood offered a better combination of spin and workability for the course setup.

“There weren’t many opportunities for SIM last week,” McIlroy told GOLF.com. “If I need something that goes 310, the SIM is a good option off the tee. But if I don’t have that number, I’m usually laying further back and taking a 5-wood or a long iron. Last week was one of those weeks where I noticed there really wasn’t much of a need for SIM, which is pretty much a 2-wood for me, so I put in Stealth. I didn’t hit [Stealth] much anyway, but I thought it was a better fit over the weekend.”

For McIlroy, the loft on each head is stamped 15 degrees, but there’s a slight difference in the actual number — and role — the club plays.

With an actual loft of 13 degrees, the SIM Ti carries over 300 yards for McIlroy with a spin rate that hovers around 2,700 RPMs, making it, as the four-time major winner called it, a glorified “2-wood” with very little movement. The Stealth, on the other hand, is moderately weaker at 13.75 degrees and carries up to 290 yards with a touch more spin — 3,100 RPMs on the draw, and 3,600 RPMs on the fade — and provides the ability to work the ball both ways.

While McIlroy is using Stealth this week at The Country Club, both models (Stealth and Stealth Plus) have featured in his bag this season. McIlroy initially put Stealth Plus in play at the Players Championship but felt SIM Ti was still the better fit for his setup, so he reverted to the older model in the run-up to the Masters.

Further testing prior to the Wells Fargo Championship between Stealth, Stealth Plus and SIM Ti revealed Stealth was the better fit due to its higher spin rate and workability. But with some courses still requiring a longer second option off the tee, McIlroy chose to keep SIM Ti in the rotation.

What’s most interesting about McIlroy’s two-pronged approach is the fact he’s almost never rotated 3-woods — or fairway woods, for that matter — during his career. For years, McIlroy believed fairway woods were the toughest clubs in the bag to find a suitable replacement, so he kept the changes to a minimum.

“For me, fairway woods need to be versatile,” McIlroy told me years ago. “You need to be able to hit it high, low, both directions. When you find something that checks those boxes, you stick with it. Those clubs have always been very personal.”

With two viable options to handle a particular course setup, he no longer needs to lean on a single model every week. Instead, he can make a game-time decision and feel comfortable that he can swap Stealth and SIM Ti in and out, if he so chooses.

For this week, it’s Stealth and more spin.

While McIlroy’s 3-wood has received an uptick in attention following the win in Canada, he revealed there are only a few spots on the course where the club could see action. Instead, he’s expecting to rely more heavily on a Stealth Plus driver (9 degrees) and 5-wood (19 degrees) to keep it in the short grass and avoid the penal rough.

So far, the gear plan is working for McIlroy, who sits just one shot back of the lead heading into the weekend.

“I could see a few spots where 3-wood might come out,” McIlroy told GOLF.com. “But this is a course where driver and 5-wood, for me, fit spots where I’m trying to carry it.”