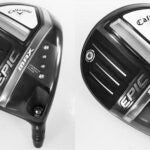 Callaway is coming in hot in 2021. On Monday, the company announced a major shakeup to the equipment industry with its signing of World No. 2-ranked Jon Rahm. Now, we also got our first look at what could be Callaway’s new lineup of drivers for this year.

If the new USGA Conforming Clubs list entries are any indication, then Callaway is returning to the “Epic” namesake that’s been popular in the company’s recent past. After its line of Mavrik drivers debuted in 2020 for Callaway, the company appears to have a slew of drivers under the Epic Max and Epic Speed nomenclatures for 2021.

Based on the USGA listings, Callaway has the following drivers approved for competition: Epic Max, Epic Max LS, Epic Speed (Version 1), Epic Speed (Version 2), Epic Speed LS and Epic Speed DS. Judging by Callaway’s history with driver releases, it’s no surprise the company would have a number of options for different players within the new lineup. Remember though, these are only drivers approved for competition through the USGA, and not necessarily all models (if any) would be available to the public. With the 2021 Sentry Tournament of Champions being played this week, the timing is perfect for PGA Tour players to begin testing and using the products.

With that in mind, there are a number of assumptions we can make based on the black-and-white USGA images. As you’ll see in the images below, the Epic Max and Epic Max LS models have sliding weight ports to adjust center of gravity (CG) within the heads. The Epic Speed models, on other hand, appear to have fixed weight systems on their soles.

Looking more closely, it also seems that Callaway is doubling down on its popular Jailbreak system from past iterations. While previous drivers such as the Mavrik and Epic Flash displayed two Jailbreak ports in their soles near the face, the new Epic Max, Epic Max LS and Epic Speed (Version 1) drivers show what would presumably be four Jailbreak ports. This could mean that Callaway has installed four vertical bars behind the face to boost stability rather than just two, but that’s all speculation at this point.

With “AI Speed Frame” written on the soles of all the drivers, it’s also likely that Callaway is continuing with its Artificial Intelligence-designed structures to maximize efficiency for golfers. Additionally, it appears each of the new drivers has an adjustable hosel for lie and face angle adjustments.

We will keep you updated as more information about the drivers gets revealed, but for now, enjoy the images of Callaway’s new Epic Max and Epic Speed drivers below. Left-handed versions of the drivers were also listed on the USGA website.

Want to overhaul your own bag for 2021? Visit the expert fitters at our sister company, True Spec Golf. For more on the latest gear news and information, check out our latest Fully Equipped episode in the Spotify embed below!