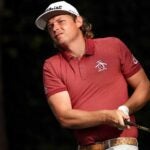 Cameron Smith became the first player to ever card four rounds in the 60s at the Masters.

The Masters has been contested 84 times since the tournament’s inception in 1934. During that period, only 8 winners have ended the tournament with an aggregate score of 15-under or better.

In pretty much any other year, Cameron Smith’s 15-under would’ve been good enough to slip on a green jacket. Of course, 2020 has been anything but normal.

The Aussie finished runner-up to Dustin Johnson — who broke the Masters tournament scoring record at 20 under — at Augusta National but still managed to make his mark on the tournament as the first player to ever card four rounds in the 60s (67-68-69-69).

With the dust having settled on his impressive Masters achievement, the PGA Tour winner sat down with GOLF.com to discuss the Titleist equipment in his bag. Below are three gear takeaways from the chat.

No, Cam doesn’t carry three lob wedges in the bag during competition days, but he does have different options at his disposal based on the turf conditions. It’s not uncommon for tour players to have wedges with different grinds, but Smith may be one of the few toting around three different 60-degree heads.

“[Titleist Vokey Tour rep Aaron Dill] and I actually sat down probably about a year ago now and we decided to put three lob wedges in, rather than getting to a tournament and having to switch them out.”

Smith typically plays a 60-degree Vokey SM8 T-Grind, but due to the softer conditions at Augusta National, he switched things up and went to an S-Grind with slightly more bounce. He also has a K-Grind Vokey when he requires a lob wedge with a moderately wider sole.

“Most of the time I use the same wedge,” he said, “but when the turf conditions are definitely different, it’s nice to have options.”

He still geeks out over product releases

Cameron Smith isn’t your average tour pro when it comes to gear releases. Whereas most of his colleagues treat the release of a new club as just another day at the office, Smith admitted he still gets giddy when Titleist launches a new driver or iron. (If that seems hard to believe, check out the video of Smith receiving the first set of Titleist T100 Black irons.)

“It’s like a kid at Christmas,” Smith said. “Especially how the Titleist guys set it up for you with all the different shafts and heads, glue guns. It’s really cool.”

Judging by Smith’s excitement for new clubs, one would assume he’s a total gearhead. But according to the 27-year-old, he actually doesn’t enjoy tinkering with his setup during the course of a season.

“I’m a really big believer in making the game easier on myself,” he said. “I feel as though the guys at Titleist do a really good job improving the stuff every couple of years. I just put it straight in and believe in them that it’s better than what I was playing.”

Tiger Woods has changed putters on occasion during his career, but his go-to has always been a Scotty Cameron Newport 2 GSS. For Jordan Spieth, it’s a Scotty Cameron 009. Brandt Snedeker leans on a trusty Odyssey White Hot XG Rossie, while Brad Faxon employs an aging FaxDay.

The relationship between player and putter is basically a marriage. There are ups and down, but through it all, they stick it out because they’re better together than apart.

Smith made the decision to add Scotty Cameron’s TFB 1.5 Teryllium to the bag at the 2019 Presidents Cup. The timing of the change wound up coinciding with the first PGA Tour title of Smith’s career at the 2020 Sony Open. Smith hasn’t changed putters since the win, but if you’re expecting the wand to be on a long leash, you’re sorely mistaken.

Smith rarely plays favorites with his gear, including the putter.

“I’ve always been a fan of switching up my putters,” Smith said. “I don’t get in a love-hate relationship with my putter. We’re teammates or workmates. After a certain amount of time, I just put it in the cupboard and venture off to a new one.”