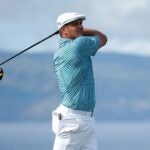 Bryson DeChambeau’s plan to begin using a 48-inch driver — the maximum allowable length under current USGA rules — could already be in peril.

The USGA and R&A released its long-awaited update to the Distance Insights Report on Tuesday, announcing a host of proposed changes to roll back the professional game’s rapid distance proliferation will now enter a review period. Among the biggest of those changes?

“Reduction in the performance of drivers: club length and clubhead dimensions (including volume).”

A change to equipment length, according to the governing bodies’ report, would largely encompass reducing the maximum length of all non-putter equipment to 46 inches. A series of other changes are listed as potential fixes, including modifying both club and ball testing standards. The idea of bifurcation, or professional players and amateurs using different equipment held to different testing standards, is also discussed as an option.

It is clear, though, that club length is first priority. In the report, the governing bodies mention the debate dates back at least as far as 2014, while a proposal to roll back club length was submitted to manufacturers in 2016. However, any proposed changes were tabled until a detailed investigation could be conducted as part of the Distance Insights Report, which was released early last year.

The original report found the trend toward distance was detrimental to the professional game, and asserted that changes would need to be made to protect the integrity of the sport.

“Continuing increases in overall hitting distances will not make golf a better game as a whole,” the original distance report read. “For example, while it is remarkable that long-drive competitors can hit a ball as much as 400+ yards, golf would not be a better sport if anything close to that became a norm for play or if course lengths increased to match it.”

What does it mean for Bryson?

Of course, such changes would come as significant news to Bryson DeChambeau. The big-swinging U.S. Open Champion has significantly altered his body, swing and equipment in order to maximize his swing speed and, by extension, his distance. Recently, he’s flirted with using a 48-inch driver in competition, telling GOLF.com he’s “confident we’ll see it sometime in 2021.”

But the USGA and R&A appear to be moving quickly to introduce changes that could limit club length back down to 46 inches. Compared to the six-month window for manufacturer comments on proposed changes to testing standards, the governing bodies left a significantly reduced timeline for manufacturers to respond to the proposed length change. Tuesday’s report calls for manufacturer comments on club length to be submitted within 30 days, or by March 4. Such a timeline could leave open the potential for changes enacted in the 2021 season, possibly in time for the major championships.

Still, it’s unclear that changing equipment length would prove effective in curbing DeChambeau’s distance gains. Bryson’s current gamer driver is 45.75 inches, a quarter-inch under the USGA’s new proposed limit. He only first began testing a 48-inch driver after winning the U.S. Open in September and never used it in tournament play, meaning the entirety of his mammoth distance gains in 2020 came with a driver that would remain legal under newly revised club length rules.

Tuesday’s report from golf’s governing bodies shows the sport is beginning to catch up to Bryson DeChambeau. As for whether it can slow him down? Well, that’s a question for another day.