Ranking the 7 biggest equipment stories of the year 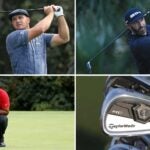 From 48-inch drivers and Tiger gear changes to pros searching for gear on eBay and 2-woods, 2020 produced a bevvy of intriguing equipment storylines.

With 2020 coming to a close, it’s time to look back at the 7 most interesting equipment stories from the year. Even in the midst of a global pandemic, Tiger, Bryson, DJ and company made some head-turning changes that dominated headlines. Expect some of these changes to continue into the new year.

Phil Mickelson reunited with the Callaway XHot 3Deep fairway wood he used to win the 2013 Open Championship during the 2020 Travelers Championship. It was one of several intriguing equipment changes (no surprise there) made by the five-time major winner this year.

What made 3Deep stand out is the fact that Mickelson wasn’t the only high-profile name to add a custom fairway wood to the bag.

Bryson DeChambeau opted for a deep-faced fairway wood of his own for when he needed to throttle back and hit it 300 yards with low spin. With a beefy E2 swing weight, the “fairway finder” was specifically designed to be used off the tee when Cobra created the club more than four years ago.

It never made its way to retail, but it did find its way into DeChambeau’s bag setup during the season. (The club was a precursor to the 11.5-degree Cobra SpeedZone “3-wood” he used during his U.S. Open triumph.)

The deep-faced fairway wood had become almost non-existent in the pro ranks before Mickelson and DeChambeau returned it to a place of prominence. Like several other custom clubs featured on this list, don’t expect it to enjoy a resurgence.

In a move few saw coming, Justin Rose and Honma agreed to part ways just over a year into a multi-year agreement that took top billing during the 2019 equipment signing window.

Alarm bells first started ringing when Rose was spotted at the Arnold Palmer Invitational without a single Honma club in his bag. Rose nor Honma publicly addressed the matter at the time, leaving many to speculate on the status and future of the relationship. With a global pandemic putting golf on hold shortly thereafter, the two sides didn’t formally announce the split until the end of May. Rose won in just his second start using Honma products at the 2019 Farmers Insurance Open, but he dropped from the top spot in the Official World Golf Ranking to No. 14 in a little over a year. Since the split, Rose has remained an equipment free agent, outside of a putter-only deal with Axis1 Golf.

If you had a mint set of TaylorMade TP MC 2011 irons for sale on eBay earlier this year, there’s a chance Daniel Berger scooped them up. The 9-year-old irons have been Berger’s model of choice going all the way back to high school. They also happen to be the clubs that helped him win two of his three PGA Tour titles, including the 2020 Charles Schwab Challenge.

When Berger decided to go the free agent route, it was natural to see him return the MC’s to the bag. They have a lot of history.

“Back when I was using these irons, I had about three backup sets” Berger told GOLF.com. “I would just take out an iron when they got old and throw a new one in. I was just rummaging through my garage and I found a brand new set that was still in the box with the plastic on them. So I went with those.”

Due to the age of the irons, Berger started frequenting eBay (and GOLF’s Fully Equipped Instagram page) to locate backup sets, just in case his current sticks bit the dust.

“I’m going to go on eBay and order as many sets as I can and ride ‘em out until I can’t find anymore,” Berger said.

You do whatever it takes when it comes to clubs that cash checks on the course.

It was an interesting year for Tiger Woods and his famed Scotty Cameron Newport 2 GSS putter. It started with a “new” version at the PGA Championship that wound up being slightly longer than Woods’ usual gamer to allow him to practice longer and save the back.

The experiment didn’t last long before Woods returned to his trusty putter. All seemed to be right in the world until Woods changed another piece of his equipment DNA. In place of the usual Ping PP58 grip — known as the handle he used for 14 major titles — at the U.S. Open was a full-cord Lamkin pistol grip featuring the company’s “Deep-Etched” pattern.

Woods never commented on the reason for the change, but it was interesting that he chose to use a grip that’s identical to the one employed by Steve Stricker — better known as Woods’ sounding board on putting. Maybe Sticker let him borrow one from his grip stash? We’ll likely never know.

3. Iron covers in the winner’s circle

Iron covers made the cut this year, thanks to Aaron Rai’s win at the Scottish Open. Yes, iron covers — a rarely seen accessory in the pro ranks. If you’re unfamiliar with the covers, some golfers prefer to use them to keep their sticks from picking up unwanted dents and dings.

Forged from a soft 1025 carbon steel, Rai’s Tiger Woods-designed TaylorMade P7TW are prone to picking up “bag chatter” when the heads bang against each other. Some golfers don’t have a problem with the worn look. Others want to keep the heads pristine.

What’s interesting about Rai’s cover usage is this isn’t something that started with the special Tiger irons. When Rai won for the first time on the European Tour in 2018, his Tour Preferred MB irons were hidden by a set of red and black TaylorMade covers that had seen better days. Based on photos from the Scottish Open, Rai has since moved on to a black and white cover set.

Another question that needs answering: Why did he (or most likely his caddie) cross out the “L” and “P” and write a 7 and 8 in Sharpie? Did the 7- and 8-iron covers go missing? Like Tiger’s new putter grip, these are burning gear questions that deserve a proper answer.

2. Return of the hybrid (and high-lofted fairways)

Hybrids made a comeback in a big way, thanks in large part to Dustin Johnson and Rory McIlroy, who used the clubs at various points during the 2020 season for the first time in their careers. A hybrid’s ability to combat the left miss suddenly made it a viable option for high swing speed players who typically struggled with the long-iron replacement. Johnson even went so far as to use two hybrids after the restart, at the RBC Heritage, believing 19- and 22-degree TaylorMade SIM hybrids gave him the best chance to find the fairway and attack flags with his approach shots.

Johnson also slipped on a green jacket with a 7-wood in the bag — a club rarely seen in the pro landscape. A favorite for mid- to high-handicappers who struggle to get the ball airborne and need a spin bump, the club burst onto the scene in a big way at the PGA Championship, where Ping, TaylorMade and a number of other equipment manufacturers saw their meager supply of 7- and 9-woods disappear in a matter of days.

With lush rough greeting players at Harding Park, some players felt the high-lofted fairway wood provided better turf interaction and versatility from a variety of lies.

Those who weren’t quite comfortable with the idea of throwing a 9-wood in the bag opted for a 7-wood. In total, Ping, specifically, saw eight players opt for a 7-wood. Johnson chose to use a TaylorMade SIM Max 7-wood for the week and kept it in play from that point forward.

While the 9-wood never made an appearance after the PGA Championship, the 7-wood has become a popular option for longer hitters who struggled to find a suitable gapping option between the 3-wood and first long iron in their bag.

Of all the storylines on the list, this one has the opportunity to hang around for the foreseeable future. Before Bryson DeChambeau revealed he was testing 48-inch drivers in advance of the 2020 Masters, the club was nothing more than a novelty in the professional ranks. Long drivers swore by the 48-inch driver, but most pros found the club to be unwieldy and not worth carrying (or testing).

Following DeChambeau’s revelation, several players warmed to the idea of going longer in an attempt to keep up. Phil Mickelson added a 47.5-inch Callaway Mavrik Sub Zero driver ahead of the Masters, believing it gave him an edge on five holes at Augusta National. Dylan Frittelli found a 46-inch Callaway Mavrik Sub Zero to be a game-changer off the tee. Adam Scott went to a 46-inch Titleist TSi4 and led the Houston Open field in driving distance. And Callum Shinkwin did his best Lefty impression in Dubai, employing two Callaway drivers (including a 48-inch Mavrik Sub Zero) at the DP World Tour Championship.

“Now guys that are hitting it in the 180s, ball speeds are getting pushed to go to the 190s because of Bryson and a lot of guys have to [go longer] to keep up,” Mickelson said in October.

What’s interesting about the race to get longer is DeChambeau — the impetus behind players embracing longer drivers — never even put one in play at the Masters.

The reigning U.S. Open champ continues to test longer drivers behind the scenes with the goal of getting one in play next year. If he makes good on his promise and finds a way to get even longer with a 48-inch driver, it’s very possible others could follow suit and make the club a common sight in ’21.

Interested in an iron fitting? Head over to GOLF.com’s sister company True Spec Golf for information on how to get fit.