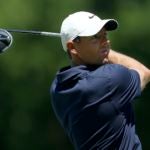 The PGA Tour’s return to the course saw a few players make some last-minute adjustments prior to the first round, including Rory McIlroy. While working his way through the bag (launch monitor in tow) to ensure every club yardage was dialed-in, McIlroy noticed his spin rate was slightly lower than what he was accustomed to seeing with a 10.5-degree TaylorMade SIM driver. (The two-degree loft sleeve is turned down two clicks, which makes it play like an 8.5-degree driver.)

TaylorMade Tour reps Adrian Rietveld and Keith Sbarbaro had two SIM drivers (9 and 10.5 degrees) built up for McIlroy to test, along with a wildcard: a 9-degree SIM Max that had the standard loft sleeve turned down one click to give it a similar loft (8.5 degrees) to his SIM gamer.

“He feels like he’s in a really good place swing-wise,” Rietveld told GOLF.com. “When you’re in that place, that’s the best time to test equipment. That’s the best place to dial it in and find your base level.”

With a center of gravity location that’s positioned toward the back of the head, McIlroy picked up ball speed and 200-300 RPMs of spin with the SIM Max during testing, bringing him to around 2,200-2,300 RPMs with the driver with a launch angle of 13 degrees. Ideal launch and spin characteristics for arguably the best driver of the golf ball on the planet.

“It’s a different driver head, but we didn’t change any other variables outside of that,” said Rietveld. “Rory drives it so well that it just took an incremental change to get there.”

Ever since Sergio Garcia and Callaway parted ways at the end of 2019, the former Masters champion has played a mixed bag consisting of TaylorMade and Ping during his time as an equipment free agent. Coming out of the 13-week hiatus, however, Garcia’s setup had a few more Ping clubs, including a G410 LST driver and PLD putter.

Garcia remains untethered when it comes to his gear, but he’s clearly taken a liking to Ping’s equipment. His 3-wood and 5-wood (TaylorMade SIM) are the only non-Ping clubs currently in the bag.

Justin Rose helped elevate Axis1’s profile when he signed a putter-only deal at the beginning of the year. Now other players are benefitting from the same technology that led the former U.S. Open champion to make a change. While Rose was finishing T3 at the Charles Schwab Challenge — he ranked 6th in Strokes Gained: Putting with his Axis1 Rose mallet — Luke List helped Axis1 notch its first win of the season at the Korn Ferry Challenge at TPC Sawgrass.

Using the same putter (35.5 inches) Rose helped design, List picked up his first title since the 2012 South Georgia Classic. One week is a small sample size, but Axis1 appears to be gaining momentum on the professional circuit.

Everyone was talking about Bryson DeChambeau’s new physique at Colonial, but there was something else that changed while he was stuck at home adding 20 pounds to his frame. The older model Cobra King Ltd Black driver we last saw DeChambeau with at the Players Championship was replaced by a 5.5-degree King SpeedZone (LA Golf Prototype 60X shaft) that helps him maintain a playable spin rate as he goes after the ball with reckless abandon.

“I’m producing so much spin I have to change the clubs [themselves],” he said. “It’s crazy.”

And speaking of changes to the clubs, DeChambeau made a less noticeable change to his King SpeedZone driver, replacing the red 14-gram weight in the sole with a second 2-gram weight, reducing the head weight of his driver from 196 grams to around 185 grams. Speed can be gained in many different ways; using a lighter driver is one way to get there.

Pre-tournament communication between Titleist Tour reps and staffers was conducted via phone, text and video to cut down on the amount of building and tweaks that needed to be made on-site at Colonial, but there are certain adjustments and checks that players prefer to have made the week of the event.

Justin Thomas dropped off his clubs early in the week to have fresh grips added and ensure lofts and lies were at his preferred specs. He also had new 15-degree TS fairway wood built. Jordan Spieth had work done to his gear as well, weakening the loft on his Titleist U500 4-iron by one degree to fit the yardage gaps in his bag.

With new guidelines in place for Tour reps, Spieth’s 4-iron — along with Thomas’ clubs — had to be delivered to a designated drop off area where player or caddie could swing by and pick them up to avoid contact and promote safe social distancing.