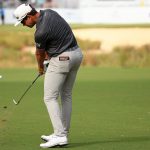 Basking in the glow of his first PGA Tour title at Congaree, Garrick Higgo was asked what he was most proud of following a chaotic back nine that saw the South African grab a share of the lead (and win) while he signed his scorecard.

“I’m just proud of the way I hung in there,” he said. “It was tough all the way from the start. Definitely didn’t have my A game in terms of off the tee, but I like that sometimes. I like not having to play perfect golf. I enjoy scrambling and making a couple putts, which I did, which was awesome.”

Higgo’s success on approach shots and around the green can be attributed to a ball change he made back in March at the Qatar Masters. The switch from Titleist’s Pro V1 to the Pro V1x just happened to coincide with a stretch of golf that included two wins on the European Tour in less than a month.

What Higgo found in the V1x was a level of shot-stopping spin around the green that led to a higher percentage of makable putts during each round.

“I did some testing at home and found the Pro V1x consistently stopped about three feet shorter than the Pro V1 for me. So the Pro V1 was rolling out an extra three feet, and that’s exactly what I was seeing on the course. It was good but still released. Now I’m hitting shots around the green and having shorter putts, which obviously makes a big difference.”

While the greenside spin ultimately led Higgo to change balls mid-season, a lack of significant changes in other aspects of his game sealed the switch.

“There was a slight uptick in long game spin, but I was willing to do it for better feel and more spin around the green,” he said. “And driver spin was exactly the same from the Pro V1.”

Dustin Johnson’s run with a TaylorMade TP Bandon 1 putter (and multi-material LAGP shaft) came to an end at the Palmetto Championship, where the two-time major winner returned to his trusty TaylorMade Spider Itsy Bitsy and a stepped steel shaft.

Johnson finished T28 in SG: Putting with the old wand en route to a T10 finish in his home state.

What the two share in common is a putter that’s trending upward on Tour — Axis1 Golf’s Rose mallet.