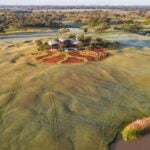 Built as a wealthy rancher’s private playground, “The Saint Andrews of Texas” is one of the world’s most exclusive courses with only six hundred or so people having ever played it. The layout looks flat and harmless, but architect Mike Nuzzo’s brilliant cloverleaf design makes thewind a constant challenge and brings Keller Creek into play on eight holes. You won’t find ball washers, tee markers or yardages at Wolf Point, but there are camels and a private airstrip. Tom Doak says the special dwarf Bermuda greens are the best in Texas. (Photo: Courtesy Wolf Point GC) (*Tied for 87th with Lawsonia)