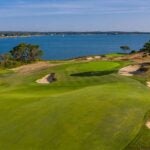 Herbert Fowler will always be associated with his beloved first design, Walton Heath outside of London. In that instance, he had to lend the open heath its golfing qualities as the site featured modest topography. What he was presented with here on Cape Cod was the exact opposite: a glacial moraine with tumbling landforms that converge in the most random manners. What a challenge to route but his figure-8 routing with the clubhouse in the middle seized on the opportunity to perfection. For original holes, few courses can compete. (Photo: Larry Lambrecht)