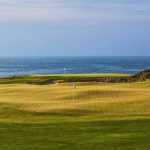 Developers Ben Cowan-Dewar and Mike Keiser handed over a rolling plot of coastal Nova Scotia terrain to Canadian architect Rod Whitman. The result is Canada’s first authentic links. Firm, rumpled, fescue fairways, coastal breezes and endless views of the Gulf of St. Lawrence make it abundantly clear why Nova Scotia is the Latin name for “New Scotland.” Whitman’s talent for adding micro-contours in and around the greens (such as those that promote running approach shots into the 13th and 16th) is unsurpassed but are overlooked here because the long views are so spectacular. (Photo: Brian Oar)