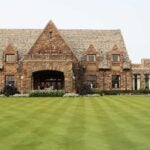 Winged Foot has two 18-hole courses, both of which are ranked on GOLF's Top 100 Courses in the World list.

The U.S. Open is being played on Winged Foot’s West Course. But what about the East Course, the club’s other championship layout? How does it stack up to its more famous sibling? In what ways is it stronger or weaker than the West Course? (Both courses are on GOLF’s Top 100 Courses in the World ranking, the West at 23rd and the East at 62nd.)

Steve Lapper (panelist since 2009; has played 84 of the World Top 100): The East Course should never be considered the West’s weaker sibling. While the latter has slightly more defined fairway angles that force a premium on tee-shot placement, the East’s greens are a tad more undulating, challenging, fun and better defined by the natural slopes of the land. The East seduces rather than brutalizes the average golfer. The West gets more obligatory guest requests, yet the members usually slightly prefer playing the East. No other club, other than Royal Melbourne, has a better pair of courses on this planet.

Michael Pelliccione (panelist since 2020; has played 60 of the World Top 100): Just like its sibling over on the West Course, the East was designed by A.W. Tillinghast. The East is perhaps a bit more attractive, fun and even has more variety than the West, which can be a slog if the game isn’t right. But don’t let that fool you — the East is no pushover. Some would argue that the raised green complexes on East can be more challenging. It’s hard to top the beauty and brilliance of Winged Foot Golf Club and how fortunate the membership is to have one of the greatest 36-hole clubs in the world.

Jeff Lewis (long-time panelist; has played 97 of World Top 100): I adore the East Course. The West mostly sits on a tabletop plateau, whereas the East traverses some property with more movement. The East has a similar personality to Quaker Ridge across the street. Challenging, to be sure, but in a way that one is ready to play again as we walk off — not sure I have ever felt that way coming off the West. If I were a member, I would imagine that the brilliant West (which has the best set of parkland par-3s ever built) would only get three of every 10 rounds played for me.