2 things that make a golf course great, according to Coore and Crenshaw 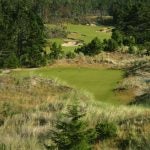 Bandon Trails is one of many Bill Coore and Ben Crenshaw designs.

There are a number of different things that strike a chord for golfers when they say they like a certain course. Sometimes it’s the condition or the quality of the practice facilities, or they might just like the menu at the 19th hole. As they say, beauty is in the eye of the beholder.

But when it comes to what courses are the best, the rankings are far less arbitrary. Take GOLF’s Top 100 Courses list for example. Each course on the list is meticulously ranked based on certain criteria in order to inform the public on what courses are the greatest. You can read more on that methodology here.

Panelists view courses through a particular lens that differs from those of the general public. And that rings true for how the people designing the courses — the architects — as well. With these differences in mind, GOLF.com sought out the opinion of two of the great architects of the modern era, Bill Coore and Ben Crenshaw, about what makes a golf course great. Here’s what they had to say.

When it comes to what Crenshaw looks for in a great golf course, he made no hesitations, saying that placement of bunkers was near the top of the list. The bunkering of a course can give players a sense of the signature of the architect who built the course.

“That stamp of individuality comes from the look of the bunkers,” Crenshaw said. “No one is ever going to think of Winged Foot without thinking of its bunkers. … The bunkers are just beautiful there. It’s part of a personality of a place.”

Does it look natural?

According to the duo, the courses they enjoy the most aren’t artificial. They look like they were carved from the original piece of land and have remnants of the time prior to the course sprouting up there.

“The most interesting courses are the ones that looked like they were discovered on that property,” Coore said. “[They don’t look like] they were brought there or manufactured there. They look like the property. They have the inherent character of the property.”