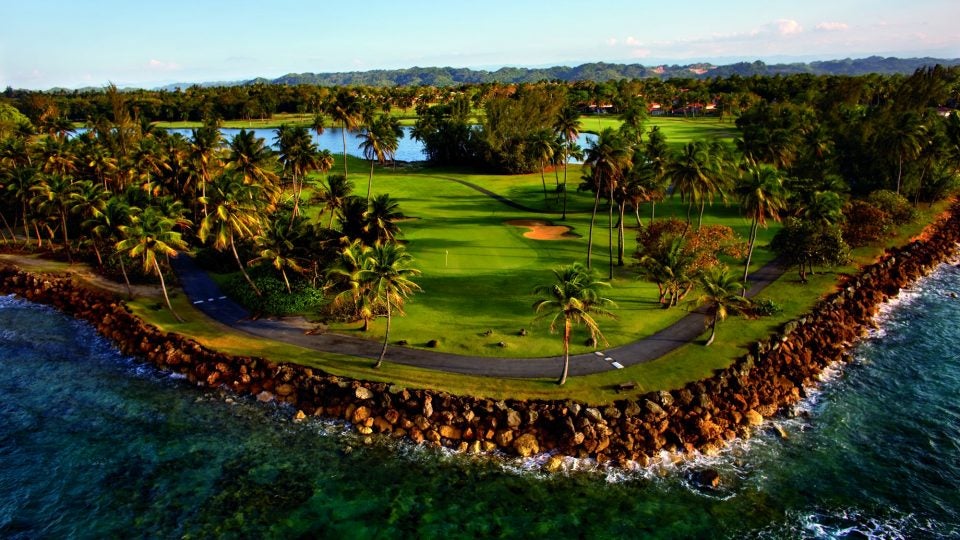 The Dorado Beach Resort & Beach Club, the first Ritz Carlton Preserve property in the Americas, has two courses: the Dorado Beach East Golf Course or the Dorado Beach Sugarcane Golf Course. A third, the Plantation Course, is closed for restoration. Robert Trent Jones Sr. designed both the East and Sugarcane courses. Years later, his son added his imprimatur to East Course. The resort also sought out Ray Floyd to update the Sugarcane Course.

Dorado Beach Golf Resort is part of the Tournament Players Club (TPC), a network of PGA Tour-approved championship layouts. It also enjoys the distinction of being a AAA Five Diamond hotel, one of just six in the Caribbean and 121 in the world. In 2017, it was the only Caribbean resort to receive the Forbes Five-Star Hotel and Spa Award.

The golden sands on Puerto Rico’s northern coast inspired the name of the town of Dorado in 1842.

In 1905, Alfred T. Livingston visited the area at the behest of a consortium of real estate investors. No deal emerged, but Livingston purchased 1,700 acres for himself. He moved his family there, and he grew grapefruit and coconuts for export.

His family’s love affair with the land would continue for decades. Daughter Clara so loved to fly that she built an airstrip where she also gave lessons. In 1937, her friend and fellow pilot Amelia Earhart visited. Earhart reportedly declined an invitation to stay at the governor’s mansion so she could stay with Clara.

In 1955, Clara Livingston sold the property to Laurance S. Rockefeller. The grandson of John D. Rockefeller developed a resort and a nature sanctuary on the site. Over the years, the resort hosted presidents, celebrities and other luminaries.

The developers enlisted Robert Trent Jones Sr. to design a nine-hole East and nine-hole West courses, which opened in 1958. By 1966, each had become an 18-hole layout. Jones’s vision included the addition of a lagoon, fruit trees and a tropical forest.

In the 1960s, Chi Chi Rodriguez became the head pro at Dorado Beach. During a 1964 episode of Shell’s Wonderful World of Golf, viewers watched him defeat Doug Sanders on the East Course at Dorado Beach. In 1992, Rodriguez was inducted into the World Golf Hall of Fame.

In 2011, Jones’s son, Robert Trent Jones Jr., completed a major renovation of the historic East Course. He lengthened the layout by 700 yards and replanted the greens with ultra-dwarf Champions Bermuda. They are now some of the fastest greens on the island. He also saw to it that local beach sand would fill the bunkers. His extensive work sparked a rebirth of Dorado Beach East. Gorgeous ocean views greet you on many holes, including 1, 9 and 18. Many holes play into prevailing trade winds.

Jack Nicklaus lauded the design of the par-5 4th (Ausubo/Balata), the famous double dogleg “Z” hole. Zigzag your way around two ponds on your way to a green guarded by large bunkers. Beware of the false front on the right side of the green. The mesmerizing ocean backdrop will soothe you should that four-footer lip out.

Daunting par-5 14th is called El Corozo, or Corozo Palm. Hit it long and straight into the prevailing winds. Navigate around a fairway bunker to the left, while avoiding out of bounds to the right. Greenside bunkers discourage attempts to go for it in two. A little wedge into the elevated green is a safer bet.

The ocean lines the right side of the home hole, called Almendro, or Almond. Savor the scenery as you conclude your round on this long par 4. On the green, take a moment to grab a photo against the sparkling ocean backdrop. 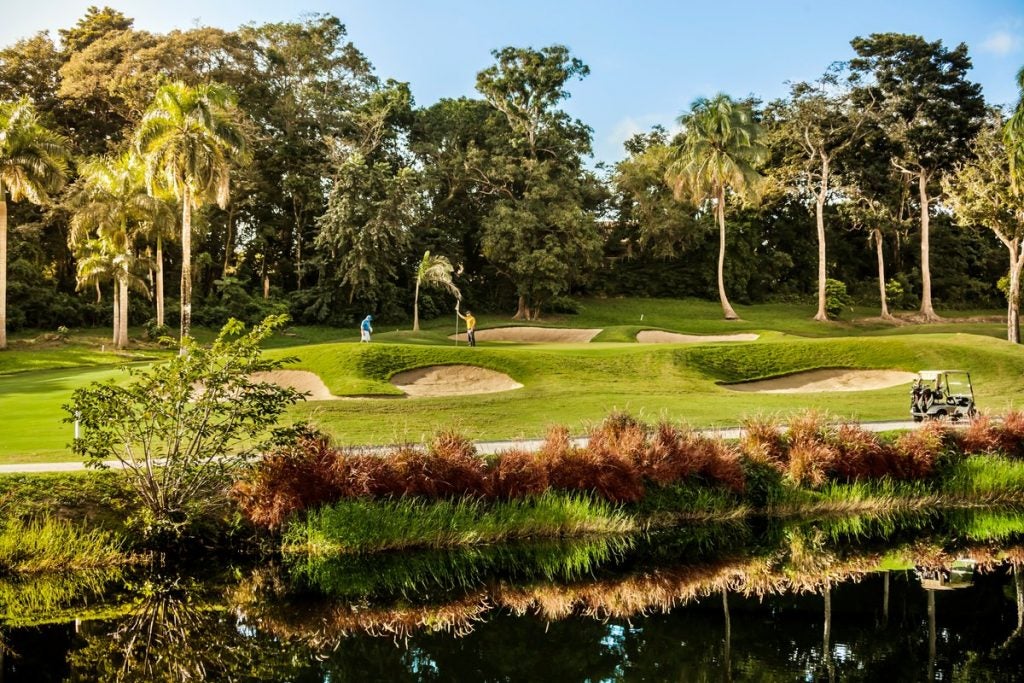 TPC Dorado Beach: Sugarcane Course is a par-72 design that stretches to 7,119 yards from the back tees. You’ll savor an inspiring mountain backdrop on many holes. The benefits of wide fairways and large greens are offset by deeper bunkers and longer forced carries. Play aggressively on the more forgiving front nine. On the back nine, water often awaits errant shots.

The par-3 4th demands accuracy and distance control. Bunkers guard the narrow, two-tier green front and back. From the back tee, you’ll face a forced carry of 200 yards. A well-hit iron into an undulating, well-guarded green is a must. Check out the resort’s hole-by-hole descriptions here.

The Dorado Beach golf pro shop is part of a 50,000-square-foot, $5 million clubhouse. Gather with your playing partners to reminisce about the round on the terrace. Dine at the Panela or Zafra restaurants. The latter delivers a gourmet dining experience offering creative Caribbean cuisine.

You can play at the Dorado Beach Golf Club in various ways. Pay regular greens fees, select a package or opt for a private club membership.

Popular tee times fill up well in advance, so it’s often best to plan ahead or to enjoy Dorado Beach golf as part of a package.

Even the most passionate golfers find that other activities vie for attention in Dorado Beach. Spa Botanico is one of the premier spas in the Caribbean, a Forbes five-star-rated escape. The $12 million Watermill Aquatic Park offers a wave machine, lazy river and multiple water slides. There’s also a state-of-the-art fitness center. 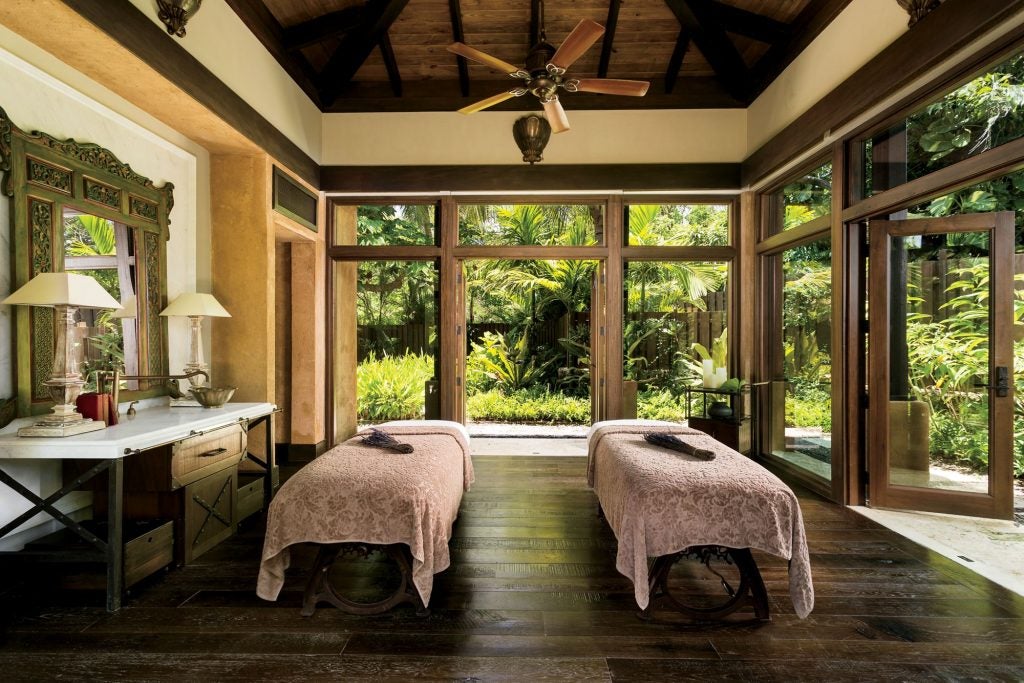 The resort’s bay is ideal for windsurfing. Sailing, surfing, paddle-boarding are also options. The club has tennis, basketball and volleyball courts. Hikers and bikers can traverse the 11-mile paved Rockefeller Trail.

Catano’s iconic Bacardi Distillery is only a 30-minute drive away. The 250+-store Plaza las Americas, the Caribbean’s largest shopping center, is a half-hour away.

San Juan, Puerto Rico’s capital, is 20 miles away. Enjoy a side trip to Old San Juan. The historic forts there are known as “Guardians of the Caribbean.” The National Park Service notes that they are the oldest European-style battlements in the United States. Some walls and structures date to the 16th century. La Fortaleza and the San Juan National Historic Site is a UNESCO World Heritage Site.

Lodging befits the resort’s five-star status. The rooms and suites are more like villas. The 114 oceanfront rooms and suites range in size from 941 to 2,782 sqft. Many come with infinity plunge pools. Every room and suite was renovated beginning in late 2017. Light, bright colors perfectly complement the beach views and warm ocean breezes. Dedicated Embajadores provide concierge services.

There are also 29 Ritz Carlton Reserve beachfront residences. They are within easy walking distance of the hotel proper. Each house includes use of a six-seat golf cart. It is even possible to arrange for a private chef to prepare a meal.

Su Casa, Clara Livingston’s recently renovated 8,000-square-foot home, is also available. The historic five-bedroom hacienda accommodates up to 12 guests. If you are planning a major celebration, note that it will also seat up to 175 guests for dinner.

Some purchase a primary or secondary residence here. Beachfront homes and golf community residences deliver oceanfront, golf and/or mountain views. Dorado Beach is home to one of the more prominent club neighborhoods anywhere in the Caribbean.

Getting to Dorado Beach is straightforward. Major carriers offer direct flights from numerous U.S. cities to Luis Munoz Marin Airport (SJU). Dorado Beach is conveniently located 26 miles west of the airport – about a 35-minute trip by car, taxi or shuttle.

Another option is Isla Grande Airport (SIG), just southeast of Old San Juan in the Miramar business district. The single-runway airport serves those arriving from various Caribbean locations. The drive from the Isla Grande Airport to Dorado Beach takes about 30 minutes.