The ultimate golfer’s guide to Los Cabos: Where to play, stay and eat

A generation ago, Los Cabos’s twin cities of San Jose del Cabo and Cabo San Lucas were known only for sportfishing, not golf. How times have changed. Connected by a 19-mile corridor at the southern tip of Mexico’s Baja Peninsula, the sun-drenched outposts still boast trophy anglers and their catch (marlin, dorado and yellowfin tuna), but equal billing now goes to the area’s world-class links. With more than a dozen championship courses beckoning, and more on the way, Los Cabos is a big-time golf destination. Toss in a kick-off-your-shoes vibe and unique, desert-meets-the-sea setting, and it’s hard to imagine a better place to flee February’s chill. The Shark, the Golden Bear and DLIII have laid down some thrilling tracks here, courses with lots and lots of water that are definitely more fiesta than siesta.

This track climbed two spots in our 2017-18 Top 100 World Rankings (finishing at No. 36), and a loop around it will tell you why it’s so worthy. Since our 2015 rankings, this Davis Love design (with an assist from brother Mark Love and Paul Cowley) has debuted a new par-3 10th hole, seen the maturity of its 12th and 13th holes (the par-5 12th, in particular, is a seaside stunner) and transformed its old par-5 17th into the finishing hole. What hasn’t changed are the massive dune ridges that bracket many holes and the nearly inescapable views of the Pacific Ocean. Diamante is a private real estate development, but the occasional tee time is available for outsiders, especially for prospective buyers. Try to get your flip-flop in the door. It’s that good. ($320)

Few courses in the world boast a closing stretch as stirring as this 1994 Jack Nicklaus creation. Warm up with holes six and seven, consecutive par 3s that play adjacent to the Sea of Cortez, and buckle up for a big finish. The par-4 16th heads straight to the sea, the par-3 17th rolls out a dramatic forced carry over sandy beach and rugged rock outcroppings, and the par-4 18th clings to the Cortez for your 430-yard journey to the green. ($150–$350) 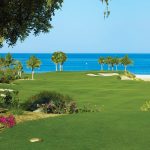 You may also like The ultimate golfer’s guide to Mexico: Best places to play, stay and eat

Looking for a layout where the cart ride alone is worth the price of the green fee? Jack Nicklaus strikes again with this 2014 design, Los Cabos’s most spectacular course. Not every hole is textbook-great, but that’s nitpicking. Instead, revel in the unforgettable thrills of a half dozen one-of-a-kind holes, some draped atop cliffs that peer over the Pacific, others that zigzag between rock-encrusted sand ridges. The highs are everywhere (so if you’re prone to vertigo, tee it up elsewhere). ($227–$370)

Golden Bear meets the Shark at Puerto Los Cabos, the closest great course you can play near the historic town of San Jose del Cabo. Jack Nicklaus crafted the Marina nine and Greg Norman the Mission nine; together they form a remarkable spread amid Sea of Cortez views and Sierra de la Laguna mountain vistas. Norman owns the signature hole, the par-3 sixth, which plunges 100 feet and features 10-mile beach panoramas. A third nine from Nicklaus is on the way. ($180–$285, includes all food and beverages)[gallery:13664509]

Two sublime kick-back spots beckon, one where A-listers romp and the other abutting Baja’s most money course.

John Wayne and Bing Crosby were among the original guests at One&Only Palmilla, the doyen of Cabo luxury hotels, which dates to 1956. Jennifer Aniston, Oprah Winfrey and John Travolta are among the new breed of privacy-seeking celebs that cherish this pricey but outstanding oasis, which sits right on the Sea of Cortez. Of the twenty-seven holes of Jack Nicklaus golf, the Mountain and Arroyo nines form the championship layout, but the Ocean nine yields the best hole: the 458-yard, par-4 third, which sweeps right down to the water. Superb beach access, a hilltop wedding chapel, a sybaritic spa and a new Jean-Georges Vongerichten restaurant add to the enticement. ($615–$5,000+)

One of three sister properties in Los Cabos, this one offers the best, most convenient access to the grass-and-cliffside thrills of Quivira next door. Beachside pools and dining, a relaxed, adults-only ambience, all-inclusive room pricing and melt-into-the-ocean sunsets are among the highlights. ($369–$980)

WHERE TO EAT, DRINK and SIGHTSEE

From the Giggling Marlin to Squid Roe, Cabo San Lucas is legendary for its dining and drinking spots. El Farallon, at the Resort at Pedregal, is a personal favorite, thanks to its locally caught seafood and eye-catching setting above the Pacific.

GOLF contributor Josh Sens co-authored Sammy Hagar’s Cabo Wabo 2015 cookbook, Are We Having Any Fun Yet? Here’s Sens’s take on the Red Rocker’s favorite hang: “What began more than 30 years ago as a humble taco stand and tequila bar has grown into a concert venue and rollicking cantina. Along with bracing margaritas, highlights include Sammy’s tequila shrimp, the shellfish flash-cooked with garlic and chiles and then splashed with lime and tequila. Live music also rocks here year-round, but at no time more than in mid-October, when Sammy celebrates his birthday with a bash that turns the whole town upside down.”

The best mini road trip is within easy reach of Cabo. What awaits after an hour’s drive up the Pacific coast is this charming seaside town ringed by mountains that wows with Old Mexico ambience. Shops and art galleries line cobblestone streets, quaint cafés serve up cervezas, and wild waves make it one of Mexico’s top spots for surfing.

Also known as the Arch of Cabo San Lucas, this distinctive “Land’s End” limestone rock formation juts into water that divides the Pacific and the Gulf of California. It’s an ideal backdrop for sunset cruises, bird and sea lion sightings, and, for several months a year (notably in February), whale watching. It’s not uncommon to see Humpbacks breaching, so be patient with your camera. El Arco is also a popular spot for deep-sea fishing, the activity that put Los Cabos on the map in the first place.