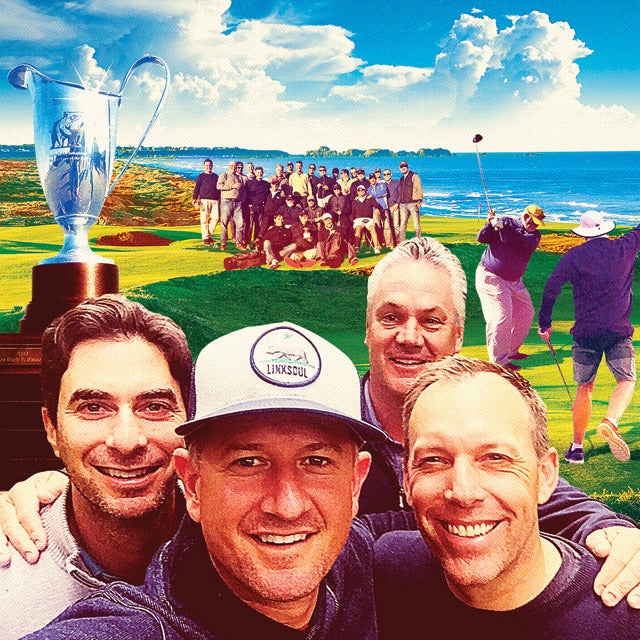 The event’s eponymous patriarch is Tony Kielhofer, a big, garrulous, wonderfully profane 75-year-old who, as a young man in Sacramento, once shot 66 to finish second in the city championship. He passed on his love for the game to his nephew Matt Ginella, one of my closest friends going back to the mid-1990s when he worked as a photo editor at Sports Illustrated.

Matt went on to a stint at another golf publication, where his persnickety editor unsuccessfully tried to ban us from recreational rounds together because we worked at competing titles. He now brings a much-needed vitality to the Golf Channel, where he’s the travel editor and a regular presence on Morning Drive. Matt is a benevolent dictator in running every aspect of the UTI (yes, we welcome urinary-tract jokes), and the eclectic cast of characters is a testament to all of the friends he’s acquired across the golf world. John Ashworth, co-founder of the clothing company that bears his name, is a regular, oozing a surfer-dude cool. The 2015 champs were the self-styled “Dos Presidentes”: Tom Pashley, president of Pinehurst Resort, and Josh Lesnik, the president of Kemper Sports. My partner this year was Steve John, who runs the Crosby Clambake (aka, the AT&T Pebble Beach pro-am). This group was proof of how interconnected the golf world is. Steve played college golf with Ashworth and his partner Rick Rielly, the longtime head pro at Wilshire Country Club.

With such a golfy crew, the gossip was excellent, and the long, boozy dinners were a delight. (Uncle Tony and two other honorary uncles—his brother-in-law Bill Salmina and Lew Thompson, the owner of Forest Dunes in Roscommon, Mich.—were in charge of the wine; they brought 51 bottles, including some legendary 1997 Chateau Mouton Rothshild.)

But as with any good buddies trip, the UTI is defined by high-caliber golf and low humor, all of us leaving behind our families and jobs and reveling in the chance to immerse ourselves in the game and the brotherhood that comes with it. Across three and a half days, we ground through four competitive rounds (better-ball with handicaps), a putting contest at the Punchbowl, a riotous team game at the Preserve played in eightsomes, and an impromptu scramble at Bandon Trails, just because we needed more golf. Looking back, I’m not really sure how I survived the trip, because I don’t usually drink double Transfusions at eight in the morning.

It was the competition that carried us all along. At the start of the UTI, each guy kicks in $350 toward the purse, and cash is handed out every night to the top four finishers in each round, with a big payout going to the overall winners. No paycheck has ever felt quite as satisfying as that stack of crisp greenbacks.

Steve and I had a chance to win the whole shebang coming down the stretch of the final round, and I haven’t felt that much adrenaline since those long ago days of playing high school basketball. In the end, we got clipped by Andrew Fleming, a Kemper Sports lawyer, and his pards Ollie Dunn, a teaching pro at Mountain Gate Country Club in L.A. (They’re still talking junk in ongoing group chats and on various social media platforms.)

For all the great golf shots I witnessed, and all the spectacular holes we played, my enduring memory of this UTI is more personal. In the final round, Steve and I were paired with Ginella and his college roommate Tim Hetrick. They played out of their minds to give themselves a chance at glory, and when Matt rolled in a birdie on the 16th hole at Bandon Trails, he and Tim hopped around the green in a delirious hug.

Slightly overserved, the ecstatic duo wound up falling over and then, still locked in an embrace, rolled across the green and down a hill toward the 17th tee box, all the while pounding each other on the back and yelling unintelligible valentines in each other’s ear. It was one of the zaniest, funniest things I’ve ever seen on a golf course—and the perfect metaphor for how all of us got carried away by our love for the game, and each other.