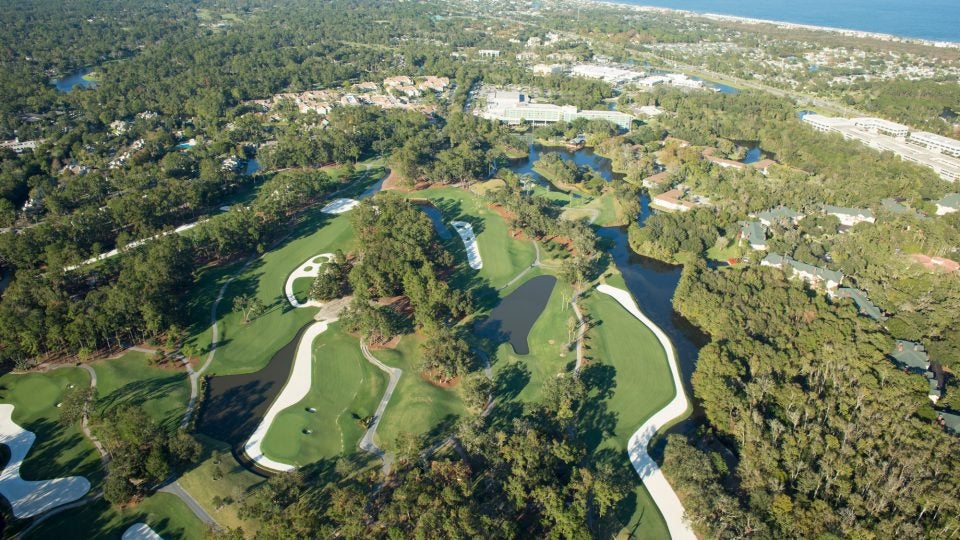 When the Stadium course at TPC Sawgrass made its debut at the 1982 Players Championship, the reactions were swift, brutal and nasty. “This course plays all around my game and never touches it,” Jack Nicklaus said. “I’ve never been very good at stopping a 5-iron on the hood of a car.” Tom Watson was less jovial. “It’s a joke, a real joke,” Watson said. “This course needs some major changes before it can even be called fair.” Joked Fuzzy Zoeller, “Where are the windmills and animals?”

Can a leopard ever change its spots? This one did.

The Marquis de Sod, Pete Dye, changed golf course architecture for all time with this 1980 design of then-PGA Tour Commissioner Deane Beman’s vision. Though it’s been softened since, today it remains a spectacular mix of serpentine waste bunkers, endless water hazards, grassy moguls and hollows and semi-blind shots, with 17 fairways and 18 incredibly varied green complexes. Oh, and one island-green par-3 that could well be the most famous hole in golf. Without question, it matured into one of the elite tracks in all of tournament golf. Yet, 35 years after Jerry Pate christened it with a win and a plunge into the lake, the Players Stadium course at TPC Sawgrass is better than ever. A slate of enhancements following conclusion of the 2016 Players Championship have elevated the TPC Sawgrass to a new level.

At the forefront of the alterations is the redesign of the par-4 12th, the most significant hole renovation since the course opened. Gone is the old, and frankly dull, 358-yard, drive-and-pitch par-4. In is an excitement-inducing, drivable 302-yard test. The old hole was the course’s shortest par-4 and was notable only for the fact that it was different from every other hole. It was certainly within reach for many of the game’s big bashers, but few would ever go for the heavily mounded green because the penalty for missing the green was so severe, no matter where you missed. Over the years, its shot demands became routine: Long iron or fairway wood off the tee, semi-blind approach with a wedge. Nobody was taking any chances—and scores reflected the conservatism. In 2016, the field made par or birdie 83 percent of the time.

Fast forward to 2017. With the new design changes in place, expect to see big-time spikes in eagles and double-bogeys. So much can now happen at the 12th. Gone is the dogleg-left, the severe mounds near the green and the steep drop-offs leading to pot bunkers and worse surrounding the green. In their stead is a mostly straight-ahead hole with a large, rectangular-shaped putting surface that mostly sits down as an extension of the fairway. To the left of the green is a comma-shaped lake. The tilt of the ground near the green is right-to-left, so any drive hit with too much hook spin could find its way into the hazard. The green itself is also sloped right-to-left, so even the drawing shot that finds the green could still face liquid peril, if there’s too much momentum.

Complicating matters is a long waste bunker that has to be carried, some 255 yards off the tee, a pot bunker hugging the green’s right side and additional pot bunkers further right.

So why not just slap it up the right side and let it run onto the green? Ah, because there are now smallish but influential mounds right in front of the green’s right side, which can propel the ball this way or that. There’s also the scenario of a drive flared too far to the right. The resulting recovery pitch is a nightmarish proposition, a precise touch shot over sand and mounds to a green sloping away, toward the water.

Even the layup shot off the tee calls for astute risk/reward judgment. A shot placed up the left side of the fairway offers the most advantageous angle into the green, thanks to the green’s right-to-left slope. Yet, tug it too far left and you’ll find that gigantic bunker—and as defending Players champ Jason Day points out about this spot, “You don’t want to be left with a 60-yard bunker shot.”

Still, lay up safely to the right and you’ll have a less receptive green to hold your second, as well as more hazards to carry. It’s classic Pete Dye, “Pay me now, or pay me later” design philosophy.

If you’ve got to make up ground in a hurry, however, you have a go at the deep, reasonably wide green. The newly created eagle possibilities at the 12th make this stretch of 11-12-13 (a par-5, par-4, par-3) nearly as compelling as the legendary closing trio of 16-17-18.

Elsewhere, the next most noticeable change for players and spectators was the removal of a huge mounded area between the sixth and seventh holes. In its place is a large lake. Not only is the aesthetic appeal enhanced on both holes, but the drama, too, especially on the 451-yard, par-4 7th, where the water will definitely come into play off the tee.

Competitors will also find smoother, more consistent greens, which have been re-turfed in TifEagle Bermudagrass, so anticipate fewer complaints about the putting surfaces this year. In addition, several holes saw rough removed around the fairway landing areas, so that errant spheres might find more vexing pine straw lies, and rough removed around the greens, to promote a better variety of recovery shot options.

Range rats—and that includes every PGA Tour professional—will warm to the changes at the practice facility. Actual greens now dot the driving range field, to instill a reality check with players. One green is bulkheaded at 130 yards, providing a premonition of the island-green 17th to come. White sand bunkers are sprinkled about, and tall palms are have been placed to provide trajectory and aiming perspective. Unique are the series of miniscule greens that are designed to accommodate wedge play. The radius of each of these greens is roughly 5 percent of the shot’s distance—so just five feet for a shot of 100 yards.

Credit the PGA Tour for continually endeavoring to improve their signature facility and signature tournament. Of the changes for 2017, watching the eagles fly—or the double bogies drown—at the new par-4 12th is the one we can’t wait to see.