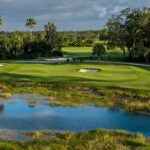 The 9th hole at The Staple Course at PGA National Resort in Palm Beach Gardens, Fla.

As PGA National Resort, home to this week’s Honda Classic, undergoes a $100 million renovation, one of its biggest additions was the new Staple Course. Golf course architect Andy Staples took the old Squire Course, built his new Match Course over where Nos. 2-17 once were, and took the swath of land where the opening and closing holes were to build his nine-hole short course.

The holes range from around 50 to 140 yards, and while The Match Course is based off template holes, The Staple does have some things in common with the Match: there are no tee boxes or designated starting points. There’s short grass everywhere and you can drop your ball anywhere to start the next hole.

I interviewed Staples while the short course was under construction, but I recently got a chance to play the Staple myself. Months ago, he had explained during the build that the fun and intrigue, as with most short courses, would mainly come from funky slopes and undulations in the greens. “It was close to being what I had initially imagined,” Staples said now.

Many golf resorts have added short courses over the last several years. They make for a quicker and less strenuous activity that can be enjoyed several times in a day or in addition to a full round. But just because short courses like The Sand Box at Sand Valley or Pinehurst’s Cradle have been well-received, it doesn’t mean these things are particularly easy to make.

“It’s really simple to keep drawing 95-yard par-3s on a piece of paper, or even when you stake them and start hitting shots,” Staples said. “It’s really hard to make them distinguishable from each other and still not make them completely difficult or wonky.”

Staples walked that line well. The greens are large and intriguing enough in shape to make for a variety of possible shots depending on the pin position. The tight lies and exaggerated undulations in and around the greens made for some difficult short-game shots, but it also made it exceedingly playable for the lesser skilled or beginning golfer. Save for finding yourself in a bunker, you can truly play the course with just a putter. In fact, Staples has. (“I got over the water on the 5th green,” he said. “It takes a little bit of a shot to get up and over, but I did it.”)

Staples also made a point of creating bowls and funnel pin positions to give people a shot at making a hole-in-one. (While playing recently, the group in front of us made one.)

“Everyone thinks that they’re just this white whale type of thing,” said Staples, who rolled a basketball on the sand-covered greens when they were being built to study the undulation. “I don’t think it’s a bad thing to propel and to help people get holes-in-one. That’s just fun.”

The first hole that caught my attention was the 3rd. Staples designed the routing in the shape of a figure eight, in part to force a natural meeting point for drinks and snacks. At the 3rd is the first time this happens. Like almost every Florida track, the Staple is quite flat. However, there’s a small bit of elevation at this teeing ground.

“That was already naturally one of the highest points on that little chunk of ground, so we pushed it up knowing that we’d be able to get it up high, so you’d see down a little bit,” Staples said.

The green is shaped like a massive, narrow boomerang with water directly behind and a semi-grass bunker guarding the bend. You rarely get that feeling of looking down at a par-3 shot around Palm Beach Gardens, so it was a pleasant sensation.

The 5th is the last outward facing hole before turning around. There are some interesting tee-shot choices, like a bunker, for instance, which my group decided upon. The shot plays over water to a green with some tiny ledges for pin positions, but also a massive halfpipe down the middle. The green made for great variety — one day it could have multiple holes-in-one, but on our day we all had tough putts just to keep it on the upper plateau.

The 9th green is Staples’ homage to the 6th at Riviera, with a bunker in the middle of the green. The green undulates up and around the bunker, so it’s possible to get the ball from one quadrant around the bunker, which can make for a fun putting competition before calling it quits.

And if the putt-off continues? Even better.

“I’d love to see eight (golfers) out there, same with The Match Course,” Staples said. “I think people need to start pushing the envelope on this idea of a foursome. Four is the minimum.”

Another unique idea easy to get behind.