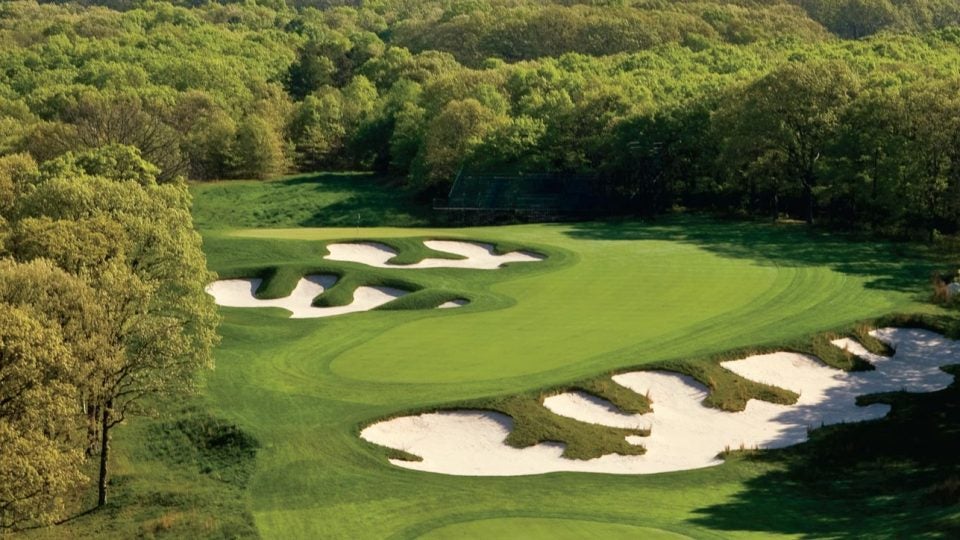 Bethpage giveth and taketh away from many New Yorkers.
Courtesy of USGA

I’m milling around the parking lot at Bethpage, easily an hour before sunup, kicking pebbles to pass the time. This place keeps pulling me back. To get here this morning, I’ve driven almost 40 miles from my apartment in Manhattan—over the Triborough Bridge, past LaGuardia Airport, in between the 18-wheelers on the Long Island Expressway—my only company the insomniacs calling in to sports radio to break down another Mets loss.

My own abbreviated sleep hasn’t bought me much. When I arrived a little while ago and joined the infamous overnight queue, hoping for a tee time on Bethpage’s incomparable Black course, 63 cars were lined up in front of me, making my chances of going off before noon pretty grim.

Out of the shadows of a streetlamp, a guy in baggy shorts and Adidas sandals sidles up to me and leans into my ear. “My brother wants to talk to you, in car numbah four,” he says in a Long Island accent as thick as fog off the Sound.

They either want to roll me, I think, or sell me drugs. But not wanting to make enemies, I follow the guy to their car, near the front of the queue. Rather than get out and greet me, his brother stays seated behind the wheel. I’m told to get in, and, peculiarly, I do.

“We’re only three today—our fourth backed out,” the driver tells me. “If you stick with us, you’ll get a good numbah.” What he means is that if I’m sitting in their car when the state park employee comes around at the stroke of 5:00 a.m. to pass out numbered tickets—one for each person, up to four golfers per car—I’ll receive one of the first numbers. 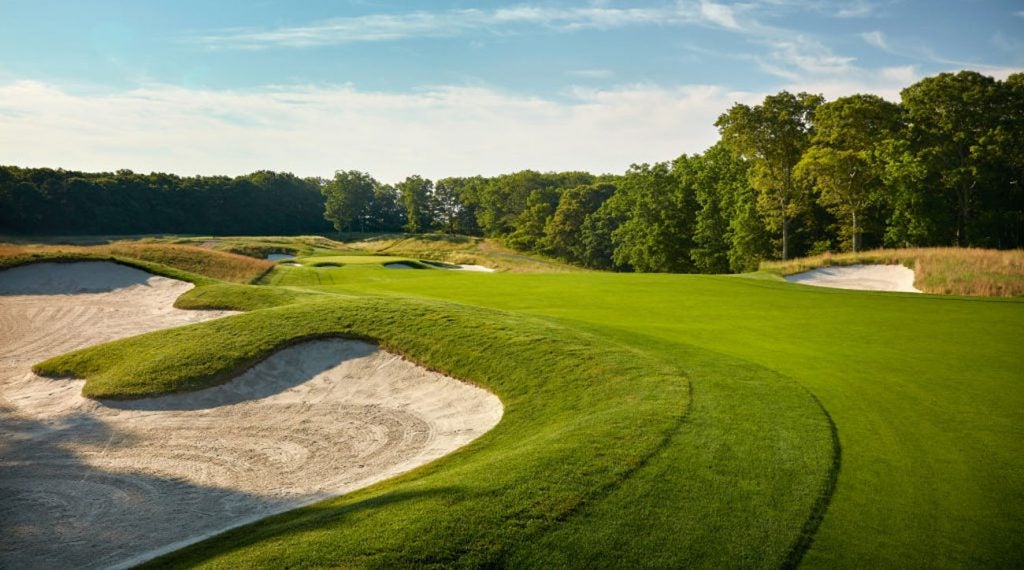 Bethpage has never hosted the PGA Championship before.
Getty Images

Suddenly, the day is looking up. My stories from Bethpage stretch back almost 30 years. I first played the Black course on a cold spring weekend in 1990, in the opening round of the Ivy League Championship. I was a sophomore at Brown. Thirty-six holes on Saturday, 18 on Sunday. Twosomes. Little, if any, talking. Everything in the cup.

The tournament was a war of attrition. Our scores in this championship were so high one year, the following year the coaches decided to move us up from the tips to the middle tees, lest anyone seeing the results think we were Sunday hackers. The change had little effect.

Each of the three years I played in the event, the Brown Bears showed up with resolve. And each year, in our khakis and chocolate V-necks, we finished dead last. As best as I can recall—and, trust me, I try to repress these memories—I broke 90 in all but one of those rounds. But I never threatened 79.

Studded with massive bunkers and long, rugged holes that climb up and down broad hills, the Black course was every bit as monumental when I competed here in the early ’90s as it is today. But the USGA had yet to select it as the first truly public course to host the U.S. Open. (Pebble Beach, with its ocean holes and green fees north of $500, is, technically, public, but egalitarian it’s not; Bethpage Black, landlocked despite being on Long Island, costs $75 on weekends for New York State residents to play.) Rees Jones’s restoration of the Black, a 1936 A. W. Tillinghast design, would prepare the course for the 2002 U.S. Open, but that doctoring was still years away. 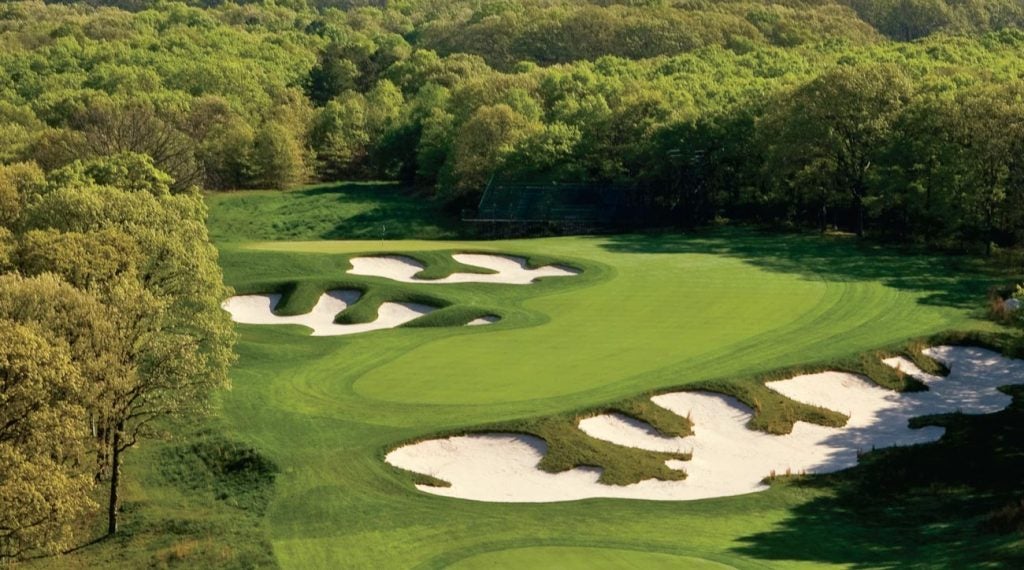 Bethpage giveth and taketh away from many New Yorkers.
Courtesy of USGA

As I discovered all too well in my third clash with the course as a collegian, the pre-makeover Black was wildly unkempt. It had great bones but needed serious grooming. Trees grew out of bunkers. Bushes lined a number of holes. Standing on the elevated, semi-blind tee at the par-4 16th—with, for once, a decent round going—I pushed my drive but figured it would be easy enough to find. After five minutes of combing through ankle-deep rough and thorny brush for the ball, I came up empty.

So I took the loneliest walk in golf, back up the hill, holding up the twosome behind us, all for the pleasure of re-teeing, this time hitting three. I made a triple-bogey and staggered home from there. Decades later, I’m still seeking redemption on the Black. Can I get off to a good start by finding the narrow tongue of fairway, way down the hill, on No. 1? Can I work the ball right to left off the second tee to avoid blowing through the fairway and facing an impossible sidehill lie? Every hole presents a challenge—a tribute to Tillinghast’s design.

Once, when I was playing with one of my brothers and his friends, the bounces finally started going my way. A flared approach on the first kicked off the shoulder of the green and rolled toward the hole. I made the 20-footer for birdie. I birdied the next hole, too, and nearly did the same on the third. I knew I couldn’t keep up this pace, and sure enough the course started exacting revenge. Still, I held things together enough to shoot 78.

As I was killing the whale that day, my brother’s friend collapsed in the enormous bunker fronting the 17th hole. For a while, he couldn’t get out. “Man down!” my brother shouted. “Man down!”

Opened in 1934 and expanded as a Works Progress Administration project, Bethpage State Park is well known as a country club for the masses. It is also a microcosm of New York, a fact I’ve come to appreciate not as a college kid rolling in once a year in the team van, but as a publinxer showing up solo in my thirties and forties, again and again. 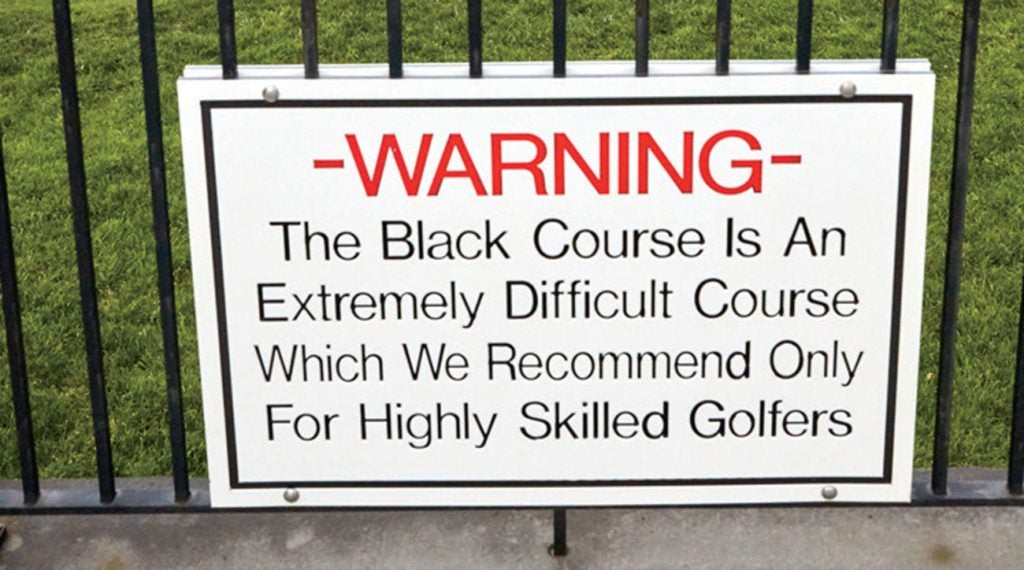 Courtesy of PGA of America

The accents of the people I’m paired with reveal the settlement patterns of suburban Long Island: Irish, Italian, Jewish, African American, Korean. We all fight the crowds to get on the Black course or one of the four other 18s at Bethpage: the Red, Blue, Green and Yellow. We lift our balls out of footprints in unraked bunkers, slog through 4½-hour rounds. We traipse off the course exhausted—and yet also enlarged.

Trying to score a morning time on the Black—assuming you’ve struck out with the online reservation system, as often happens—is like going to the DMV and hoping to get in and out without blowing the day: Show up before the place opens and stand in line.

The workings of the overnight queue at Bethpage are as foreign to a first-timer as NYC’s alternate side parking rules. Instead of going straight into the clubhouse, you need to find the curling line of cars in a far corner of the giant lot. Back your car into the lowest-numbered space available and wait until the “bakery” tickets are handed out. Then go to the clubhouse and wait again until your number gets called.

Those fortunate enough to secure a time on the Black get concert bracelets affixed to their wrists— badges of honor and objects of envy in the clubhouse and on the range. The starter snips them at the window of his gazebo and sees you off.

As E. B. White wrote in his 1948 essay, “Here is New York,” “[T]he city makes up for its hazards and its deficiencies by supplying its citizens with massive doses of a supplementary vitamin—the sense of belonging to something unique, cosmopolitan, mighty and unparalleled.” 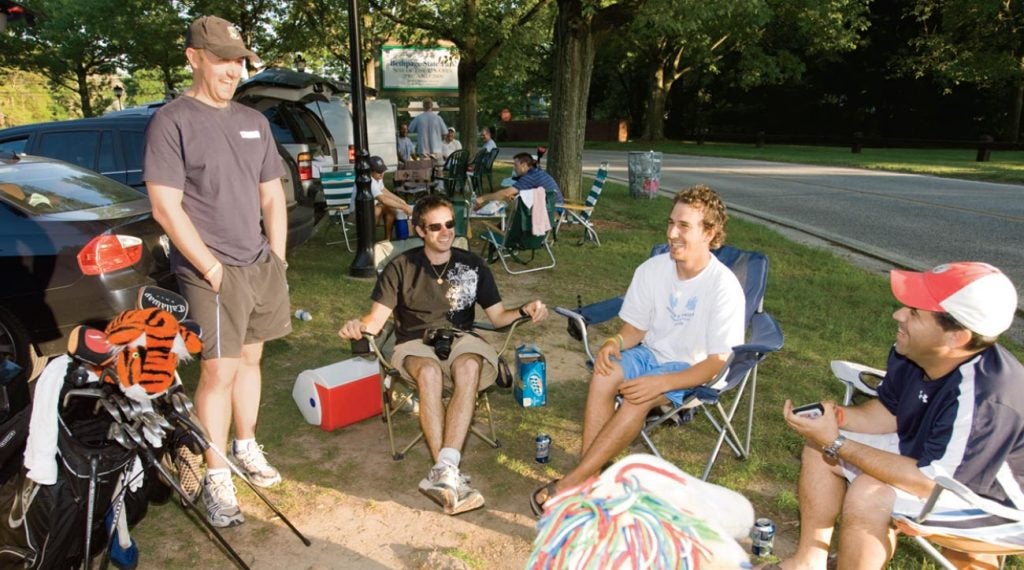 Golfers hanging out at Bethpage, hoping to earn themselves a tee time.
USGA/John Mummert

He could have been describing a day of golf at Bethpage. Playing the par-5 fourth on the Black, for example, feels like inhabiting a landscape painting. First the fairway swings to the right. Then it bends left around a fescue-edged bunker before climbing a short, steep rise and sweeping right again, skirting the far edges of a vast and fingered cross-bunker set diagonally into the slope. The green huddles behind yet another bunker, down and to the left. Sharing the walk with strangers who’ve also driven through the night only enhances the experience.

Just as New York is replete with characters, so is Bethpage. There’s the ex-Marine named Paul, wispy but strong, who in the early morning barks out the numbers (“sixty-seven . . . sixty-eight . . . sixty-nine”) and guards the clubhouse door. And if you find the prices on equipment in the pro shop too steep, keep an eye out in the parking lot for a guy in a visor who sells name-brand gear out of the back of his ’70s sedan.

“Gloves? Balls? Hats?” he murmurs. Nod your head, and, after making sure no parks officials are approaching, he’ll open his trunk to reveal an inventory of StaSof gloves, PING umbrellas and Pro V1s, all of which he sells for a few bucks less than the discount stores.

The day the two brothers and their friend invited me to sit in their car, I assumed we’d play as a group. After our numbers got called, we stood in the walkup line inside the clubhouse for a few minutes before finally reaching the counter. I hung back a little and let them choose the tee time. But rather than take the first available foursome on the Black, they nabbed an earlier opening for three.

Alone again, in the company of Bethpage. 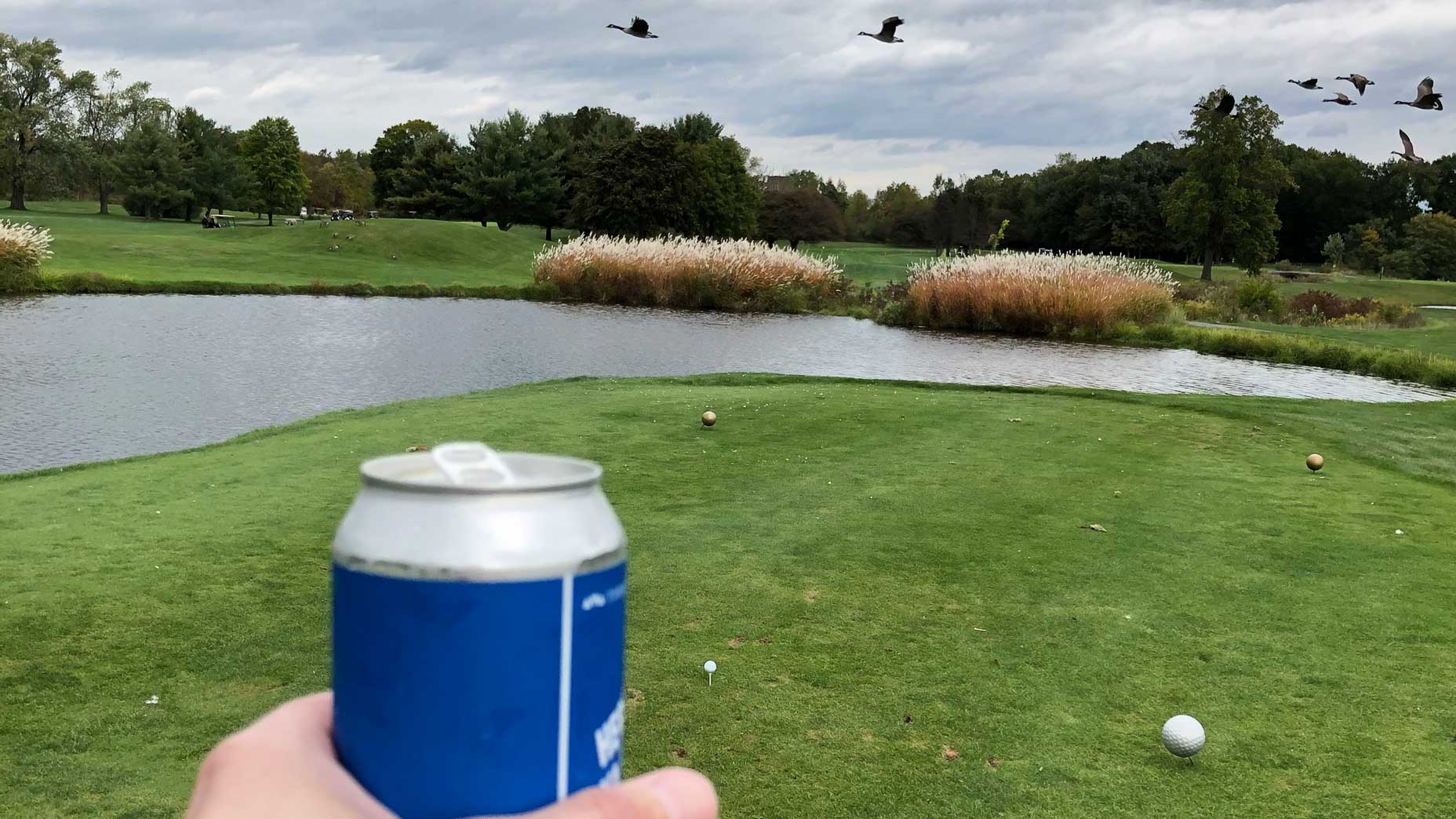 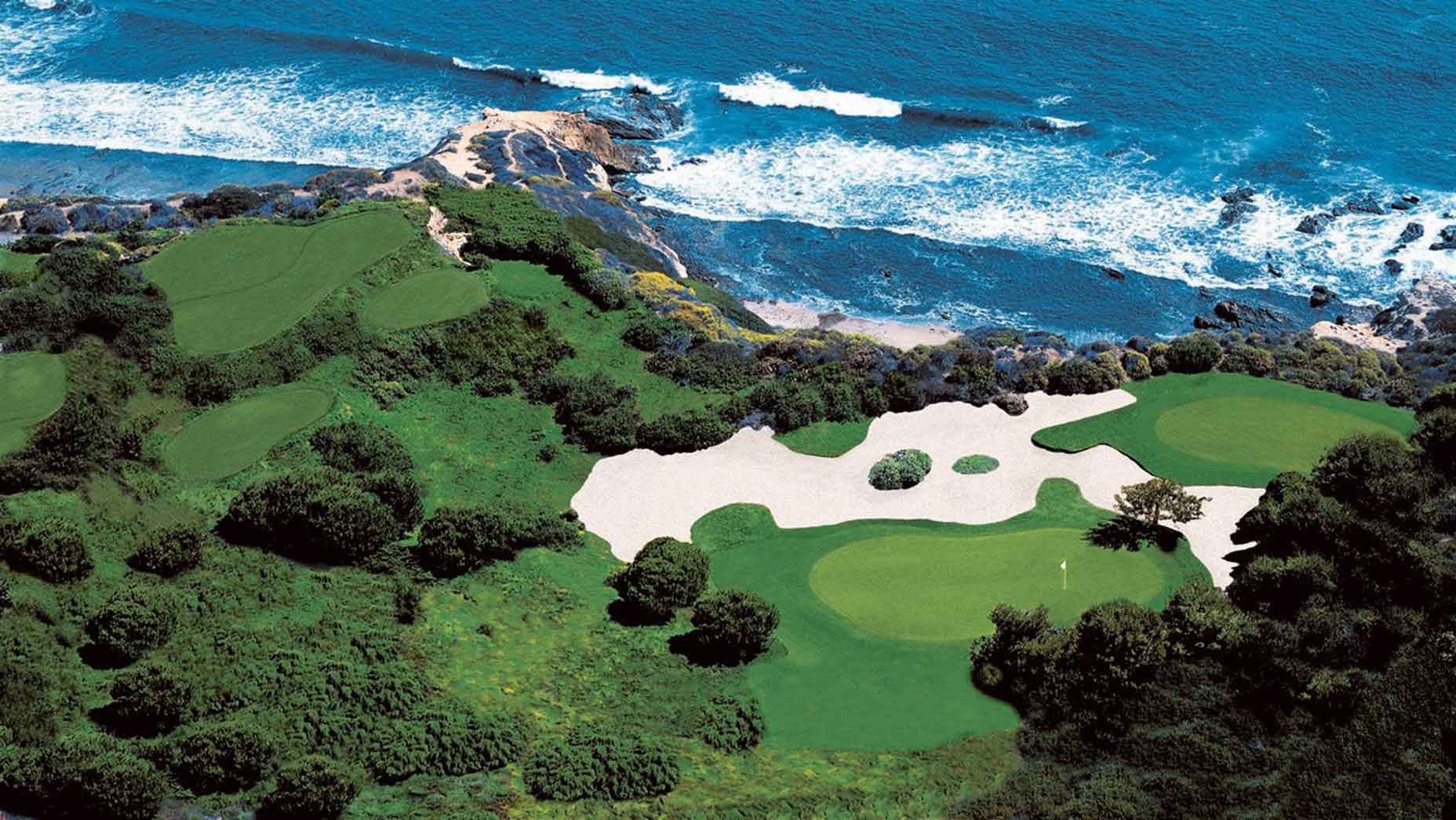 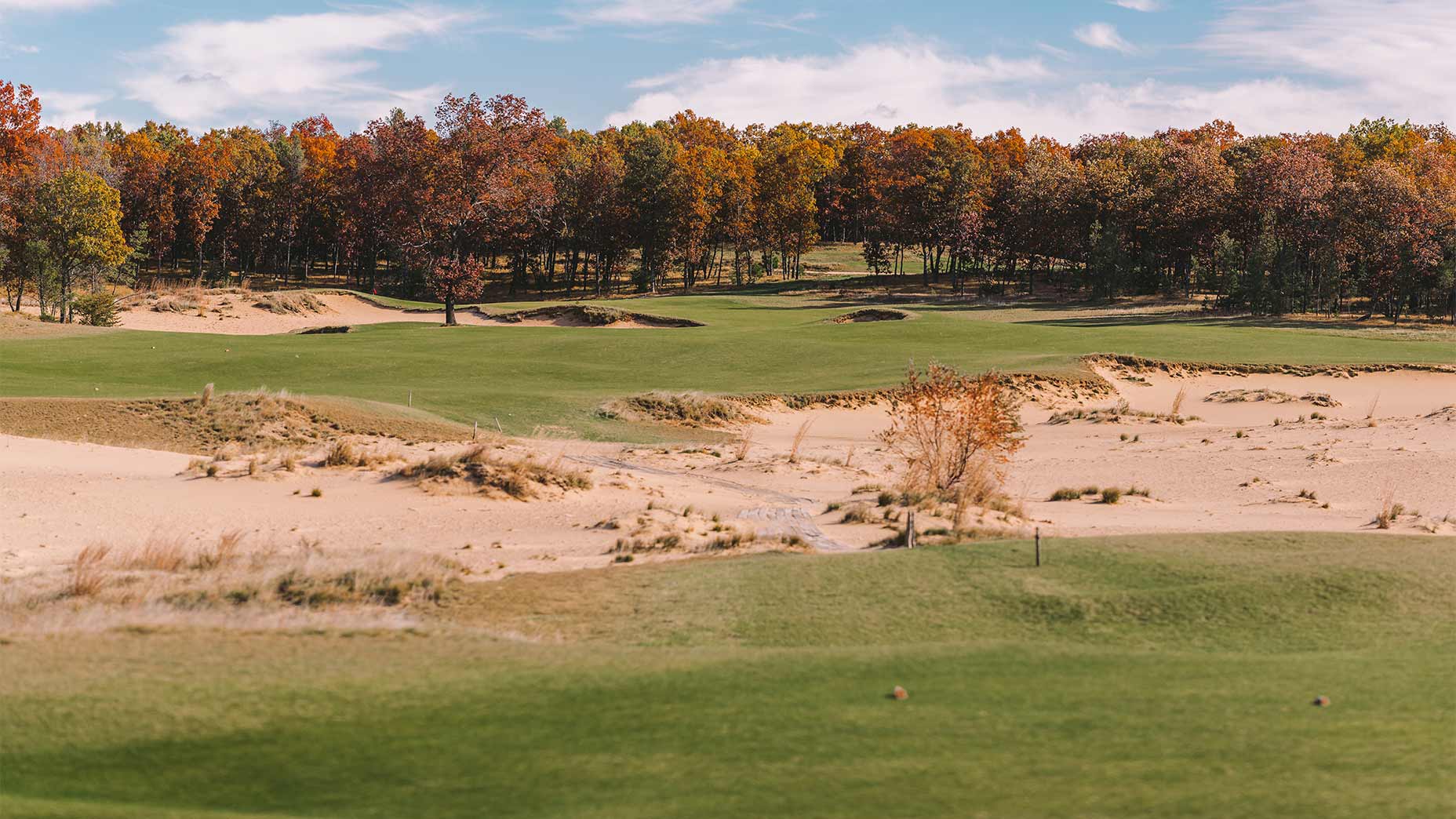