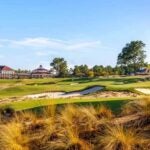 The Cradle at Pinehurst Resort is among the best par-3 courses in the world.

If you’re bad with number, you should love short courses. With less real estate to work with, the numbers stay low and there’s less math involved — great for those who have to pull out a calculator when tabulating their scores. And though this piece is number-centric, we did our best to dilute them enough so even the most math deficient among us can understand.

GOLF Magazine recently released its list of the 50 best 9-hole courses in the world, as well as the top 25 par-3 courses and top 25 sub-6,000-yard courses. While we recommend you check out all of these lists, here are six numbers to know about them if you are in need of a cliff-notes version.

In our compiling of these lists, we turned to 88 of the brightest minds on golf courses in the world. Expertise from our GOLF Top 100 Courses panelists was instrumental in this undertaking, with added input from our editors, architects from around the world and select other short-course aficionados. Though the courses may be small, the undertaking for this project was huge.

The shortest 18-hole course on our list is the 4,049-yard Kobe Golf Club in Hyogo, Japan. Kobe GC was built on Mount Rokko in 1903 and is still considered one of Japan’s most exclusive clubs. At just a touch over 4,000 yards, the course measures shorter than some nine-hole stretches in professional golf — the closing nine at TPC Colorado is 4,103 yards. But despite its miniscule scorecard yardage, Kobe GC is no slouch, with our expert calling it “as tough a walk as you will find.” Don’t judge a course by its scorecard.

The oldest course on our list is the historic Musselburgh Links in East Lothian, Scotland. The course was founded in 1672, making it 348 years old — over 100 years older than the United States. Though it is just a nine-hole track, Musselburgh is one of just 14 clubs to host an Open Championship, having crowned the Champion Golfer of the Year on its ground six times in the late 1800s. The course also holds a significant place in the history of the game as it is known as the place where the four-and-a-quarter inch hole diameter was first implemented.

Seemingly every other sport has derivatives of their normal format. From flag football to 3-on-3 basketball, there are variations that makes the game playable with less to work with. So why should golf be any different? Sometimes you won’t have time to dedicate an entire day to golf, hence the appeal of short courses. For par-3 courses on our list, we estimate they will only take 45 minutes to play. That can be done on your lunch break from work. For a nine-hole track, that number only bumps up to 105 minutes. And if you still want to play a sub-6,000-yard 18-hole course while still being time efficient? Try out a short course and you can be done in 180 minutes. Golf has a much broader appeal when it doesn’t monopolize an entire day.