Why one rogue golf course is defying governor’s coronavirus closures 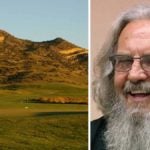 The mayor of Grants, N.M., Martin "Modey" Hicks, encouraged local businesses to reopen on Monday despite the governor's orders.

Welcome back to Muni Mondays, where we’re doing an awesome GIVEAWAY this week! Sunfish Golf is offering a free custom headcover to a lucky follower. To enter, all you need to do is follow @munimondays and @sunfishgolf on Instagram and comment the name of a course you’d want a custom headcover made for onto the latest post (HERE). That’s it! Then you’re entered! You can see their ridiculous level of custom options here. Now, on to the action:

On Monday, the mayor of Grants, N.M., Martin “Modey” Hicks, held a morning rally. Despite orders from governor Michelle Lujan Grisham, Hicks insisted that it was time for the city’s small businesses to reopen their doors. Then he said he was headed to play golf.

Across the country, golf has existed in a complex limbo in recent weeks as local leaders have tried to figure out whether the sport can be safely played. More courses are gradually opening their first tees — if not their clubhouse doors — and the National Golf Foundation reported Monday that 58% of courses are now open for play, a number expected to rise over the coming weeks.

But New Mexico is among the states with a public health order still in place that includes a ban on golf. That’s where Mayor Hicks comes into play.

Grants is a town of some 9,000 people located an hour west of Albuquerque. It initially sprung up in connection with railroad logging in the 1880s, thrived for a little while as the “carrot capital of the U.S.” and saw a small boom related to uranium mining, which lasted into the 1980s, when the population peaked at over 11,000.

In the decades since, businesses have battled to stay open. It’s a battle Hicks seems well aware of as he continues to lobby the state to open its doors. The Albuquerque Journal called Grants “a focal point in a revolt brewing around the state.”

“The governor is killing the state over a little bug,” Hicks said Monday, per the Middletown Press.

Governor Grisham had some strong words in response to Hicks’ planned defiance.

“This notion that you don’t have to comply is wrong. That you can just open up businesses and not worry about public health issues is really quite frankly tantamount to opening up a public pool and having a pee section,” Lujan Grisham said late last week.

“This makes absolutely no sense whatsoever, flies in the face of every single positive, productive, evidence-based public health effort and, quite frankly, I happen to know that the county commission is incredibly upset by these directions.”

No matter — Hicks insisted that “burgers will be flipped” at the restaurant of his municipally-owned course while golfers play on, according to the Albuquerque Journal. He insisted they’ll respect social distancing rules as they do so. After his rally on Monday, the mayor headed to the course with some two dozen others and played on, despite a warning from the State Police.

As for the golf course in question? That would be Coyote del Malpais. The course was designed by William Howard Neff, whose credits include a number of courses in northern Utah, and opened in 1994. The course measures over 7,000 yards, but you’ll get some extra fly with your drives — Coyote sits at over 6,000 feet elevation. In the background, Mt. Taylor rises much higher (11,300 feet, high point of the San Mateo Mountains). It gets cool in the winters, but Coyote stays open year-round, weather permitting.

Despite the connotations of a course in the high desert, there’s plenty of water at Coyote: 16 lakes, to be exact. No trees, no matter — wind and water play plenty of defense. The course remains affordable, too: state residents can walk nine holes for less than 10 bucks, while the top rate non-residents will pay is $23 to walk 18. Quite the deal for a round with a view.

For now, however, the local focus will remain fixed not on the course itself but the question of whether it will remain open. Phone calls placed Monday afternoon went straight to voicemail.

For her part, Governor Grisham hoped to come to a resolution. She said she thought he “meant well” in standing by his workers and his businesses.

“We [stand by them] too,” she added, per the Santa Fe New Mexican. “But you stand with them by keeping them safe, by following the rules and by helping us … make sure that as we go back to some degree of normalcy, including getting people back to work, that we do that in a way that protects every one of us.”

Local reporter Ryan Laughlin reported from on the ground that a cease-and-desist order had been sent to the golf course but confirmed the course’s management seemed in limbo.

“You can see they have police tape up behind us,” Laughlin said in a video posted to Twitter. “They were just issued a citation but they’re awaiting direction from the city manager if they’re open or closed. However, you can see way off in the distance there’s some people who just teed off. It’s a windy but nice day for golf, but police were here and said they can’t be operating.”

While the circumstances surrounding Coyote Del Malpais are certainly unique, they speak to a question asked by municipal courses across the country — 44% of which remain open. It’s a question that still lacks any simple answer.

UPDATE: You can see footage of the mayor taking a stand at the golf course on Monday via KOAT Action News here.