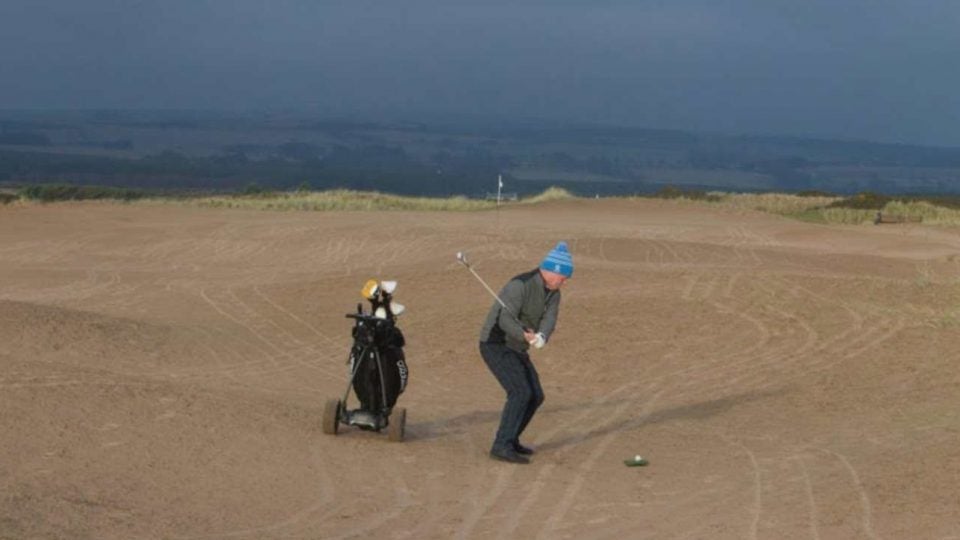 The second fairway at Montrose Golf Links was covered in sand after a storm on Saturday.

Scotland’s Montrose Golf Links advertises itself as the fifth-oldest golf course in the world; the rugged links have stood the test of time for more than 450 years on Scotland’s east coast. But the second hole, which overlooks the beach and the North Sea, was radically transformed during a weekend storm.

As sea levels have risen in recent years, the sea has crept closer and closer to Montrose’s first three holes — 70 meters closer in 30 years, according to research from Dundee University. When Storm Deirdre hit the area on Saturday, the high winds brought the beach to the course itself, blanketing the fairways and greens and filling holes and bunkers with sand.

Head greenskeeper Darren McLaughlin told PitchCare he’s never seen anything like it in 22 years in the industry, and locals have said this is the worst they’ve ever seen.

“This is a result of coastal erosion, the dunes slightly just retreating towards the golf course,” McLaughlin said. “When the wind turns to come from the southeast then effectively there is very little protection. It blows up towards the course, to the second fairway and leaves this fairly thick carpet of sand; and then the fairway is basically unplayable. I have never seen anything like that.”

Eight staffers were out tackling the issue by Monday, focusing on the bunkers in particular. McLaughlin acknowledged that they needed an industrial blower to clear the fairway, which wouldn’t be available until Wednesday.

While the photos and videos were shared good-naturedly, the club’s documentation of the event was intentional. “What the golf club is trying to make the relevant authorities aware of is that the golf course is at risk,” McLaughlin said. He is hoping authorities consider funding and take aggressive measures to slow erosion and keep the sea’s creep as slow as possible.

Montrose has been well aware of the sea’s threat for years. The links course was mentioned as a specific case study in a GameChanger report early this year detailing the potential effects of climate change on golf in Scotland. “As the sea rises and the coast falls away, we’re left with nowhere to go. Climate change is often seen as tomorrow’s problem, but it’s already eating away at our course,” said the course’s director, Chris Curnin, in the GameChanger study.

“More than 450 years of golfing history is at risk of being washed away by rising seas and coastal erosion linked to climate change,” the study read. “The combination of rising sea levels and reducing sediment is moving the shoreline further inland, effectively reversing the conditions that originally created the beaches and dunes.”

Just down the coast, Saturday’s storm was believed to be responsible for the tragic death of a police officer whose body washed up in Carnoustie’s famous Barry Burn.

Saturday’s weather left a “thick carpet” of sand on the second fairway of Montrose Links, rendering it practically unplayable at the weekend.
The fairway is not expected to return to normal until an industrial blower is brought in to clear the sand later this week. #montroselinks pic.twitter.com/yyyEc2irYd