MONTAUK, N.Y. — If you’d like to understand a little bit more about America, spend a morning on Montauk Highway.

Long Island has always served as a fascinating proxy for the world around it, and particularly so on the East End. Long before we were divided into matters of blue and red, the East End was separated on much simpler terms: the haves and have-nots.

Each summer, the Hamptons served as a playground for the mega-rich, an escape for New York City’s most well-to-do individuals during the summer months. From the beginning, the Hamptons was a one-percenter’s paradise, but that didn’t stop those who summered there from creating even smaller enclaves: exclusive clubs, exclusive neighborhoods, and of course, exclusive golf courses.

For those living nearby, summer in the Hamptons offered something else: their paycheck. When the wealthy travel, they bring their money with them, and why shouldn’t their destination carry the same creature comforts of home? For everyone else — the cooks, the cleaners, the contractors, the caddies — the Hamptons was a job site, a place where they could look but not touch.

Montauk Highway is the only means of transportation to the East End. The winding, one-lane road is the area’s only connector, with stops in Southampton, Bridgehampton, Easthampton, Amagansett and, finally, Montauk. It is locally famous for its traffic, which is at best a nuisance and at worst reminiscent of [shudders] New Jersey. But as the only show in town, East-Enders have no choice but to grin and bear it, taking the (sometimes soul-crushing) delays on the teeth.

On a typical morning, Montauk Highway is a glorious gumbo of America’s class divide, a place where European sportscars and roofing vans share the common misery of bumpuh-to-bumpuh traffic, in the local parlance. But as you crawl along, keep an eye on the horizon. It shouldn’t take you long to spot a golf course.

The beaches were the East End’s original draw. Golden, bakery-soft sand and warm, clear waters made for the ideal summer destination, helped only by swaths of untapped oceanfront property. It didn’t take long for the area’s new residents to realize the sandy soil was also perfect for golf. By the late 1800s, the legends of golf course architecture — Seth Raynor, C.B. MacDonald and William Flynn, among others — started work on courses that would define the next century of American golf.

Today, a solid chunk of the world’s most-exclusive golf sits within a stone’s throw of Montauk Highway: National, Sebonack, Maidstone, The Bridge, and did we mention Shinnecock? These courses are, we’ve been assured, the very best in the world. Not that most of us have ever seen them — for many of Long Island’s biggest golf diehards, invitations to the courses on the above list arrive as frequently as winning lottery tickets.

So what did Long Island’s biggest golf diehards do? They opened a muni.

Montauk Downs wasn’t always a state-owned paradise. Like most other historic east end gems, it relied on private money for its founding, opening as a semi-private course in 1927. English course architect Captain H.C.C. Tippett is credited with the course’s initial design, which zigzagged through a hilly inland stretch, though C.B. MacDonald is believed to have helped with the effort. In 1968, more private money lured architect Robert Trent Jones, Sr. to conduct a redesign, turning the club completely private under the name “the Montauk Golf and Racquet Club.”

But Montauk and country club life proved strange bedfellows. The tiny, easternmost tip of Long Island has long lagged behind the glitz of its Hamptons counterparts, embracing an ethos centered around beach bums and surfer bros (the Fortune 500 CEOs, locals figure, will be just as happy in Southampton). For many years, Montauk’s most prominent residents were fishermen and its most famous restaurants were a pair of pancake houses. It took just 10 years for Montauk Golf and Racquet to fall into a state of disrepair.

In 1978, the club’s owner, Montauk Improvement Co., put the club up for sale and quickly found an eager buyer: the New York State Parks Commission. As luck would have it, the state was considering building its own golf course at a park just down the road, but concerns about the environmental and financial costs the endeavor had brought early plans to a halt. It’d be much easier (to say nothing of cheaper) for the state to simply absorb the operations of an existing course.

By the end of that year, the state had finalized the sale of Montauk Golf and Racquet Club for the bargain price of $1.3 million. And by 1980, the club reopened as “Montauk Downs State Park.” Ironically, the first state-owned municipal course on the East End had opened just a few hundred feet from Montauk Highway.

These days, Montauk Downs is almost as hard to reach as its glitzier cousins.

In the summer months, landing a tee time at “the Downs” can border on impossible. From mid-April well into late September, the tee sheet is typically sold out a week in advance. The state maintains hourly walk-up times just to satisfy the demand. Sometimes, that isn’t even enough.

The course is as good today as it has ever been. America’s COVID golf boom has paradoxically done wonders for the course’s conditioning, presumably the result of additional state funding. A multimillion-dollar Rees Jones facelift in 2008 helped to accentuate the contours and green shapes from his father’s original design. Last year, GOLF’s course raters named it the 17th-best muni in America.

A recent mid-October trip found the golf course in surprisingly perfect form — its greens were firm and pure, its fairways bouncy and green, and its tee boxes neatly manicured. The clubhouse — famous for its pyramid shape — looks largely (and charmingly) unchanged from the 70s. The Downs is muni golf in all the ways it should be: fun, well-maintained, and a hair under $50.

There is still one key difference between Montauk Downs and the rest of East End golf: its clientele. On a cold October Wednesday morning, the groups lining the fairways in Montauk included a foursome of firemen with a U.S. flag attached to their golf cart, a group of college-aged kids chasing pushcarts, and a handful of gruff-looking men who’d driven in, music blasting, from points further west. It was still freezing at 9:30 a.m. — a shade over 40 degrees with a howling wind — and yet the starter dutifully informed groups that most of the day’s remaining tee times were sold out. 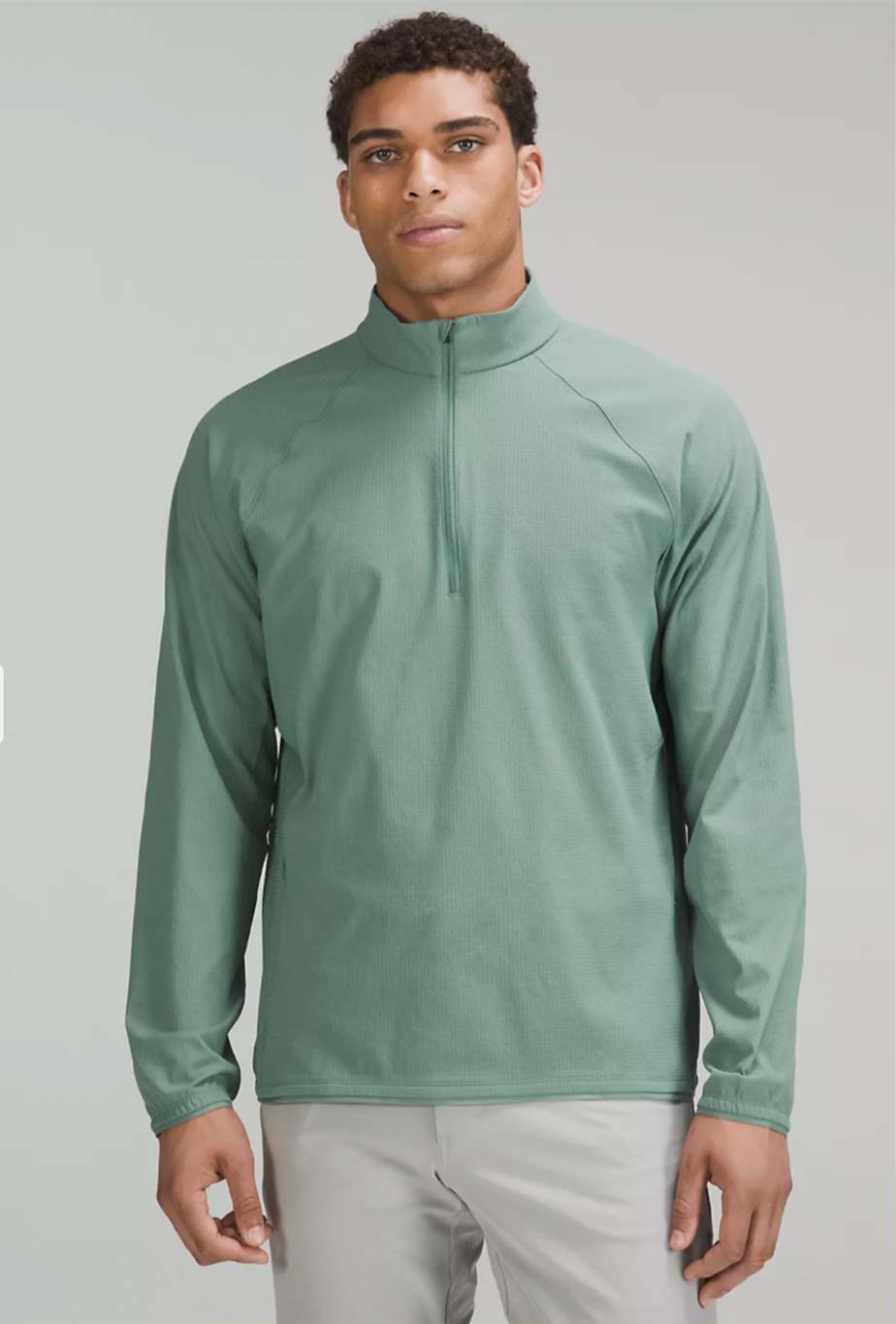 Gear up for your next cold weather round with Lululemon

The Lululemon golf half-zip is water-repellent, warm and uber-comfortable — the perfect top for wherever your cold weather golf journeys bring you.
Buy Now

Perhaps it shouldn’t be a surprise. The Downs is to Long Island’s golf scene what Montauk is to Long Island: a hideaway. While the world’s elite shuffle from club to club, the people who serve them dinner and build their vacation homes scrounge for a time at Montauk Downs.

But this is where the line between Montauk Downs and the world around it runs blurry. The Downs belongs to all the people, and that includes those who take up membership at the clubs further down Montauk Highway. It is not common to run into a member of golf’s elite at Montauk Downs, but it is not uncommon, either. This does not sit well with some locals, the ones who worry their course remains one of the last vestiges of an East End culture they see evaporating.

Of course, the locals are allowed to worry about the Downs, just as Shinnecock’s membership is allowed to play it. For as long as it is state-owned, none of that is subject to change. At the golf course, at least, those two groups will find common ground.

This, after all, is what makes Montauk Downs great. In golf as in life, we are far more similar than we realize.

Now isn’t that an American story?

The writer welcomes your thoughts at james.colgan@golf.com.