Whistling Straits is ready for the Ryder Cup (and your road trip).

Buckle up, folks, and welcome to the first installment of America’s Best Golf Road Trips, a six-part GOLF.com series in which our well-traveled writers will guide you through some of the most thrilling itineraries for golfers with a nose for the open road. Each journey will be built around golf but we’ll also sprinkle in a few other sights and stops along the way. Bon voyage!

One of the most underrated — and scenic — public-golf tours in the country is the little-traversed Lake Michigan Loop. Beginning in Milwaukee, stopping in Green Bay (and yes, of course, at Lambeau Field!), touching off Michigan’s Upper Peninsula and working your way south toward the Windy City, you’ll enjoy plenty of epic golf, and a taste of Midwest delicacies, all in one week. We’re talking beer, cheese curds, walleye and deep-dish pizza. Bring your golf game, and an appetite.

Some golf trips you ease into — maybe a round at a local muni or another course that won’t beat you up to make sure your swing traveled with you. Not this trip! We get you stared with a beast: Erin Hills. The only course to host a men’s U.S. Open in the Badger State can stretch to more than 8,000 hilly yards and is one helluva walk. It is Erin Hills, after all. If you can fly into Milwaukee’s General Mitchell International Airport in the morning, you’ll have no problem making it to Erin (less than an hour’s drive northwest) for an afternoon tee time.

The grand finale 18th at Erin Hills, a 675-yard par-5 from the tips, is worth the many steps, on the first 17 holes, it will take you to get there. Can you make par on one of the longest holes professional golf has ever seen? Can you make a bogey? An oft-used caddie trick is to present a foursome with the best-ball over/under of 6.5 and see if anyone can beat it. If not, the caddie wins and takes home a little extra dough on top of their gratuity. If so, the entire group wins, and you can head off to enjoy some of the best 19th-hole cheese curds on the planet. Before bed, a mandatory stop at The Drumlin putting course is in order. Three-putts after three drinks is the only way to end your day.

Wisconsin’s other major championship host course, Whistling Straits, is just an 80-minute drive from Erin Hills and introduces you (in a bold, beautiful way) to golf on Lake Michigan. This being the Lake Michigan Loop, you’ll be properly acquainted at Whistling, where half the holes run alongside the lakefront. If it’s breezy, you’re in for one incredible test.

The 2021 Ryder Cup host has one of the best finishing stretches in golf, with a par-5, a par-3 and a brutally tough par-4 to close out the Wisconsin portion of your trip. Card an aggregate 12 through those holes and you can feel free to write home about it. As for lodging, book a hotel up in Green Bay (just an hour north) near Lambeau Field and take a tour of one of football’s most hallowed grounds. They’ll even let you onto the field, where if you listen closely you’ll hear Coach Lombardi berating you for that double-bogey on 18.

The second-longest leg of your trip is one of the more gorgeous stretches of land-meeting-water in the Midwest (and there’s plenty to choose from). Highway 35 runs along the Bay of Green Bay as it blends into Lake Michigan just north of the Wisconsin-Michigan border. Follow it north and you’ll eventually reach Marquette Golf Club and its Greywalls Golf Course.

Rest assured, you have never played a course like this one. Greywalls winds up and down a rocky hill, in which the fairways are carved out among boulders, embankments and rock walls. Some holes call for daunting carries while others simply ask that you make contact and watch your tee shot roll forever. But if your game is locked in, you’ll make some of the most rewarding pars in the land.

Time for a break, eh? It’s coming! Another three-hour drive east, across the northern reaches of Wisconsin, will lead you to the ultimate spot to unwind: Mackinac Island, in Michigan. Life moves a little slower once you cross onto Mackinac Island, where cars are not permitted (so you’ll get a break from the road, too!). Bikes rule here, so take a day off from the golf and enjoy the scenery of a quaint tourist town with a population of 471 and dreamy lake views. If you’re jonesing for more golf, play the 9-holer Wawashkamo Golf Club and recharge your golf batteries with an easy-breezy loop. This trip is just reaching its halfway point.

Life moves a little slower once you cross onto Mackinac Island. 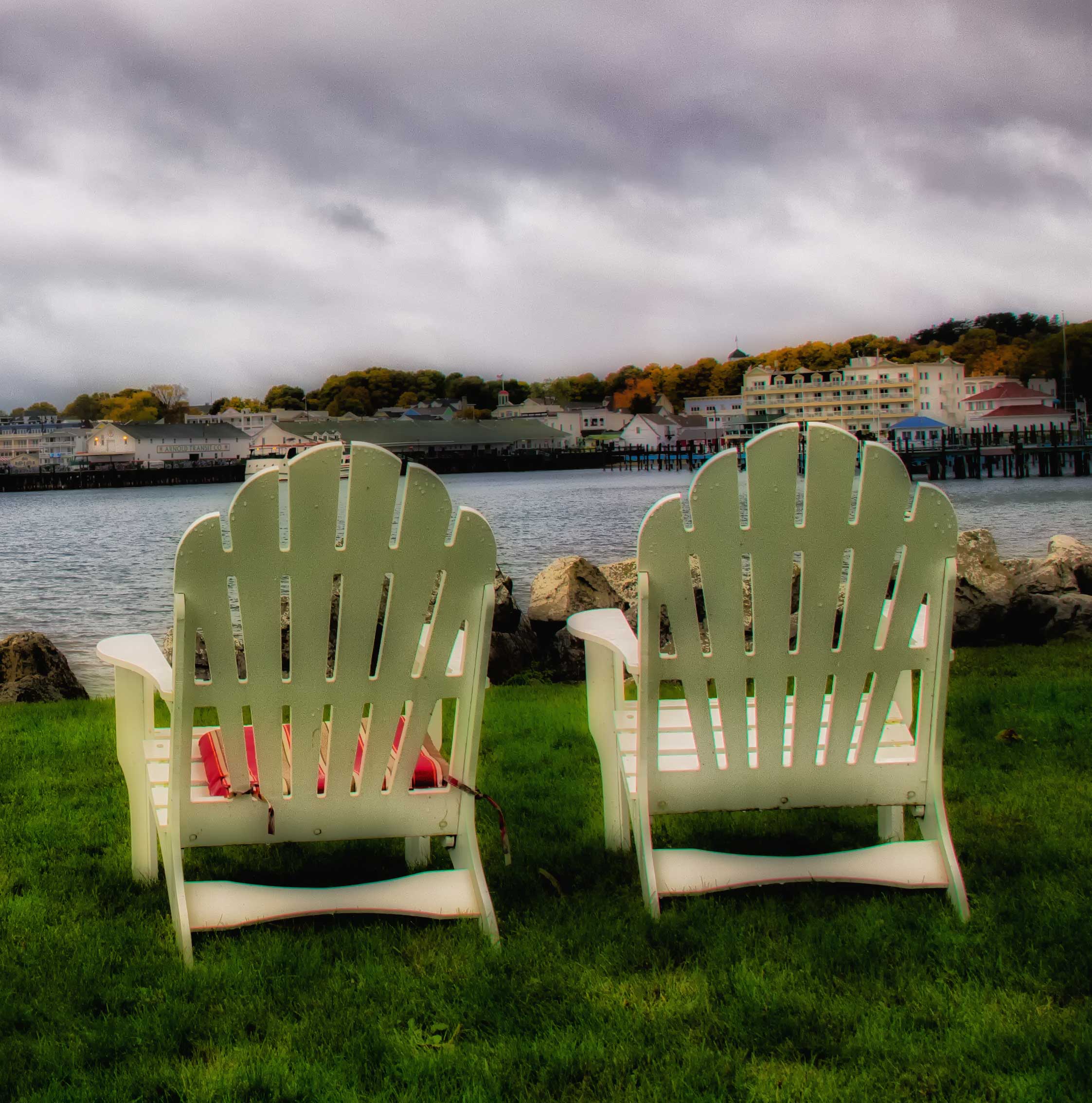 Every good golf trip has variety, which is where Forest Dunes — 90 minutes south of Mackinac — shines. It has … everything. There’s the main course, called Forest Dunes, and also The Loop, a truly reversible 18-hole track designed by Tom Doak, which has earned wide acclaim. It will change the way you think about golf course design, and it begs for multiple rounds. So, perhaps consider spending days 5 and 6 here, and take in The Loop the way it was designed to be experienced.

Forest Dunes also has a short course and putting course on-site, and plenty of lodging. We won’t stop you from staying here longer than anywhere else, and playing until sundown.

When you’re able to pull yourself from Forest Dunes, head back toward Lake Michigan and drive two hours west to Arcadia Bluffs, which also features multiple tracks. The crown jewel is the Bluffs course, which looks and feels a bit like Whistling Straits, with fairways weaving in and out of the dunes. Playing it in the afternoon will offer a sunset over that gigantic water hazard called Lake Michigan. That’s what you’ll take in over a post-round pint and the freshest walleye you’ll ever taste. Midwestern bliss!

Ready your jerky and Mountain Dew: the last day of the trip brings with it the longest stretch behind the wheel, but thankfully the end is in sight! First stop, four hours south, is Notre Dame. Check out the iconic stadium, snag a selfie with Touchdown Jesus and keep moving! Soon you’ll be looping around the base of Lake Michigan and in no time the Chicago skyline will be in view.

A short detour inland will land you at Cog Hill, widely regarded as the best public track in the Chicago area. Cog Hill was the site of Matt Kuchar’s 1997 U.S. Amateur win and has also played host to many BMW Championships. Tiger Woods has won here five times, and you’ll do well to match his course record (62).

When that final putt drops at Cog Hill, you’ll have played six Midwestern gems. Hungry? You’ve earned the right to fill up on one last Midwest delicacy: deep-dish Chicago pizza. Lou Malnati’s is a local favorite that has been doing it for more than 75 years. We guarantee it’ll be the most memorable slice of your trip.