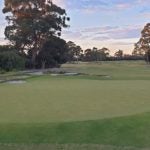 A view of the green back toward the tee of the par-4 3rd hole at Kingston Heath.

Our knowledgeable crew of course raters have stuck pegs in the ground just about everywhere. But which holes stand out as the greatest they’ve ever played? We asked them, and they replied with love letters about their faves. This offering comes from John Cornish.

My approach to determining a great golf hole starts at the green and works backward to the tee, asking a myriad of questions along the way.

The par-4 3rd hole at Australia’s Kingston Heath is a perfect example. At a smidgeon over 300 yards, it may seem an unlikely candidate for a Best Of list. But the options offered from the tee and the risks involved to get to the green place it comfortably among the best short par-4s among the courses on GOLF Magazine’s World Top 100 list.

The safe option is to play to the left of the fairway — short of the fairway bunkers masterfully placed by Alister MacKenzie in his bunker plan in 1926 — leaving a full pitch to the green. A bolder approach is to play a long iron or fairway wood short of the greenside bunkers, avoiding the fairway bunkers and the native tea tree hugging the narrowing fairway. From there, the next will invariably be a short pitch, rather than a full shot, to a challenging, gently undulating green. Those channelling their inner-Rory may unsheathe driver and blaze away at the green, but this only presents the greatest challenge — stopping the ball on a medium-sized, narrow, sloping green, angled at 45 degrees to the line of the fairway.

The green slopes back to front and generally right to left toward two deep bunkers that catch any pulled approach, especially when playing an aggressive shot to a left hole position. The right side of the green is no bargain either. It is protected by five slightly shallower bunkers starting 40 yards from the front edge, playing tricks with your eye. From the sand on the right, the green surface runs away from you, raising the risk of those deep left-hand bunkers. A less-than-perfect shot will often creep down the fast Bentgrass greens and off into the sandy abyss beyond. With a false front and a sharp drop off to the back, the middle of the green is the place to be.