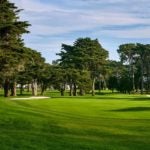 A view of the 466-yard par-4 2nd hole at TPC Harding Park, which will host this week's PGA Championship.

The first major of the year, the PGA Championship, is upon us, and it’s taking place at a muni, TPC Harding Park, in San Francisco. Help us get a handle on a layout that’s accessible for everyone to play.

What do you make of Harding Park as a major venue? Good? Bad? Somewhere in between?

Josh Sens (panelist since 2013; has played 68 of the World Top 100): I don’t think of Harding as catnip for architecture nerds. It would not be an inspired choice for a U.S. Open. But it fits the mold for the kind of course — brawny, tree-lined, relatively flat — that the PGA Championship has so often been held on, and in that sense, I think it’s well-suited for its role this year. Throw in the location (San Francisco!) and the surrounding infrastructure, and Harding makes good sense as a host of this particular major, though of course in these unusual times, all of those trappings are less relevant than they would be ordinarily.

Thomas Brown (panelist since 2015; has played 95 of the World Top 100): Good, maybe even exceptional, if we measure it by the past list of champions at Harding Park: Tiger Woods, Rory McIlroy, Ken Venturi, Gary Player, Byron Nelson. Match play events, including the Presidents Cup, have been a success. The design and the conditions playing soft in the fairway make it more suitable to discuss championship history rather than golf architecture. In the last few weeks, the Bryson DeChambeau reaction has had the likes of Ernie Els and Webb Simpson opining that championship tests should focus professional golf on higher rough and more doglegs. Harding’s setup for the PGA Championship is led by Kerry Haigh. Over the past 20 years, Haigh has an admirable record of keeping his name out of championship proceedings for the PGA. He has a sensible approach to hole locations and adjusts accordingly to changing weather. Slopes on the greens at Harding are relatively flat, allowing for fast greens if there is no wind in the forecast.

Noel Freeman (panelist since 2010; has played 81 of the World Top 100): I am really ambivalent about endorsing Harding Park as a major venue. I understand the politics and history of this as well as the longing to want to return to the West Coast and at a public venue, but other than the 18th hole there is little memorable about Harding Park. The original course done in the 1920s would have been very interesting to play and the recent renovation smacks a similar ethos to what occurred at Bethpage. What we have now is a long and strong course, which is still wall-to-wall grass, tree-lined and relatively flat with minimal internal hazards. Perhaps with more bunkering like San Francisco GC a few miles away it would be a more interesting design, but it already is a tough slog for players and bunkering would slow it down even more. For the pros, last I saw (I drove past the course two weeks ago) it was green and the rough was thick. Still it does not require them to move their ball around (like Olympic) and with the equipment today they will eat this up unless the wind blows in the morning. This is a solid golf course but I’d rather have seen a return to Chambers Bay if that were possible (U.S. Open rota may impede).

What’s the best hole at TPC Harding Park, and why?

Sens: I’ve always been partial to the short par-4 16th, which is pretty much straight away as the crow flies but plays as a slight dogleg because of a cluster of giant cypress trees on the right. Some 30 years ago, when I first started playing Harding, there was a forest of those suckers, and if your drive drifted into them, there was a good chance the ball would simply nest in the branches and never drop. And if it did drop, you’d almost certainly have no shot at the green. They’ve since removed a number of those trees, so the hole has lost some of its aesthetic appeal and its strategic demands. Now you can stray right and you still might have a play into the green. But the hole retains the risk-reward charms of a good short par-4, with your target off the tee getting narrower and narrower the more aggressively you play, and the possibility (for a big hitter) to drive the green. It requires some thinking. And it should provide some good drama during the PGA.

Freeman: I, too, am partial to the short par-4 16th because of the subtleties of the tee shot and where to place it. It looks like a easy 4 for the scorecard and can easily be a double bogey if you get out of position. Of course Bryson may drive this hole.

Brown: The 18th hole. The closing hole is a scenic tee shot over a Lake Merced inlet. It has a great sense of place. At 463 yards, it sounds like a long par-4 for you and me, but most of the field will be playing an 8-iron or less into the green.