The best hole I ever played: Why this is the greatest hole at Pebble Beach 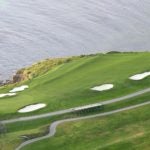 If you are playing the par-5 6th at Pebble Beach, don't miss right.

Our knowledgeable crew of course raters have stuck pegs in the ground just about everywhere. But which holes stand out as the greatest they’ve ever played? We asked them, and they replied with love letters about their faves. This offering comes from Michael Pelliccione.

At the 2000 U.S. Open, while playing the par-5 6th hole at Pebble Beach, Tiger Woods smashed his 7-iron from 205 yards out of ankle-deep rough and found the green, two-putting for birdie on his way to a 15-shot victory. That shot on No. 6 seemed so impossible that Roger Maltbie simply said, “It’s just not a fair fight.”

But when asked to name their favorite hole at Pebble Beach, most golfers cite the 7th, 8th or 18th. But for me, the 6th takes the cake. For starters, it’s one of the most beautiful golf holes in the world. And while the previous five holes give you a glimpse of the Pacific, it’s here where the ocean really comes into view.

Standing on the tee high above the fairway, one might feel the urge to let your tee shot fly, but don’t be lulled into a false sense of security. Though the fairway is one of the widest on the course, you can’t just hit it anywhere. The left side is littered with bunkers to penalize those looking to bail out, while the right side is property of Stillwater Cove, which comes into play more readily than it appears. Simply put: don’t go right!

You must then negotiate a blind second shot from a downhill lie up and over a steep rise that towers above you. It’s here where the real heroics begin. You can lay up short or swing big (though not with the same club as Tiger). That dusty 3-iron that you’ve been avoiding all season is about to make its debut. There’s no guarantee, but this is Pebble Beach and everyone who comes to Pebble Beach will take the bold option.

Like your drive, the shot into the green is best suited if you avoid the right side, or your ball will join hundreds of others at the base of the cliffs below. After you’ve navigated all that and scaled the cliff to locate your ball (ideally, on the putting surface) you’ll get a sense that you just successfully conquered one of Pebble Beach’s most demanding shots!

As you walk off the green, look back and reflect on what you just played. How one hole could provide such theatrics is what makes it so brilliant. But don’t worry: this was just the start of the best five-hole stretch in golf. Up next is the iconic par-3 7th. Pray it’s not downwind!