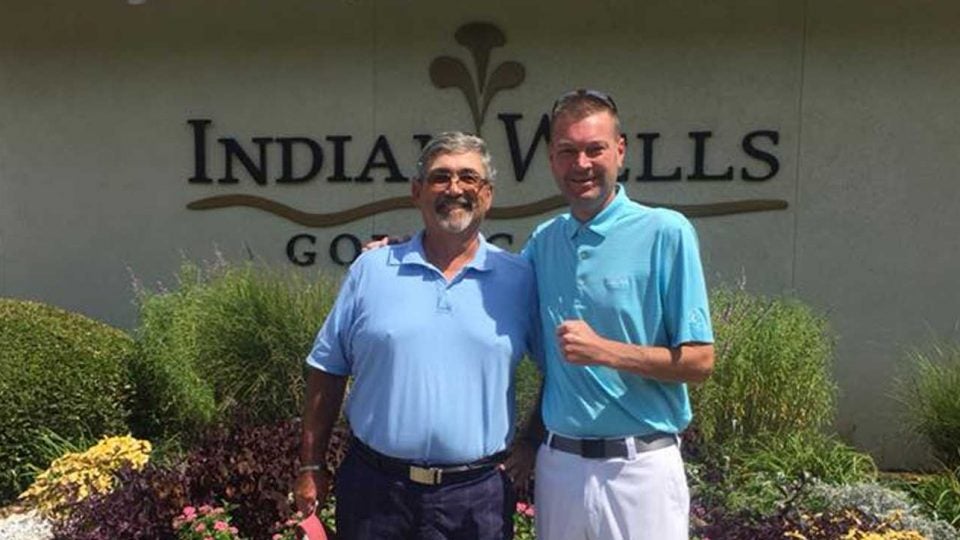 Harry Whitt, left, lucked out that Bobby McCullough was nearby.
Facebook.com/IndianWellsGolfClub

A scary scene at the World Amateur Handicap Championship turned into a heroic moment for a Myrtle Beach golf pro two weeks ago.

Harry Whitt, 65, was playing in the event when he collapsed under cardiac arrest on the 15th hole of Indian Wells Golf Club. Whitt’s playing partners sprang into motion, calling 911. According to this feature story from MyrtleBeachonline.com, they also called the pro shop, where they reached assistant pro Bobby McCullough. McCullough, well trained in the golf swing, has also trained as an EMT. He sprang into action, rushing to the 15th tee box to apply “aggressive CPR” to resuscitate Whitt, who didn’t have a pulse when McCullough arrived on the scene.

The report comes from reporter Alan Blondin, who spoke with Whitt, McCullough and another assistant pro at the course. “I did not feel a pulse on Mr. Whitt, so I began and took over compressions at that point,” McCullough told Blondin. “As time elapsed, I did regain a pulse and was able to feel it and sustain it.”

An emergency crew soon arrived and transported Whitt to a local hospital, where he miraculously survived. According to story, the chance of survival in a situation like that is roughly 2%. Just days later, Whitt stopped by the golf course to meet the man who saved his life.

“That was pretty powerful,” McCullough said. “It was, because that’s just not something you’re used to in the ER. …If they are somebody saved, they’re either kicked up to [the intensive care unit] or shipped to MUSC. You may never see them again.”

Check out the full story from MyrtleBeachOnline.com here.