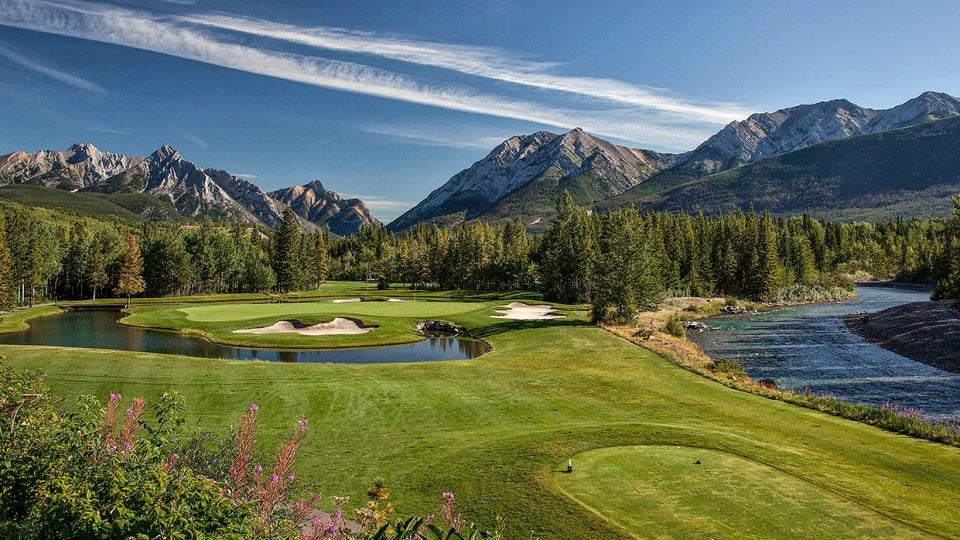 At 254 yards, the sheer brawn of the par-3 fourth on the Mt. Kidd course at Kananaskis is matched only by its incomparable beauty.
Steve Baylin

Back in the day, when the exchange rate meant that a trip across the northern border was a slam-dunk for U.S. golfers seeking maximum value, Kananaskis Country Golf Course was the “it” course on any itinerary. Hewn in 1984 from a river valley floor an hour west of Calgary, Kananaskis’s two courses, Mt. Lorette and Mt. Kidd, bore the unmistakable design imprint of—once again—Robert Trent Jones Sr., who famously praised the site as “the finest location I have ever seen for a golf course.”

Hyperbole aside, the setting was stunning. Stone-dappled rivers, dense pine forests and Jones’s magnificent, brilliant-white, jigsaw-puzzle bunkers presented beauty and menace against an outrageously gorgeous backdrop of the snow-capped Canadian Rockies. And nobody ever paid more than $100 to play. Then, disaster. It came not in the form of a currency fluctuation but as a calamitous flood in 2013. The violently churning water rendered the courses unrecognizable, with 32 of the 36 holes buried in muck and debris. There was talk of closing them forever. Fast forward to a happy ending.

After five years off the grid, Kananaskis Country Golf Course is back. Calgary-based architect Gary Browning and roughly $20 million from Alberta, the province that owns the courses, have breathed new life into Kananaskis, which reopened in May. Browning softened some of the more penal features of the old designs, widening fairway landing areas, cutting down the size and number of bunkers, and smoothing out the heavily contoured greens. In all, however, Jones’s masterpieces are intact—as are the modest green fees, at $52-$112 USD. Bargain hunters, Go North!