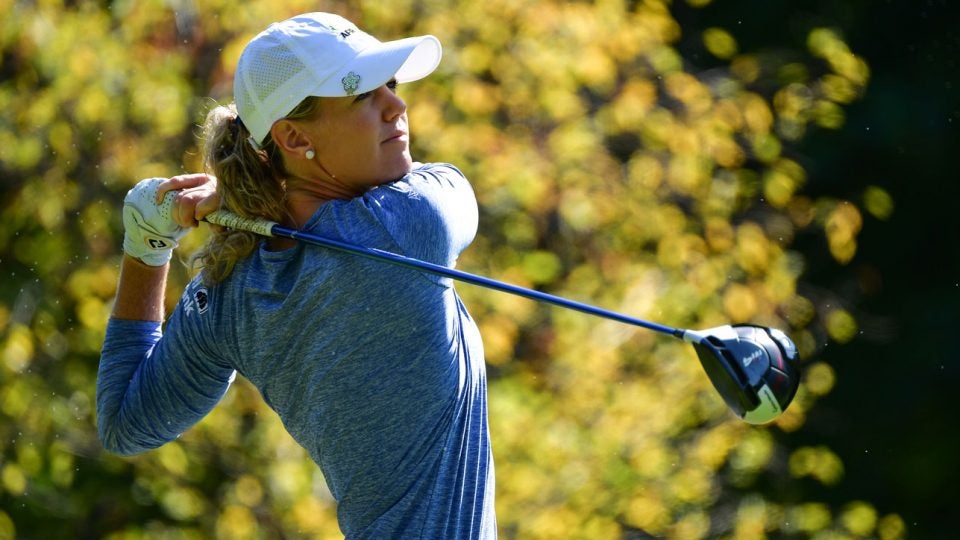 Amy Olson is seeking her first major at the Evian Championship.
Getty Images

Can Amy Olson become the first American to win an LPGA major this season? Can anyone from a sizable chase pack catch her on Sunday? Here’s everything you need to know from the third round of the Evian Championship.

Who’s winning? With one lap ’round Evian Resort Golf Club to go, American Amy Olson is out in front by two. Her spectacular bogey-free Saturday six-under 65 included an eagle at No. 9 and three birdies coming home.

“I really enjoyed (the nerves), that means I care, right?” Olson told LPGA.com. She has never won a major but was in the final group at this year’s ANA; a final-round 72 left her T9.

Who’s chasing? South Korea’s Sei Young Kim played one of the rounds of the day, carding seven birdies en route to a near-flawless 64. She holds second place alone at 12 under.

Shot of the day:

.@AmyOlsonGolf with an eagle to take the outright lead at the @EvianChamp!?

Olson’s eagle at No. 9 gave her the outright lead. Now she just has to preserve it.

Photo of the day:

Evian Resort overlooks Lake Geneva and, well, there’s not much else to add.

How can I watch?

Final-round TV coverage of the Evian is available on Sunday: