Erie’s Kahkwa Club endured a historically bad winter, but that didn’t keep its stalwart super from the job 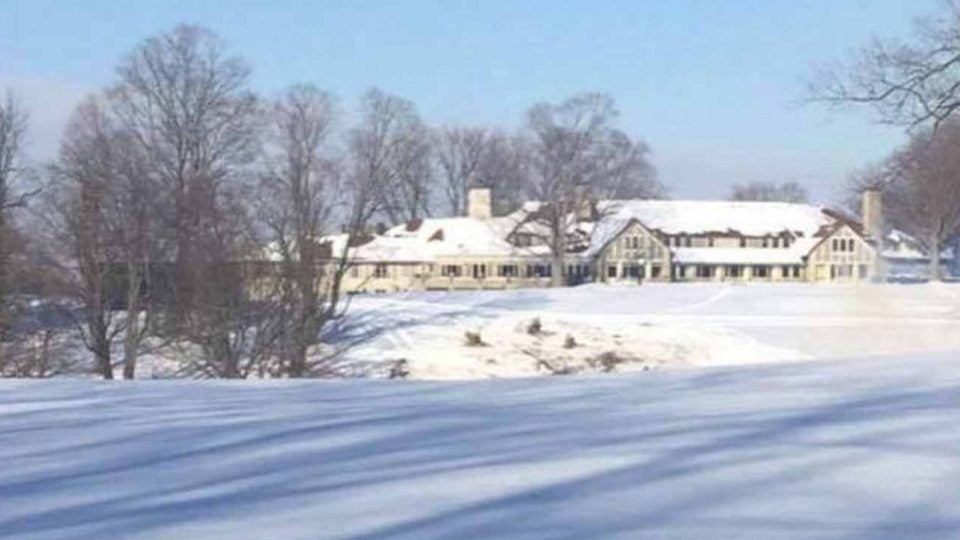 Growing up, spring arrived by ritual. My mother weeding her flower bed. Opening Day box scores dropped on our gravel driveway, along with Dave Anderson stories with Augusta datelines in the New York Times. “Jumbo, Jumbo” was the headline of his Saturday column from the ’73 Masters. Jumbo Ozaki, tiptoeing through Amen Corner. Spring! The new one is probably already in bloom for you, and by now you know what I don’t: the name of the man suddenly at large in the world in a green, three-button sport coat.

I am typing up this field report a month before the new winner will emerge from Butler Cabin. On the first Thursday of March, I made an eight-hour drive from Philadelphia, where I live, to Erie, Pa., my trusty Subaru’s windshield wipers barely able to keep pace with the driving snow on the final stretch of I-79, the radio catching static-free Cleveland Indians spring-training baseball. Erie is midway between Cleveland and Buffalo, on Gordon Lightfoot’s Lake Erie. Maybe you heard about the five feet of lake-effect snow the city got in late December. Merry Christmas.

I parked in front of a State Street taproom (with an impressive Lenten menu), my ears assaulted by the scratching of a metal shovel on a cement sidewalk. Inside, a local TV weatherman was predicting the final snow tab for this wraparound season: 175 inches. That’s 14-plus feet and thought to be an Erie record. A standard flagstick, by the way, stands half that tall.

I had come to Erie to see The Kahkwa Club in the snow. Erie is a vastly underappreciated golf town, and its Merion is Kahkwa, a pure, century-old Ross course known and liked by various Tour players of a certain vintage. For about 15 years, in the 1980s and ’90s, Kahkwa (American Indian names abound around here) was the home course for a two-day summertime pro-am called the Greater Erie Charity Golf Classic, once won by Lee Trevino and John Daly. The tournament elders flew the players in, put them up at a downtown hotel and handed the winner a handsome check on the home green—40K to Willie Wood in 1997. Big bucks.

On a wall leading to the office of the course’s scholarly superintendent, Justin Sudo, there are large, framed color photos of Fred Couples and Fuzzy Zoeller and other Erie Classic participants you’d pay to watch. One of the super’s main winter tasks is to oversee the maintenance of the club’s cross-country trails, five miles in all. When the snow is too heavy for Sudo to make the hour drive home, he sleeps on an air mattress in a maintenance shed meeting room. For breakfast he eats hard-boiled eggs and peanut butter he buys at the Walmart down the street. No bread. He’s gone low-carb.

A bad winter for Sudo is the rare snowless one where his club’s sloped Ross greens go white with frostbite. Snow, he explained, insulates the putting surfaces, protecting and warming the greens as a wetsuit protects and warms a surfer’s skin. (Kahkwa has all your Ross favorites: a Punchbowl green, an Infinity, a Dome.) But 175 inches? That’s ridiculous. Yes, it melts and contracts, and by early March there was barely a foot. Still.

The next few days could bring some of the coldest weather in years for much of the country. @DeMarcoReports begins our @CBSEveningNews coverage in Erie, Pennsylvania, where a snow emergency remains in effect with more than five feet on the ground. pic.twitter.com/7SP2uBUAXv

We bundled up and loaded ourselves into his hybrid open-air work truck/snowmobile, which Sudo floored, claiming improved traction, though I sensed I was seeing his inner hot-rodder. He took me to a felled and burning white pine, part of a winter pruning that claimed more than a hundred trees. “I love trees, but they should have a purpose,” he said. Sudo, 40 on May Day, studied agronomy at Penn State. His early dream was to become a constitutional lawyer, but then the golf bug bit. His snow pants were caked in dirt.

By foot we climbed a gentle hill, sinking in nature’s white duvet, and reached the 14th green. First by shovel and at the end by gloved hand, Sudo dug his way through the powder until he reached his green green. The grass was alive! Upon seeing it, the course superintendent smiled like a schoolboy getting a yes for prom.

The club’s official opening day is May 12, but Memorial Day weekend is more like the real start of the new Kahkwa golf season. Between now and then, Sudo will keep an eye on the Masters like everybody else, along with the club’s cross-country trails.

The Erie Classic committeemen wore green jackets and gave one to the winner. When I got home from Erie, I asked Fred Couples, by text, what he remembered about Kahkwa. “The man who ran the event was incredible,” Fred wrote back, nodding to the late Ted Grassi. “He did a great job with all of us. It was a fun event. And I got my first green jacket there.” Fred won at Kahkwa in 1988 and in Augusta four years later. The old hands at the club remember Fred on their course. Now and again, as the Erie winter dissolves into spring, his name comes up. Hot-stove-league talk, Kahkwa-style.