The fate of East Potomac — a muni that fosters access, inclusion and growth — is up for a vote 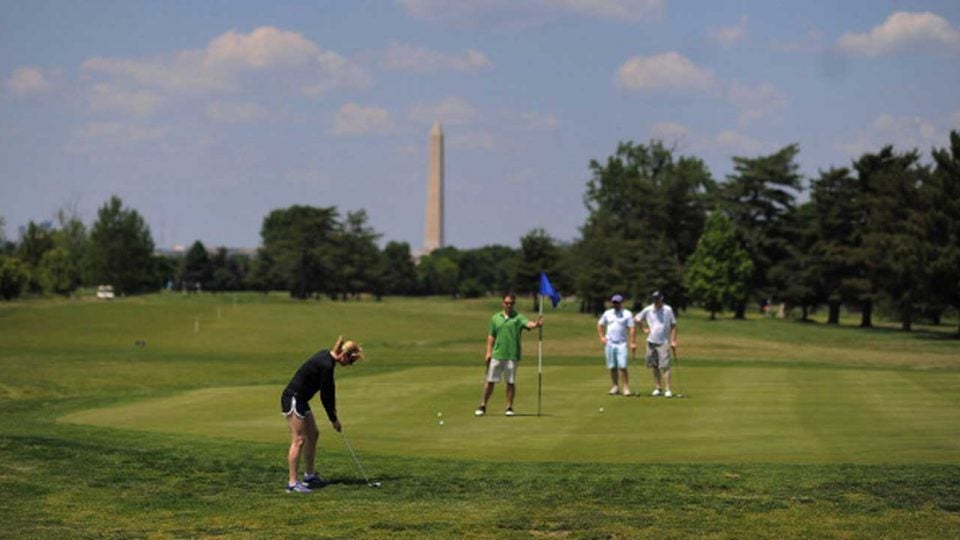 The starter paired us up on a recent, steamy Friday morning, and luckily, my playing partner knew the course. I didn’t need Google Maps to play the seventh hole, a slight dogleg left, just Sharon: Drive it down the right side, then take dead aim at the Washington Monument for your second. Welcome to the Blue Course at East Potomac Park!

The course has a celebrated pedigree (Walter Travis designed it in 1916), history (home track to Presidents Harding and Coolidge) and owner (the National Park Service). Through most of the long, painful, separate-but-unequal chapter of American golf, East Potomac was well-integrated, and remains so today. (Sharon is a black woman in her sixties with a 16-handicap and a perfect practice swing who stood 3 over on the seventh tee.)

There are two nine-hole courses beside the Blue Course, plus a tired driving range and a clubhouse and snack bar where I saw a golfer with two thermoses in his picnic bag, one for his soup, the other for his iced tea. True Everyman golf. The land is flat, the holes are ordinary, the traps are shallow, the greens are slow and the conditioning is only adequate. But the price is right ($35, walking), the pace is fine (Sharon and I played as a twosome in four hours) and on most nice days the Blue Course tee sheet is filled.

A for-profit outfit called GolfDC, which oversees every aspect of the 36 holes at East Potomac and at two other public courses in Washington, must be doing something right. About 40,000 rounds per year are played on the East Potomac Blue Course, slightly more than the number of rounds played at our nation’s most famous municipal, Bethpage Black. Now, for the first time in over 30 years, the National Park Service is making a concerted effort to find potential new operators for the three golf facilities under its watch in the nation’s capital: East Potomac, Langston and Rock Creek.

The introductory remarks to the formal Request for Proposals run 24 pages, and with the financial docs, the deferred-maintenance disclaimer and all the rest, you’re north of 300. But here’s a Park Service sentence we can all understand: “We’re looking for an operator who’s committed to providing affordable and easy-to-access golfing, to improving facilities and courses and to preserving the unique histories and landscapes of each of these courses.” Well, amen to all that, even the archaic use of golfing. (Let’s go golfing!)

By October 2020 a new deal is supposed to be in place. GolfDC could get it again. Another group, grandly named the National Links Trust, hopes to implement what Travis had in mind originally, for the Blue Course to be reversible. Other groups are expected to enter bids. Wherever it winds up, Kim Thomas, a GolfDC owner, hopes the courses will continue to be a place where kids, especially, get bit by the bug. “If you hit a ball on the range, you’re a golfer in our eyes,” Thomas will tell you. That’s a good view. Golf needs to open its arms wider.

Tom Doak, the iconoclastic architect, would be willing to work on a Blue Course renovation on a pro bono basis, even though he knows a common refrain after renovations is this: I liked it better before. When we talked about the Blue Course the other day, Doak said, “The course is busy — maybe they should just keep it as is.” But he sees its potential.

One of Doak’s former shapers, Mike McCartin, wrote a master’s thesis about golf at East Potomac and will be part of the National Links Trust bid. He doesn’t consider Bethpage Black to be an example of what the Blue Course could be. But he says the kinder, gentler Bethpage Red is. He also cites a few other public-course inspirations: CommonGround, outside Denver; Goat Hill, in Oceanside, Calif.; and Winter Park, near Orlando. Also, the Old Course.

In that vein, here are two of my favorite munis, both of them with sandy bones: Pacific Grove, which shares a coastline with Pebble, and North Palm Beach, down the street from Seminole. I’m eager to see what if anything happens with the planned renovation of Cobbs Creek, a city-owned course in Philadelphia designed by Hugh Wilson, Merion’s resident genius. Public golf is where it’s at.

Speaking — rhapsodizing — about the Blue Course, McCartin says, “It doesn’t cost more to maintain an interesting, cool golf course than it does to maintain what’s there now.” That may not actually be true, but a person can dream, and should.