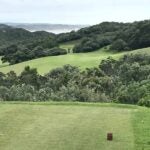 A view of the 6th hole at East London Golf Club in East London, South Africa.

Our knowledgeable crew of course raters have played golf just about everywhere. Many of those courses you’ve probably heard of, but some are less renowned — at least for most golfers. In Best Course You’ve Never Heard Of, we celebrate those sneaky-good designs.

The three giants of South African golf over the past century have been Bobby Locke, Gary Player and Ernie Els. It is a measure of the calibre of East London Golf Club, situated on South Africa’s east coast, that all made their mark here — Locke and Player winning the SA Open in 1937 and ‘67, respectively, while a 16-year-old Els prevailed at the SA Amateur in 1986.

A discussion of South Africa’s best Golden Age courses will always start with Durban Country Club and Humewood — the country’s only true links — in Port Elizabeth. But East London certainly belongs at the top of the next rank. Sadly, few golfers — whether South Africans or visitors — make it the extra 300 kilometers up the coast from Port Elizabeth. A pity, as it is a real gem that repays the effort.

Alister MacKenzie’s influential trip to Australia in 1926 is rightly celebrated. But the 1929 visit to South Africa by Colonel S.V. Hotchkin (best known for his work at Woodhall Spa and West Sussex) surely bears comparison. Hotchkin can claim credit for Humewood and East London, and his influence extends to other prominent clubs including Durban Country Club, Mowbray in Cape Town and Maccauvlei, on the Vaal River.

East London has until quite recently hosted European Tour events, though at 6,600 yards it is too short a test for today’s pros, unless the wind is really blowing. But for most amateurs, there is more than enough challenge and charm packed into this length. Similar to the better parts of Durban CC, the course is defined by dunes and coastal bush. While there are a few less memorable holes when the routing moves inland (7, and 14-16), for the most part the dunes are integral to the course.

The best quality golf is found on the front nine. The standout holes are the par-3 2nd, where you hit from a high dune to a sea-level green buffeted by a side wind, and the rolling 4.5-shot 3rd, which is faintly reminiscent of 3 and 5 at Durban CC.

Holes 4-6 are a great selection of short two-shotters involving interesting angles, elevation challenges and one totally blind tee shot on No. 5. All linger in the memory. No. 8 is a curling dogleg to the right while the 9th is another fabulous 4.5-shot hole with a blind drive over dunes into a funneled fairway. The second nine is less memorable but does include the star on the course — the par-4 12th, where the fairway swoops down to the left before ascending steeply to a green situated between two dunes, with the Indian Ocean just behind.

The 18th is also a memorable finishing hole with a blind drive to a heavily undulated fairway, leaving only a short iron to the green, albeit with peril on either side.

A fun and memorable course — sea views, wildlife, wonderful trees, eminently walkable — and all for under $30 a round.