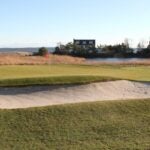 Our knowledgeable crew of course raters have played golf just about everywhere. Many of those courses you’ve probably heard of, but some are less renowned — at least for most golfers. In Best Course You’ve Never Heard Of, we celebrate those sneaky-good designs.

On an early fall day in September 1938, a hurricane known as the “Long Island Express” blew 150-mph winds over Katharine Hepburn’s waterfront Connecticut home. The storm ravaged the starlet’s property and left her belongings strewn across neighboring 9-hole Fenwick golf course. Hepburn was an enthusiastic golfer and passionate about this course, situated at the confluence of the Connecticut River and Long Island Sound.

Fenwick was laid out on a spit of land jutting into the Sound between 1894-1896, making it the oldest public course in the state. It is a quintessential hidden gem in plain sight. Fenwick’s tale of the tape looks easy on the scorecard as a 2,904-yard par-34 course, but tiny greens and capricious seaside winds make surgical iron play necessary.

A round immediately begins with a nod to faith as the shingle-sided St. Mary’s-by-the Sea Chapel (1896) greets the golfer beginning their round.

The 200-yard 2nd offers beautiful views, and many eyes will gravitate toward the ancestral Hepburn estate situated to the right of the green. The 155-yard 3rd is notable for a skyline water view behind the tiny fallaway green and the large yawning bunker left of it.

The short par-5 4th is terrific fun. The tee on the Cape-like hole is perched high on the waters of South Cove as the fairway bends to the right. The farther your ball can carry over the water the shorter your second shot and chance for eagle.

The 6th and 9th holes are historical footnotes to the round. On that solemn morning before the 1938 hurricane hit, Hepburn aced the 153-yard 6th where a ridge obscures the bottom of the flagstick. Her joy was obviously short-lived, as no one had an idea of the devastation to come mere hours later.

As Fenwick’s longest hole at 545 yards, the par-5 9th is the subject of legend — it’s rumored Howard Hughes landed his plane on the fairway to pick up Hepburn for a date.

So that’s Fenwick! Beautiful views, a classic layout with testy greens and bunkering all for a $20-30 9-hole rate. I spent several rounds here in the 10 years I lived in the Nutmeg State. As the sportswriter who recommended it to me said, “Just go play Fenwick and you will love it!” He was right.