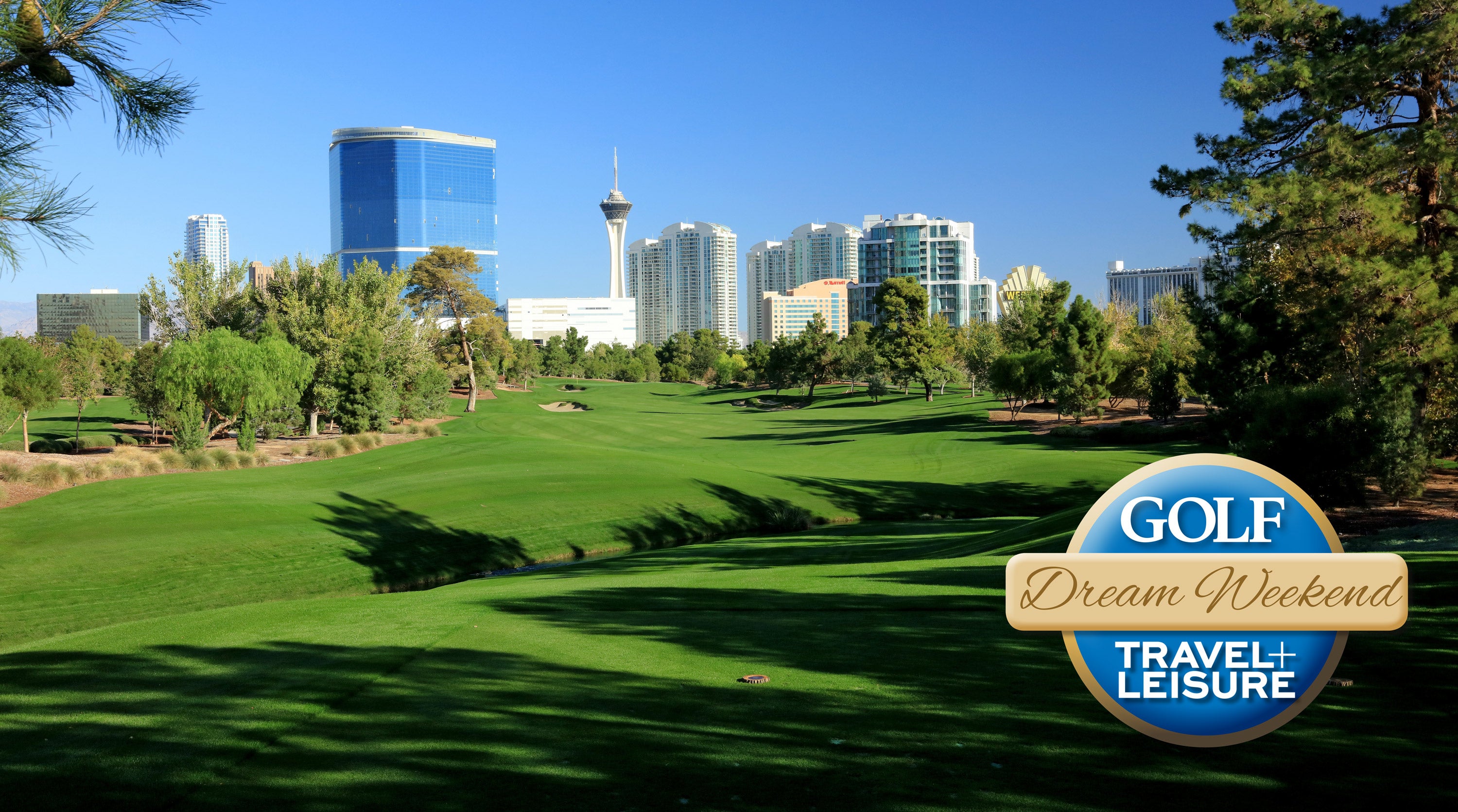 Plan your next trip with our new Dream Weekend series, combining expert picks from GOLF.com’s Joe Passov and the travel gurus at Travel & Leisure. We’re bringing you the best recommendations for golf courses, hotels, restaurants, and sightseeing–so you can focus on your round instead of your itinerary. Now on the tee: Las Vegas.

Clanking coins, spinning slots, flashing neon and yes, pricey golf are Sin City staples. However, if you’re craving a little more action than your usual two-dollar Nassau at home, a trip to Las Vegas is a must.

Travel and Leisure Tip: Many locals take flight during the searing-hot summers, but ample misters by the pools (and low, low hotel prices) make summer a fabulous time to visit. It can get chilly in winter, but flower-filled conservatories make Vegas seasonless.

We get our first golf game in this afternoon, on the day we arrive. Even if you’re jetting in from the East Coast to McCarran International Airport (LAS), you’ll gain three hours, so it’s no problem getting in with time enough to squeeze in eighteen. Complimentary limos have drivers waiting at the baggage claim to pick up high rollers—and since it’s my perfect weekend, that’s how I’m going—but if that’s not the profile you fit, it’s an either/or whether to take a cab or rent a car. The cab ride to a Strip hotel is short (10-15 minutes) and cheap (under $25). But if you’re going to play more than one round of golf at outlying courses, you’ll probably save money by renting a car instead of paying multiple huge cab fares.

First stop is Bellagio (January weekend rates from $199-$349), a 5 Diamond-rated MGM/Mirage property in the heart of the Strip that’s fronted by an eight-acre lake. The lake comes complete with its own fountain, music and light show. Trust me, it’s more tasteful than it sounds. Drop your bags off, as Vegas rooms are almost never ready until 3 p.m., then head south on Las Vegas Boulevard for one gigantic city block. Our destination is Wynn Golf Club at Wynn Las Vegas Resort, a lightly played Tom Fazio creation, both due to its price tag ($300-$500), and to the persistent rumors that owner Steve Wynn wants to shut it down and stick a hotel expansion in its place. We can buzz around in short order and have plenty of time to refresh for the evening activities.

Wynn’s compact holes are cocooned by more than 15,000 pines and shrubs, and water features grace 11 of them, notably the par-3 15th, which is guarded by a wishbone-shaped stream and the par-4 18th, its putting surface backdropped by a 37-foot waterfall.

Dinner is at Rao’s, next door at Caesars Palace. A Vegas outpost of the legendary 11-table, Harlem, N.Y. dining establishment, where reservations are nearly impossible, this Rao’s replicates the Sopranos-like ambiance admirably—and it’s a lot easier to get in. Uncle Vincent’s Lemon Chicken or a veal chop parmesan served on the bone—with a side of Rao’s meatballs—we’re talking real Italian here.

Witching Hour: To the Tables

We’ll save any show for Saturday night. Tonight is a casino hang. Whether your game is poker, blackjack, slots or something more exotic, a dazzling array of choices awaits, whether downtown, on the Strip or beyond. Heck, after your great Rao’s meal, stay at Caesars, for vast options, high limits, classic ambience and a legendary sports book.

Travel and Leisure Tip: Check out the Mob Museum in Downtown Las Vegas, which opened a few years ago on the anniversary of the 1929 St. Valentine’s Day Massacre in Chicago. It has one of the most comprehensive timelines and collections of mob memorabilia anywhere, thanks in part to the cooperation of some old Vegas family members.

It’s quick and hearty breakfast time and Hash House A Go Go will satisfy. With five Las Vegas locations, including one at the LINQ Hotel on the Strip, there’s one wherever you are. Sage Fried Chicken and Waffles is a great start, but if you’ve had one of those kinds of nights, perhaps spring for the O’Hare of the dog, a 24-ounce Budweiser in a bag, with a side of bacon.

If you’re a high roller and your MGM/Mirage-branded hotel knows it, you might wrangle a tee time at their fabled Shadow Creek layout, Tom Fazio’s masterpiece of near-fantasy proportions. Imagine the flattest, dullest site possible, wave a wand, and voila, a lush, rolling Florida/Carolina combo to blow your mind. Only the distant mountain views remind you you’re in Vegas. For a purer desert golf experience, head to Boulder City for Cascata ($195-$395), 35 minutes from the Strip. Avid golfer Alice Cooper calls Rees Jones’ engineering marvel “a great target course, with maybe the premier clubhouse in town,” and I have to agree. With its superb cuisine and a river running through it, the clubhouse is in a league of its own. Keep it straight and the course is conquerable, with firm, fast greens and run-up shots the norm, but stray and you’re up with the Bighorn sheep on the rocky desert slopes that frame every fairway. A forecaddie assigned to every group will help you navigate.

If one Saturday round is plenty, go back and unwind in a private cabana at Bellagio’s Mediterranean-themed pool, complete with private patio, HD TV, Wi-Fi and waiter service. However, January in Vegas can be on the cool and breezy side, so a spa visit for a Signature Stone Massage might be the better option.

We’ll come back to Saturday’s dinner, but if you’re still craving more golf, don’t let a lack of daylight dissuade you. Angel Park, with two Arnold Palmer championships 18s some 20 minutes from the Strip, also doles out a range, a 12-hole, par-3 replica course called Cloud Nine and an 18-hole all-grass putting course—all three of which are lit for night play. Add a cocktail or three to the putting experience and you’ll be amazed at how good you are—or how good you think you are.

If dinner’s on tap, you’ve got to do a classic Vegas Steakhouse experience at least once. The trouble is, there are so many great choices, from chains to one-offs, it’s hard to narrow it down. So let’s do a true original, the Golden Steer Steakhouse. Dating to 1958, and situated on the once-again trendy north Strip, the Golden Steer has entertained Ali, Elvis and Sinatra, among others. Joe DiMaggio had his own booth there. With dark wood and red leather accents, this is the quintessential old school beef and booze emporium. Jumbo shrimp cocktail, tableside Caesar salad, 20-ounce T-bone—perfect time-warp fare.

OK, if you’re bound and determined to see a major Vegas show, you’ll have to do dinner earlier (or later), because the late shows each evening start at 9:30. Las Vegas offers every flavor from Blue Man Group to Carrot Top (both at the Luxor), but the best musical production show is LOVE, a Cirque du Soleil Beatles retrospective at the Mirage. If you’re of a certain age, you’ll know every song.

Travel and Leisure Tip: Go shopping at Crystals, the glittering mall in the 76-acre mixed-use development of City Center, where you’ll find the first Tom Ford women’s collection in the U.S., a recently expanded Gucci store, a massive Tiffany & Co. with a proposal balcony, cinematic features like Fendi’s scale model of the Trevi Fountain, a full fashion runway in Roberto Cavalli, and an 8,000-crystal horse sculpture suspended from the ceiling at Stella McCartney.

You should stick around town long enough to try a diet-busting Vegas Sunday brunch. The Fountains Brunch at Jasmine, at Bellagio, the Sterling Sunday Brunch at BLT Steak at Bally’s and for less aggressive appetites, the House of Blues Sunday Gospel Brunch at Mandalay Bay are three favorites among many outstanding options. However, these meals seldom get underway until mid-morning, and we’ve got more golf to play. Instead, take in the killer Strip view from Mon Ami Gabi at Paris. Try the Bananas Foster waffles. The pairing is memorable.

With one final round to play before you board the plane, do it at Bali Hai ($159-$334), on the southern tip of the Strip. And do it soon, because there’s talk a-plenty that the course will close in the future to make way for an NFL football stadium. The Schmidt-Curley creation is a fun, eye-catching layout and its proximity to the airport (10 minutes) makes it the perfect getaway round, even as the planes fly so close, you can hit a flight attendant with your backswing. Strong par-4s, eye-candy par-3s and the tropical theme of blindingly white bunkers, palm trees and water features form the resort appeal, while the gleaming backdrops of the pyramid-shaped Luxor and the Mandalay Bay beckon in an only-in-Vegas way.

Save time before your flight to sample Cili, Bali Hai’s clubhouse restaurant, which for my money—not that I part with it often—is the best golf-attached dining experience in the country. With its American/Asian fusion cuisine and patios that overlook lagoons, you won’t want to leave. Spend a few more quarters at the airport, celebrate your birdies, and say good bye to a perfect weekend.

Travel and Leisure Tip: Hop in the car for a 20-minute drive west into the Red Rock Canyon Conservation Area, the nearly 200,000-acre desert wonderland with more than 30 miles of hiking trails, rock climbing and mountain biking. Of the many trails, the 6.3-mile hike to Las Vegas Overlook is one of the most spectacular—and manageable for most fitness levels.